I cannot lay claim to this concept.  It was suggested to me by PLW, who heard it on a podcast by Daniel Duval, a righteous man who teaches the Truth through his radio program.   It makes a lot of sense to me, and I thought I would pass it on to you for your consideration.
It seems to me that much of the Church is awakening to the thought that the Pre-Tribulation Rapture doctrine might not be in God's playbook.  I confess to a non-denominational approach to the Bible, so I'm not sure which branches of the Christian Church have, or have not, adopted this teaching, and it doesn't really matter -- the point of this essay is not to criticize, but to examine the reasonableness of this argument.
DISCLAIMER:  I do not claim to be an expert on this subject, or to know God's thoughts, or to be privy to His counsel.  I don't believe anyone can say for certainty, based on Scripture, when this event will happen.  In fact, I have been part of various Bible study groups where Pre-Trib, Mid-Trib, Pre-Wrath, and Post-Trib Rapture positions have each been successfully defended using Scripture.  Only God Knows! 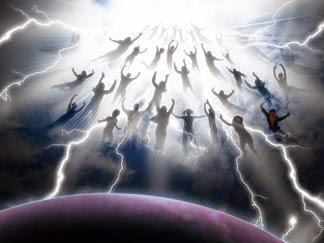 So I am not going to present a detailed thesis on the emotional and historical reasons for holding the Pre-Tribulation position.  I have done that in a post titled, The Tribulation: A Sensitive Subject.  This time, I want to approach the subject from a different perspective; taking all emotion out of it.
For starters, I would suggest that all Believers would prefer to be taken out of this world before the Great Tribulation descends upon mankind; before the earth and all its inhabitants become the recipient of God's wrath.  That's a very rational desire.
But try to look at the timing of the Rapture from God's perspective.  The one thing we can all agree upon, and which is verified without a doubt in Scripture, is that there will be a time of great distress, tribulation, and persecution on the earth before Jesus returns, right?  And we know that God desires that "none should perish", correct?  The final part of this equation is the fact that "the saints" will be raptured -- whenever that event might occur.  So who and what constitutes "a saint"?
The word “saint” comes from the Greek word hagios, which means “consecrated to God, holy, sacred, pious."  According to Ephesians 4:12, the ministry, or work, of the saints is to "build up the body of Christ", which I take to mean encourage, grow, or strengthen.  So, can we agree that those raptured will be God's "A-Team", so to speak?  Those who have lived a life in service to Him and His Son.
Now, let me see if I can paint a picture of the End Times scenario .... the world has become increasingly wicked, and the influence of the Devil has grown to great proportions.  Satan has his counterfeit political system (embodied by the Anti-Christ and his Beast administration); his substitute economic system (Mark of the Beast); and his false religious system (run by the False Prophet).  All of these systems will be persecuting everyone who does not bow down to the false god, Satan himself.
But, let's go back to one of the foundational principles of God's character ... he desires that none should perish.  Why would he take his A-Team out of the game, just as the competition for souls is at a fever pitch?
And you need to understand this VERY IMPORTANT POINT:  I do not believe that the Western Church today is aware that we are in a Spiritual War.  We look at the horrific actions of ISIS, the conflict in the Middle East, and our own national crises, and we think we are fighting against evil men of the world.  But we are fighting a SPIRITUAL WAR, and when we are faced with the Tribulation, God's "A-Team" will be trained in spiritual warfare.  They will know how to rebuke a demon; they will know how to stand against the powers of the air; they will understand the Enemy in all his facets.
If they are taken out of this world at the beginning of the Tribulation, how do those left behind have any chance of resisting the Anti-Christ?  With a lack of God's saints and representatives, wouldn't all men perish?  Doesn't it seem more logical that God would want his "A-Team" to be in the thick of the spiritual battle -- in full "ministry mode" to help plant the seeds of salvation for every one of His creations?
Doesn't it make sense that we will be at our most valuable to God's Kingdom during that time of Tribulation?  Won't our willingness to endure and to suffer for Christ, if necessary, be the greatest testimony to convince an unbeliever to resist the devil and accept God's gracious gift of salvation?
As I said at the beginning of this post, I do not proclaim to know the time of the Rapture, but I feel safe in asserting that our service to God, His Church, and His Kingdom will never be more valuable than during the Tribulation.  God wants as many to accept Salvation as will.  At what point He will achieve His "full number of Gentiles", I cannot say.  But whenever that happens, He will pull His people out of the earth, because "we are not appointed to suffer wrath" (1 Thessalonians 5:9).
So, in conclusion, let me say this ... no man knows God's timetable or His strategy.  Is it a specific number of saved that must be reached?  Will it coincide with one of the Lord's Feast days?  No man can tell; certainly not me.  But this I do know ... It will be a joyous day; a day that will be the culmination of living a faithful and obedient life unto the Lord; the first day of all eternal days, in which we will live with the Lord.  Any suffering, persecution, or tribulation will be worth it!

1 Thessalonians 1:10   "when He comes, in that Day, to be glorified in His saints and to be admired among all those who believe, because our testimony among you was believed."