The Grammy's: Was Anybody Fooled?

I recorded the annual Grammy extravaganza, honoring (supposedly) the best in the music industry.  I was well aware of the satanic symbology in past years and wanted to see how far they were willing to go this time to influence the culture and our youth.  I was only able to stomach the presentation because we must be knowledgeable of how cunning the Enemy is, if we are going to defeat him.
The music industry is a multi-billion dollar enterprise, and wields extreme influence over the youth of our nation.  Do you pay attention to the music that your children listen to?  You should.  It has been a very lucrative and fertile ground in which Satan has been able to place his emissaries.  And prime time spectaculars like the Grammys give him an opportunity to showcase his satanic message to millions of vulnerable minds.
I have to say the 2015 Grammys was a strange mix of "in your face" and "false piety".  I'll save you the need to watch it for yourselves, and give you the highlights, so you will be enlightened as to the tactics of the Luciferian occult.  The two-hour production began with a performance by the aging hard rock band AC/DC singing their hit "Highway to Hell" -- complete with a backdrop of burning flames and audience members sporting illuminated devil horns.  I'd say that accomplished exactly what the occultists behind this awards show intended. 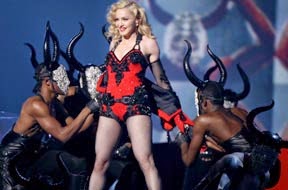 Also singing during the curious mix of old and new, was the band ELO, singing "Evil Woman", which was quite apropos, with respect to the much anticipated appearance of the (also) aging Madonna.  Just in case you missed the hidden occultic theme, Madonna made sure you couldn't avoid who was really being celebrated on the stage.  She surrounded herself with a cast of male dancers, all displaying Baphomet horns and bejeweled masks, as they danced around their priestess.  Madonna made sure that the goat-god, who is the symbol of the Church of Satan was impressed upon our minds -- down to the point that they offer her up to their Master and she ascends into the sky.
So, I figured this was how it was going to play out ... an entire night of blatantly and aggressively saluting the devil.  But then the show seemed to shift gears, as if making the statement, "We've showed you who we bow down to; now we want you to know that we worship just like you... we're not all that different." 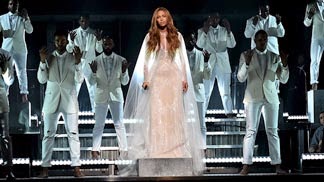 Both Beyoncé and Katy Perry, the princesses of the Illuminati, appeared in virginal white gowns, on all white stage sets.  Beyoncé sang "Precious Lord, Take My Hand", dressed as a bride with an all-male choir behind her in a robotic posture, hands raised.  Katy Perry, appeared in a demure, high-necked outfit and sang "By the Grace of God".  For a moment, one might wonder if these women raised in God's Church have returned to their pre-Illuminati Christian roots.  But don't be fooled! Whether their performances were meant as a mockery of the True Faith, or to deceive the shallow into believing they honored YHWH -- remember it was a production!
Billy Hallowell, the Faith Editor of The Blaze, reports that "Perry, who was once a Christian singer and whose parents are pastors, publicly renounced her faith, telling Marie Claire in a 2013 interview that she’s no longer Christian and doesn’t believe in heaven, hell or “an old man sitting on a throne.” Perry did say that she believes in a higher power — a paradigm that holds her accountable."
Based on her earlier confession that she "sold her soul to the devil" to make it in the Music Industry -- and her 2015 Super Bowl performance, in which she took the stage riding on a robotic beast -- we can guess what higher power she pays allegiance to. 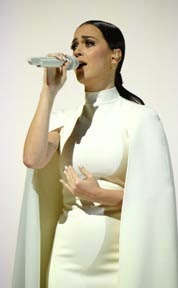 Marie Claire also reported that Perry gets her connection to spirituality through the writings of Eckhart Tolle, an author known for his popular books about metaphysics and spirituality. She also practices transcendental meditation, a form of mantra meditation.  In case you are unfamiliar with who Eckhart Tolle is, he was made famous as Oprah Winfrey's guru-like spiritualist, who makes such narcissistic statements as this:  "To know yourself as the Being underneath the thinker, the stillness underneath the mental noise, the love and joy underneath the pain, is freedom, salvation, enlightenment."  In other words he spreads a false gospel of self-worship.  Unfortunately talented artists in the music industry have traded any real chance at salvation for the lure of fame, wealth and power that the Illuminati promises in exchange for worshipping their Master and god of sin.
But any Christ-centered observer wasn't fooled by the veil of piety that attempted to deceive the audience into a benign judgment of the show.  The more obvious performances left no doubt who was being worshipped, while singing old Christian hymns or new homages to the grace of God doesn't mean YHWH is their God.  There are others who are far more educated than I about the symbology that was beamed into millions of homes across our country.  I simply want to warn you not to dismiss the tremendous impact that music today has upon our younger generations, and guard against the blatant blasphemy that is being presented to them in the name of popular music.

1 Timothy 6:9-10    "But they that will be rich fall into temptation and a snare, and into many foolish and hurtful lusts, which drown men in destruction and perdition. For the love of money is the root of all evil: which while some coveted after, they have erred from the faith, and pierced themselves through with many sorrows."
Posted by Pam Kohler at 7:00 AM