The Human Spirit Will Prevail

They cannot defeat us.  As I have recently mentioned, there are so many headlines pointing to the disintegration of peace on earth, the sanctity of human life, and a technological future that defies my understanding.  All the events taking place today are designed to undermine our faith in God and in each other.  But today, I'm going to share some uplifting stories.  They will prove that no matter what darkness Evil wishes to impart upon the world, the part of us that is connected to our Creator will always shine His light into the shadows.  These stories are of simple acts of kindness; stories that are sincere examples of the "fruit of the Spirit" ... and yes, evidence of the Holy Spirit working in the lives of 21st Century Christians is still evident.  Enjoy these testimonies and celebrate! 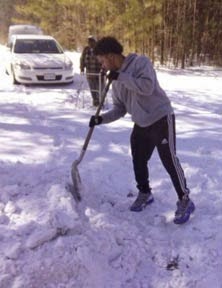 From WTVR, Virginia:  The weather has hovered around 16 degrees in Nottoway County, Virginia for the last few days, and the snow has been piling up, with more expected in the coming week.  Teresa Adams was driving her son, Tommy, to high school where he is a Senior, when he suddenly asked her to stop the car.  At first she was frightened, not knowing what was going on or what he had seen.  It happened to be an elderly gentleman who was out in the snow, with his walker, trying to clear the piles of snow from his driveway that had been deposited by a county snowplow.
Tommy asked the elderly man to give him the snow shovel and he proceeded to spend the next 15 minutes shoveling the deep snow from his driveway.  “He said ‘God bless you, the world needs more people like you,'” Tommy recalled.  But Tommy's motivation was simple:  he saw a need and reached out to help.  “I try to do good for the elderly because one day I may need help, too,” he said.
In this age, most kids Tommy's age are glued to their cell phones, and they are not cognizant of anything that does not impact their immediate domain.  But Tommy's simple act of kindness speaks volumes; it suggests that our human spirits still respond to the needs of others.  How proud Mrs. Adams must be of her son!

From WTHR, Bloomington, Indiana:  This is a story of an elderly woman, Caroline Senour, who was literally stuck in her home due to the heavy snows and below-freezing weather.  She felt physically trapped in her small apartment; the 80-year-old has a history of falls and feared that venturing outside her apartment on the icy sidewalks to get to her snow-covered car presented a clear danger to her health.  The trouble is, she was beginning to run out of her store of food.
Then came the knock on the door.  Andy Scherle, the property manager at Woodbridge Apartments, has a heart for caring about his elderly tenants.  He made a huge pot of chili and enlisted the aid of the apartment complex housekeeping staff to check on the elderly and deliver them bowls of the hot chili.  "I like to check up on them and see how they're doing, especially when it gets this cold," Scherle said. "I don't want to wait for a health check from family members if we can be the ones to go check first. Showing up at their front door, putting a smile on their face, it lets them know you actually do care and you're not there just to collect rent and see them on the first."
The simple act of kindness was not lost on Caroline.  "It almost brought tears to my eyes," she said. "I was just so surprised at the generosity and thoughtfulness. It feels like you're not stuck here and you're not all alone. You just don't see that quite often, do you?"  No, Caroline, you don't.  But it is more evidence that the spirits of human beings have not been completely desensitized by the culture, and our elderly are still honored and respected.  Good job, Andy Scherle! 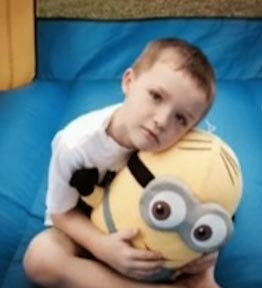 Finally, From WKMG, St. Cloud, Florida:  Glenn Buratti is a 6-year-old little boy with Autism.  It was his birthday and his mother had invited all 16 of his classmates to his birthday party -- but no one showed up.  "To see the look on his face killed me inside," said his mother, Ashlee Buratti.  Glenn was so devastated that no one was coming to his party that he refused to smile.  Her heart breaking, Ashlee wrote a post on her Facebook page, describing how much it hurt to see her son so disappointed.  What happened next shows that the human race is still ... well, human.
Almost immediately, strangers began arriving with their children and gifts.  The Osceloa County Sheriff's department saw Ashlee's Facebook post and dispatched their helicopter to do a fly-over of Glenn's impromptu party.  The deputies also pooled their money and bought the little boy birthday gifts.  As for the heartsick mother, she says the response from her one post on Facebook has almost been overwhelming, but has restored her faith in a higher power and the human spirit.  "The amazingness of everybody coming together for someone that they didn't even know," she said. "A kid that didn't have anybody come to his birthday party ... It warmed my heart."

Now, these stories are not earth-shattering, nor are they likely to change the course of our human nature.  I am not trying to present a rosy picture of life or lessen the technological threat about which I will continue to warn you.  I truly feel that the rapid advancement and integration of computers into our lives has served to isolate us and detach our feelings from our fellow man; and where we are headed truly frightens me.
But I wanted to relate these human stories to show that no matter how "technologically advanced" or "unified" we become with our computerized culture, our spirits are made to respond to each other's needs.  That's the part of Himself that God implanted in our DNA when He created us.  The futurists can try to deny that concept as they forge ahead with their plans, but anytime that a human being recognizes the needs of another, he is showing us a picture of God -- something that no computerized being can replicate.  Yes, it may only be a shovelful of snow, a bowl of chili, or wishing a little boy "Happy Birthday" --  but I hope these stories put a smile on your face.  The world needs a little picture of kindness, don't you think?

Micah 6:8   "He has told you, O man, what is good; and what does the Lord require of you but to do justice, and to love kindness, and to walk humbly with your God?"
Posted by Pam Kohler at 7:00 AM