The Faith Of A Child

I want to share the inspiring story of a little Iraqi Christian girl, whose name is Myriam.  She and her family were among 400 Christian families who fled before the onslaught of ISIS in her home country.  She now resides in a half-built mall in the Kurdish capital of Erbil, in northern Iraq.
The Christian Post reports her story as she is interviewed by a correspondent from SAT-7, a Christian satellite television network broadcasting in Arabic, Persian, and Turkish across 22 countries in the Middle East and North Africa, along with 50 countries in Europe.  She was among a handful of children specifically questioned about how she felt having to flee her home.  The program will air on SAT-7 KIDS, which aims to make Christian programming available to an entire generation of Arab children, and is seen by an estimated 9.25 million viewers on a regular basis.  That is an amazing fact that I was unaware of, and which gives me great hope.  But it was the light in Myriam's eyes that touched my heart.
It is Myriam's astounding faith that comes across on the video.  (Please take the time to watch this; it is only 3-minutes long.)  As the reporter asks what she misses most about the life she left behind, she responds, "We used to have a house and were entertained, where as here we are not.  But thank God. God provides for us." 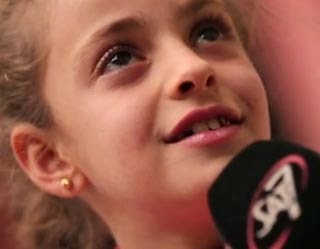 The reporter was a bit perplexed by Myriam's comment and asked what she meant by "God provides for us."  She explained, "God loves us and wouldn't let ISIS kill us."  The reporter followed up by asking Myriam what she would do if she ever had the opportunity to retaliate for ISIS' onslaught of her hometown.  "I won't do anything to them," Myriam asserted. "I will only ask God to forgive them."  It is obvious by looking into her eyes, that she is wise beyond her years.  But what obedience to our Lord!  She truly knows her Scripture and God's command to love our enemies.  And what a follower of Christ, who asked God to forgive His enemies, "for they know not what they do".
After the interview, the reporter thanked Myriam for her time. Then, Miriam replied, thanking him for his sympathy.  "You felt for me," she said. "I had some feelings and I wanted people to know how I feel."  I dare you to watch the video and not be moved by the ending, as the children are heard singing, "My love for my glorious Savior will increase with each new day. A new life, a happy day, the day I reunite with the Lord."
As I listened to Myriam speak about her life on the run from ISIS and her unwavering faith in God, I was most impressed with her emphatic "Yes!" to the question if she could really forgive ISIS.  I couldn't help thinking, Could we American Christians be so obedient?  Does the Body of Christ in America have as close a relationship with God as these Iraqi Christian children?  Do we comprehend the gravity of this statement by Christ: "Truly, I say to you, whoever does not receive the kingdom of God like a child shall not enter it."?
I have to tell you that I am extremely blessed to be a part of a small group of people who have been willing to step outside their comfort zones to seek a greater understanding of the God we serve.  For the past 4 years, our group has grown in our faith, as we have struggled to understand God's Truth through the study of the Books of Revelation, Daniel, and now Romans.  It is hard to put into words, but I have seen people's lives change as the Bible has come alive for them, and their spirits have soared with the intimacy they have encountered with God.  They have let their minds see past the traditions of men, allowed their hearts to be opened beyond the words of men, and searched their Bibles for the promises of Christ and their God.
I have seen them go through stages that are similar to the grief process... beginning with anger at the misconceptions and flawed teachings of their particular Church; followed by a realization that they have been lax in reading their Bible and seeking the Holy Spirit's guidance; and finally, I have witnessed a newfound hunger for a righteous relationship with God, as well as a conviction that through personal and diligent study of God's Word, they are closer to knowing Him than ever before.
On the other hand, I can't tell you how many Christians I know who just can't let go of their denominational doctrine, or who are scared (or too pre-occupied with things of this world) to look at something they are unfamiliar with.  And that's what worries me about the ability of the Body of Christ to withstand the physical persecution and the spiritual warfare that the Bible tells us is coming.    How many of the Body are truly prepared for persecution?  For spiritual warfare?  How many Christians can recite Paul's warning in Ephesians 6 that we are not wrestling with flesh and blood, but against spiritual powers and forces of wickedness; yet do not discern that we are empowered through our union with Him to fight them?  They know the call to put on the whole armor of God, yet they aren't "ready" to pursue greater knowledge of who or what they will be fighting!
Revelation 19:7-9 tells us that the marriage supper of the Lamb is about to take place, and His bride has made herself ready.  But how many of those who count themselves the Bride are truly "ready"?  How many can say that they earnestly study what the Bible says about preparing ourselves?  Or do they rely on what their man-made doctrines have taught them, and refuse to look at the unexplored Word of God?
I confess that I am far from satisfied with the state of my spiritual character, or the state of my readiness.  I want to divest myself of all my prideful assumptions and the false instruction that I have heard, read or seen; and I want to plead the power in the blood of Christ over my life.  I don't want man's interpretation of the Word; I want to discern the clear and loud voice of the Holy Spirit.  I want the simple, emphatic, unconditional, and unyielding faith of young Myriam.  I want to receive the kingdom of God like a child.

Matthew 21:16      And they said to Him, Do You hear what these are saying? And Jesus replied to them, "Yes; have you never read, Out of the mouths of babes and unweaned infants You have made (provided) perfect praise?"