Will Winter Storm Juno Be Another Judgment? Should We Be Surprised?

As I have noted in the past, whenever we disrespect the nation of Israel, we have received terrific blows from the hand of God.  What do "the Perfect Storm", Hurricane Andrew, the Northridge Earthquake, the Texas Floods, Hurricane George, the 1999 "Super Tornado", and Hurricane Katrina all have in common?  Each of these events came after a deliberate action by the United States government against the nation of Israel.  For more details on the exact offenses, click here. 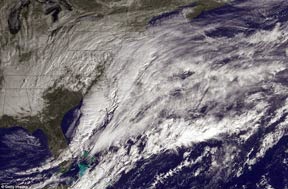 So are we about to receive another judgment in the form of Winter Storm Juno?  And exactly why would it be justified?  It seems that the White House is once again at odds with Israeli Prime Minister Benjamin Netanyahu, announcing that the President will refuse to meet with him when he visits the U.S. in March to address a joint session of Congress.  Now, that might seem like just a diplomatic faux pas to you, but the deliberate disrespect, contempt and scorn that our President holds for the nation of Israel has long been in evidence.  And this time it is coupled with what appears to be plans by our government to continue negotiations with Iran over their nuclear program; a program that Israel fears is aimed directly at them.  Is this a clear-cut case of sacrificing Israel's safety, in favor of forging ahead with a vague and ill-defined relationship with Iran -- a nation that has vowed to destroy our ally?
It is impossible for us simple citizens to discern the motives behind this foreign policy; but it doesn't really matter what we think, does it?  It is more important how God views it; how He discerns the intentions of mens' hearts.  He has made it very clear that judgment will come against those who curse Israel.  What exactly does it mean that God will curse those who curse Israel?  In Biblical terms, it means God reveals His judgment (in some manner) against those who try to break or harm his covenant with the nation of Israel.  I would say that continuing to negotiate with Israel's enemy (Iran) puts God's chosen people in danger, and threatens to destroy their very existence.  I would say that could be considered as breaking the covenant in a most conclusive way.  Furthermore, insulting Israel's leader won't win us any favors in heaven, either.
Will Juno prove to be the manner in which God passes judgment upon our nation?  It remains to be seen.  We may have an answer over the next 48-76 hours.  As I write this, the historic storm is making itself felt, and is being described as packing "a tidal wave of snow"; as a crippling blizzard.  Governors across the northeast are calling for states of emergency and travel bans, as massive power outages are expected, along with 2-4 inches of snow per hour and hurricane level winds.  Boston is expecting 30 inches of snow; and this storm is anticipated to effect nearly 60 million people!
There are those who will claim that Juno is simply a freakish display of Mother Nature, or the result of our disregard for the planet.  If it matches its forecasted impact, and becomes a storm of historic proportions, then perhaps it is time to recognize that we've once again offended the apple of God's eye.  How much longer before His patience runs out and our final judgment comes due?

Joel 3:2    “I will also gather all nations, And bring them down to the Valley of Jehoshaphat; And I will enter into judgment with them there On account of My people, My heritage Israel, Whom they have scattered among the nations; They have also divided up My land.”
Posted by Pam Kohler at 7:00 AM