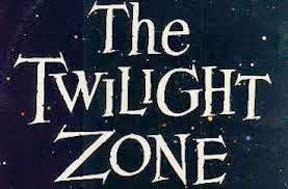 The title of this blog post is taken from a famous episode of The Twilight Zone; that strange TV series of the early 60s that showcased the genius of its host, producer, and writer, Rod Serling.  As so often, with TVs and Movies, we can see predictions of the future, as if the producers know something that we don't, and are surreptitiously either warning us, or gloating, over their superior knowledge.
I think you will find this particular episode of the anthology series rather interesting. As Mr. Serling introduces the opening scenes of the show, he describes a feeble little man (Mr. Wordsworth) standing before a tribunal of the State.  As the Narrator, Serling announces, You walk into this room at your own risk, because it leads to the future; not a future that will be, but one that might be. (Camera pans to Narrator) This is not a new world: It is simply an extension of what began in the old one. It has patterned itself after every dictator who has ever planted the ripping imprint of a boot on the pages of history since the beginning of time. It has refinements, technological advancements, and a more sophisticated approach to the destruction of human freedom. But like every one of the super states that preceded it, it has one iron rule: Logic is an enemy, and truth is a menace. (Camera switches to the convicted man) This is Mr. Romney Wordsworth, in his last forty-eight hours on Earth. He's a citizen of the State, but will soon have to be eliminated, because he's built out of flesh and because he has a mind. Mr. Romney Wordsworth, who will draw his last breaths in the Twilight Zone.
It appears that Mr. Wordsworth has been declared obsolete because the State has outlawed books.  Therefore, his job as a librarian, is no longer needed.  However, as his name declares, this librarian still sees worth in words, and he will not give up his occupation easily.  But notice the response of the Chancellor of the State:  Since there are no more books, Mr.Wordsworth, there are no more libraries, and, of course, as it follows, there is very little call for the services of a librarian. Case in point: A minister. A minister would tell us that his function is that of preaching the word of God. And since it follows that since The State has proven that there is no God, that would make the function of a minister quite academic as well....
The good Mr. Wordsworth then loudly proclaims that THERE IS A GOD!  To which the State angrily replies that they have declared there is NO GOD, and therefore his opinion, as well as he, himself, are obsolete.  Mr. Wordsworth responds by saying, "I don't care!  I am a human being!  I exist ... and if I speak one thought aloud, that thought lives, even after I'm shoveled into my grave.
The State shouts back, DELUSIONS! The Bible, poetry, essays, all kinds, all of it are opiate to make you think you have a strength, when you have no strength at all!!!  After some further derision of Wordsworth's delusions of the human state, the Chancellor and his Board of the State passes judgment on the humble little man.  Mr. Wordsworth is pronounced obsolete and he is to die, in a manner of his choice, in the next 48 hours.  But he has another plan.... 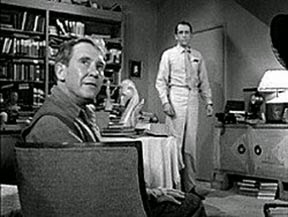 He asks to be able to choose his own method of death, and that it take place in his apartment.  This is rather unorthodox, but the request is granted, and he invites the Chancellor to meet with him just prior to the carrying out of the sentence.  The Chancellor accepts and finds the little man surrounded by the books he loves so much, and which the Chancellor abhors.  A discussion ensues, whereby the Librarian and the Chancellor discuss the lessons learned from the State under Hitler and Stalin; how they dealt with people they deemed obsolete and undesirable.  The Chancellor gloats, But their error was not one of excess it was simply not going far enough! Too many undesirables left around, and undesirables eventually create a corp of resistance. Old people for example, clutch at the past and won't accept the new. The sick, the maimed, the deformed, they fasten onto the healthy body and damage it. So WE eliminate them! And people like yourself, they can perform no useful function for The State, so...we put an end to them.
The little Librarian lets the Chancellor rant about how proud he is of the methods they use to eliminate useless people and how proud he is that it is televised so that the rest of the citizenry can see it is useless to fight the State.  Then the little Librarian reveals his secret plan ... he had decided to die by a bomb exploding in his apartment.  The Chancellor is then horrified to find that the door has been locked and he cannot escape; apparently he will suffer death along with the Librarian.  He then calmly asks the Chancellor how he plans on spending his last moments before dying?  As for himself, the Librarian, sits down in a chair and begins to read from this beloved Bible:  The Lord is my Shepherd, I shall not want .... Defend me from them that rise up against me. Deliver me from the workers of iniquity and save me from the bloody men. For lo, they lie in wait for my soul... The fool that said in his heart"There is no God". The Lord looked down from heaven upon the children of men to see if there were any that did understand and seek God...  (There are tears in his eyes).
By this time, the Chancellor is panicking, and screaming, In the Name of God, let me out!  In the last seconds before the bomb goes off killing the Librarian, he tells the Chancellor, Yes, in the name of God, I will let you out.  The next scene is of the Librarian sitting calmly in his chair, clutching his Bible, as the Chancellor cowers in fear under the stairs.  The bomb explodes and is televised across the country.
The next image is of the Chancellor entering the Court Room of the State, where the crowd is chanting, Obsolete!  Obsolete!  He is pronounced guilty of disgracing the State, being a coward, and therefore serving no function.  He is dragged, whimpering from the room.  We next see Serling, as the Narrator, pronouncing, The chancellor, the late chancellor, was only partly correct. He was obsolete, but so is the State, the entity he worshiped. Any state, any entity, any ideology that fails to recognize the worth, the dignity, the rights of man, that state is obsolete. A case to be filed under "M" for mankind—in the Twilight Zone.

This particular episode originally aired in 1961.  That's over a half century ago, and yet in God's timeline, it is barely a blink of His eye.  Do you not think that He knows the schemes of men and the spirit of Satan that lives in the wicked?  And men like Rod Serling must have been given great discernment to try to warn us of the days to come.  The themes that included the totalitarianism of the State, their efforts at euthanasia, collectivism, and the destruction of God and religion in society were way ahead of their times.  I invite you to watch the full episode on Youtube, and to read the entire manuscript.  I think you will find that we are seeing the culmination of Evil's ongoing plans to destroy the relationship between God and man.  It is worth your consideration, and still gives ample warning, these 53 years later.  Enjoy!

2 Corinthians 2:16-17   "To the one we are the aroma of death leading to death, and to the other the aroma of life leading to life. And who is sufficient for these things? For we are not, as so many, peddling the word of God; but as of sincerity, but as from God, we speak in the sight of God in Christ."