Yesterday, I promised to take you further into the conspiracies of the Elite ... at least what I think we should consider to be a possibility.  For awhile now, the world has wondered what was up with China's "Ghost Cities".  And you may think this is old news, but that question has never been answered, and I believe it is important to keep it in the spotlight.  Again, I'd like to thank the website, Inquisitr, for doing an excellent job in connecting the dots in this quandary. 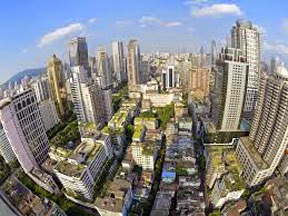 Allegedly, these "Ghost Cities" are said to be "part of the sustainable development plans outlined in the United Nations’ Agenda 21 initiative."  Remember, as I pointed out yesterday, sustainable living is OK to participate in, as long as it is controlled by the Government or the Elite.  How dare you think that you can partake of this lifestyle through your own initiative!
So, what's the plan for these cities in China that boast energy conscious buildings, shops, and apartments, yet remain unoccupied and empty?  First, let's establish some facts, as stated by Inquisitr:  The United Nations’ Agenda 21 program is a voluntary, non-binding action plan which is allegedly focused solely on sustainable development. Adopted by 178 countries in 1992, the plan is based upon a program to abolish poverty and protect “fragile environments” by “properly” managing cities. America is a “signatory” country to Agenda 21. Since the plan is a non-binding statement and not a treaty, a vote on the initiative was not necessary. In the United States, more than 500 large and moderate-sized cities are members of an international sustainability organization that reportedly supports the implementation of Agenda 21.
Now, back to China's empty "sustainable" cities.... The Agenda 21 China plan reportedly included measures to move “tens of millions” of citizens away from rural areas and into brand spanking new cities designed in a sustainable manner.  So what is the link between Warren Buffet, his Energy Plan to control our Energy Grid, and his attempt to capitalize on solar and wind power?  As far back as 2013, Dave Hodges, of The Common Sense Show, seemed to think there was a huge connection.
He pointed out that Former Secretary of the US Treasury and former CEO of Goldman Sachs, Hank Paulson appeared to be championing the Agenda 21 relocation going on in China.  “The country’s economy is heading in the right direction. This is more important than achieving short-term growth,” Paulson said of the eco-cities and urban growth in China. McKinsey and Company Global Managing Director Dominic Barton also heralded the changes going on in China. “The good news is that there is an underlying force of growth and that’s urbanization. What we’re basically seeing is more than 250,000 people moving from rural areas to cities every week,” Barton said.
So, now consider this scenario .... if a country could influence (or enforce) the relocation of its populations to the cities, and away from rural living, couldn't they better control not only their energy use, but the population, itself?  So, doesn't it sound like they are equating urban living with economic growth?  Furthermore, does it stand to reason that if states like Texas, Florida and North Carolina (which happen to be inhabited by some of the most freedom-loving Americans) can restrict the off-grid lifestyle and force every home to be connected to the Energy Grid, that it is a step towards discouraging rural living and independence?  Wouldn't that make it easier to control the American population?
You may think that I am stretching things a bit ... that "control" is not the issue; that it's only about "sustaining" and "conserving" energy.  But look behind the curtain, and I think you will see something else; something far more sinister that will ultimately lead to the loss of our personal property and our right to choose how we live our lives.  Is it pertinent to ask the question, "As goes China's "Ghost Cities", so goes America's cities, townships, and urban areas?"