Samuel Adams: Where Are You Today?

Being a lover of the history of our Founding and the American Revolution, I eagerly awaited The History Channel's miniseries, titled Sons of Liberty.  I had no illusions that history would be presented accurately, but was curious to see how Hollywood would represent the main characters of our nation's early history; especially Samuel Adams, who has always been a favorite of mine.
My assumptions were correct ... the facts were skewed; the timelines were often off by years; and the circumstances surrounding the colonists' grievances were repeatedly exaggerated.  For instance, General Thomas Gage's appearance on the scene is ten years later than historical fact; there is no evidence of any relationship between Mrs. Gage and Dr. Joseph Warren; and Samuel Adams was not some dashing young hero, free from family obligations, as depicted in the miniseries.  At the opening of the first episode, in 1765, Sam Adams would have been 43, and the father of two surviving children from his first marriage (his wife died young, along with four other children who died in infancy).  He had remarried and was deeply involved in the politics of the day.  These are just a few of the many dramatizations and misrepresentations of the miniseries.
Furthermore, Sam Adams was far from being the drunk scoundrel, who owned a tavern frequented by misfits, as the History Channel portrays him.  True, he was an inefficient tax collector; but he was quite successful, within political circles, in urging his fellow colonists to oppose the unjust tax measures being enforced by the King of England.  As for the Sons of Liberty, they were more than impoverished hotheads itching for a fight.  They were a secret society of colonial patriots who were committed to protecting the rights of the colonists and to fighting the abuses of taxation by the British government. 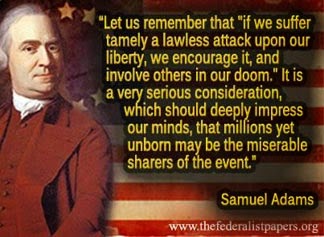 And speaking of unjust taxes, the broadcast missed a huge opportunity to educate any young people who might have been captivated by the dare-devil antics of the Hollywood version of Sam Adams.  There was no real attempt to mention the various Acts imposed by the British Crown to keep the colonists in tow.  As a member of the Caucus Club, one of Boston's local political organizations, Adams was incensed over the 1764 Sugar Act, which imposed a tax on Boston merchants for their purchase of molasses.  He began a writing campaign, attacking the Sugar Act as an unreasonable law. Adams argued that the law violated colonists' rights because it had not been imposed with the approval of an elected representative.  He argued that there should be "no taxation without representation"; a slogan which would become a lightning rod in the colonists' ever-increasing desire for independence.
For the next decade, Adams continued to write essays concerning the growing divide between England and her colonies.  He condemned the Stamp Act of 1765, which placed a tax on printed materials throughout the American colonies.  During this time he was elected a member of the Massachusetts legislature, and would serve in that capacity until 1774.  In the meantime, he continued his fiery essays against the Townshend Acts of 1767, which placed customs duties on imported goods.  None of this was mentioned in the miniseries; only the celebrated Boston Tea Party, which saw the colonists refusing to pay the taxes levied by the Tea Act of 1773, and subsequently dumping the tea in Boston Harbor.
(Consider this:  I recently watched a TV survey of college students who could not identify which country we won our independence from.  The History Channel could have served a greater purpose with this fictionalized account of history, don't you think?  Lord knows, I was ashamed at the realization that our youth have lost all interest and knowledge in the narrative of our country.)
I understand that action sells better than politics, and I am not disputing the role that a passionate and dedicated Samuel Adams played in the years preceding the opening shots at Lexington and Concord.  It is indisputable, as the miniseries portrayed, that he played a dynamic behind-the-scenes role in urging the populace and their colonial leaders towards independence.
In fact, history has always been fascinated with the part he played in securing our Liberty.  During the 19th Century, when America still clung to her patriotic principles and valued an individual's liberty and right to succeed, Samuel Adams was recognized as a hero of the Revolution.  But the 20th Century saw the genesis of socialism and progressivism taking root in our political consciousness, and Sam Adams gained a negative reputation.  His brilliant essays were viewed as propaganda, and he was painted as an avid promoter of revolution who incited mob violence to push his political agenda.    Today's Progressives would likely call him a "domestic terrorist"; even the modern Tea Party movement, which has become part of his legacy, is disparaged and impugned.
But whichever version of Samuel Adams you choose to embrace, no one can dispute that he played one of the most important roles in the founding of this nation.  He believed in a "republican" form of government, which advocated that power should be held by the people and their elected representatives, rather than a monarch or dictator.  His writings also show that he believed that force against the government of a nation was only justified when the constitutional rights of the people were threatened, and were so grave that the "body of the people" recognized the danger, and only after "all peaceful means of redress had failed."  Revolution was his last choice.  But shortly after he signed the Declaration of Independence, he delivered these words in a speech at the State House in Philadelphia:

"If ye love wealth better than liberty, the tranquility of servitude than the animating contest of freedom, go from us in peace. We ask not your counsels or arms. Crouch down and lick the hands which feed you. May your chains sit lightly upon you, and may posterity forget that ye were our countrymen."

How we need Sam Adams today!  He was able to see the road to Liberty perhaps clearer than any other patriot of his time.  He was able to speak boldly and plainly to the people, championed public virtue in the culture and politics, and believed strongly in a true representative government.  He continued to serve his country in the First and Second Continental Congresses, and was instrumental in drafting the Bill of Rights.  Although The History Channel dramatized only the early days of his political involvement, and much of their storyline was inflated and blurred the historical facts, I am loathe to completely condemn the presentation.
I believe the miniseries captured the spirit of those passionate days ... days when God placed the right men, at the right time, in the right place.  God had a plan for this nation, and He raised up men like Samuel Adams and Paul Revere and Dr. Joseph Warren and George Washington to lead mankind into a new era.  These men were able to breed a desire in their fellow countrymen to live their lives as free men; exercising their Natural Rights to Life, Liberty and the Pursuit of Happiness.
It is my hope that The History Channel's excessive and outrageous version of Samuel Adams's life encourages our citizens of all ages to seek more knowledge about him and the American Revolution.  And I further hope it awakens them to just how glorious and miraculous is our history.  The politics of that day were just as controversial and embattled as they are today.  But there burned a fire in the hearts of men that I fear we've lost.  May God rekindle His Spirit in our nation, and the Spirit of '76!

Psalm 33:12   "Blessed is the nation whose God is the Lord, the people whom He has chosen as His heritage!"