What's Happened To The Rule Of Law?

It is just my opinion, but I am willing to speculate that one of the primary reasons this country has been a beacon for immigrants in the nearly two-and-a-half centuries of our existence is that we have represented a fairly consistent pattern of restricting the arbitrary exercise of power by subordinating it to well-defined and established laws.
There ... I just gave you the definition of "the Rule of Law".  History shows that this land was a magnet for people who dreamed of escaping tyranny -- from the Pilgrims, who were escaping political and religious persecution, (as well as imprisonment), for charges of treason against the Crown; to South Africans who longed to break free of the apartheid injustice of a ruling party who, with extreme intent, demolished anything that got in the way of its legal and political agenda.
It is also my opinion that, from the beginning of time, societies and civilizations have succeeded because people recognized the need for a moral and legal set of rules by which to live.  They have succeeded economically, socially and politically when they have respected the authority and influence of law; law which is described as "a system of rules which are enforced through social institutions to govern behavior." (Wikipedia).
But that success and harmony only continues to exist when laws, (or constraints on behavior), are equally observed by the populace and the governing officials.  Why do you think that we have had tens of thousands, perhaps even hundreds of thousands, of illegal immigrants flock to our southern border in the last year or so?  They are escaping the tyrannical rule of corrupt politicians and dictators, the uncontrolled dominance of drug cartels, and the unrelenting violence of civil wars within their own countries --- all the result of a lack of the Rule of Law. 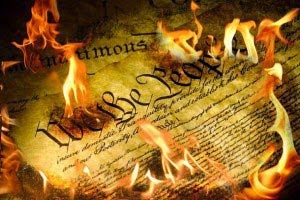 In other words, when the government of a nation decides that the instituted laws of that nation no longer apply to them, then there is not only the threat of injustice to the citizens, but a complete breakdown of their individual security, economic stability, and personal freedoms.
When any government body, or individual, decides that they can arbitrarily ignore the established laws, and exercise power at their will, then the Rule of Law no longer exists.  In effect, laws are a check (or curb) on that autocratic power.  When they are breached, the freedom we have known under the law, becomes insubstantial.  There is a profound deterioration of individual rights, in the wake of a growing power of the State.  That makes liberty-lovers a little nervous.
Here in the United States, it has been accepted that all government officers, including the President, the Justices of the Supreme Court, state judges and legislators, and all members of Congress, pledge first and foremost to uphold the Constitution. It has also been understood that these oaths affirm that the Rule of Law is superior to the rule of any human leader.  But when law-makers determine that they are no longer subjects of the law, then chaos ensues.
We have seen that with the Fast and Furious debacle, the imminent "amnesty" issue, and I fear that we will see it set forth from the Ferguson, Missouri incident, as well.  To be sure, we have a problem with the Rule of Law being appropriately honored and administered in this nation.
But let me drop a little bug in your ear ... our Rule of Law is not only being diminished from within our own country's framework, and by our own governing leaders, but could all this "lawlessness" soon come under the jurisdiction of the United Nations?  Let me explain ...
Did you know that International Leaders from around the world convened about a year ago for what was called "the Bangkok Dialogue on the Rule of Law"?  Apparently, the UN has Millennium Development Goals, and the Rule of Law is a hot topic towards achieving those goals.  In fact, at the heart of the United Nations’ agenda is its role as the guardian of international legal frameworks.  That means that they, ideally, want to determine what our Rule of Law should be.
Keeping that in mind, here is the UN's definition of the Rule of Law:  the rule of law refers to a principle of governance in which “all persons, institutions and entities, public and private, including the State itself, are accountable to laws that are publicly broadcasted, equally enforced and independently adjudicated, and which are consistent with international human rights, norms and standards”.
Since when has America ever considered herself as following "standards or norms", as dictated by other entities?  Isn't that exactly why immigrants are streaming to our shores?  Never mind that our nation's Rule of Law was founded on Christian-Judeo principles of a "Higher Law" than man's laws; that our individual rights and liberties were established by our Creator, and are not subject to the whims of a  human ruler.  When that principle is forgotten, we are left with this reality:  "Behind every legal order there is always a god, be it God Himself or those who have control over the state machinery." (RJ Rushdoony, American philosopher, historian and theologian).
Ultimately, we are in danger of losing our unique Rule of Law in this country.  We have abandoned the Source of our Liberties, and forgotten that God's Higher Laws are above the laws of any man.  It's simple, really ... we, as the people of our nation, along with those we have chosen to protect our Rule of Law, must decide what kind of authority we want as the source of power over us.  Do we want the authority of God-instituted laws; the control of an "international body", such as the UN, to mold us to an acceptable standard; or do we want the authority of a mere human ruler, who seeks his own power, instead of glorifying God's laws?
I think we've taken our unique Rule of Law for granted too long, and assumed it would always exist.  But when men put their laws above God's; and seek their will, instead of His, then the legality of laws don't really matter -- only the end results that uphold a man's power and authority.  That's when we are in danger of replacing laws with illegality, and we cease to exist as the land of the free.  How much longer before our Rule of Law vanishes altogether?