And as for you, O My flock, thus says the Lord God: Behold, I judge between sheep and sheep, between the rams and the great he-goats [the malicious and the tyrants of the pasture]. 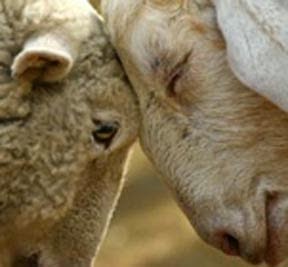 As always with Scripture, we must be careful to approach it within the larger context of a passage or Chapter.  Today, we consider Ezekiel, Chapter 34.  Ezekiel, as God's prophet, has been told to prophecy against the shepherds of Israel -- even to the Spiritual shepherds.  These "shepherds" are the kings, judges and rabbis of the nation of Israel.  And through Ezekiel, the Lord God asks the important question, "Should not the shepherds feed the sheep?"
In other words, these leaders of the nation of Israel have been given a great responsibility by the Lord to watch over His people.  But God brings a severe condemnation against them.  These leaders, rather than guard and protect the people, and leading them to prosperity, have, instead, fattened themselves.  God comes against them with several accusations:  those who were weak or sick were not helped; those that were handicapped by life's struggles were not encouraged; and the civil leaders of the nation did nothing to lift them up.
These allegations extended to the religious leaders as well:  those that strayed from the faith, or whom have not been taught the faith at all, have not been sought and corrected.  In fact, all leaders fall under a blanket charge of negligence and dereliction of duty.  Indeed, they have not tended to "their flock" with the care and encouragement that God desired.  Instead, they have seen to their own selfish needs, and dealt with the people by force and hardened hearts.
So, God says He will take care of His flock Himself.  He will gather them and feed them, Himself, causing them to "lie down".  This is a very important piece of information, regarding God's "flock".  It is significant to understand four things about sheep:  1)  they refuse to lie down unless they are free of all fear; 2)  they will not lie down unless they are free of friction with others of their kind;  3)  they will only lie down when they can relax and be free of pests;  4)  they will not lie down as long as they are hungry and in need of food.  So God says HE will meet all these needs of His flock, and will feed the leaders both judgment and punishment.
But He is not through!  God also has a word for the sheep, themselves!  In our chosen Scripture, He clearly states that He is addressing the sheep, as well as the leaders (Rams and He-Goats).  There are those within the flock, itself, that have not done their duty.  He is talking to those that belong to Him who have prospered and are comfortable in their favored position.  He wants them to understand that this does not alleviate their compassion or acts of charity towards other members who are less fortunate.  "Belonging to the flock", does not mean you that you're home free, with no responsibility towards others.
Just a few verses later, God declares, "I Myself, will judge between fat sheep and impoverished sheep, or fat goats and lean goats ... Therefore will I rescue My flock, and they shall no more be a prey; and I will judge between sheep and sheep."  God means to rescue the nation of Israel, not only from the world, but from themselves.
How does this apply to us?  Will not we, as the Gentile nations, also be judged?  Won't our judges and kings and presidents be held accountable as to how they treated God's people?  Furthermore, what does this Chapter and passage say to us Christians?  We are also part of God's "flock".  And when He says He will "judge between sheep and sheep", what do you think that means for us?
Might it mean that just being called "Christian" isn't enough to escape judgment? Our Christian lives -- how we served God, and how we encouraged (and aided) others of the faith -- will be scrutinized.  We must never think of ourselves as above reproach or reprimand.  And notice that He is talking to the "sheep"; not the shepherds here.
God knows that our Pastors have enough to answer to Him for not feeding His sheep.  But what have we sheep done for the flock?  Have we endeavored to encourage those new to the faith, so that they will have no fear when it comes to declaring their faith? Have we made sure that we are not causing friction within the Body of Christ?  Have we been diligent about keeping "pests" out of the Church; those who seek to introduce destructive doctrines to the flock?  And lastly, have we truly "fed" fellow members of the flock; or have we simply slapped the label of "Christian" on them and left them starving for the Word?
God wants his sheep to feel safe and secure enough to "lie down".  It is our duty -- and should be our privilege -- to provide these services, not only in obedience and praise to our God; but in loving support of the flock.  It is incumbent upon each of us to ask how He will judge our ministry to His flock.