If you've been a reader of my blog since the beginning, then you will know that I have a wide variety of interests.  You will also know that I'm a proud member of "Gun Culture 2.0."  This terminology was coined by Michael Bane, The Outdoor Channel's well-known "adventure-seeker" and gun expert.  Bane wanted to separate those who used firearms through the traditional methods of hunting, the military, or law enforcement (Gun Culture 1.0) from those individuals who came to firearms through the Concealed Carry movement, the growing interest in Self-Defense, or the various shooting sports.
Additionally, women have become the fastest growing segment of Gun Culture 2.0.  Since I own a CC license, and decided that I wanted to know how to competently and safely protect myself with a handgun, I qualify for membership in this exclusive group.  And it has been my privilege to have received some of the finest training in the country. 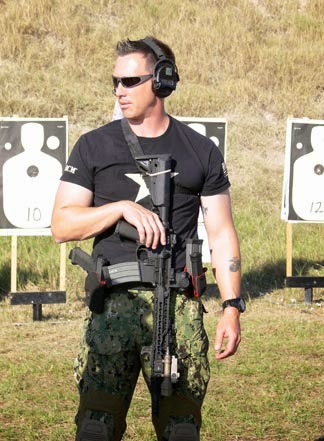 I happen to be blessed to have access to some great instructors who have, themselves, trained with the best.  Who better to prepare you to defend yourself in a gunfight, than someone who experienced gunfighting up-close-and-personal as a member of our superb United States military?  I also think it is important to give credit to those ex-military who are willing to share their time, knowledge, and expertise.  And there is none better than Travis Haley.  So when he comes to town, I'm reminded of just how much my husband and I owe this man.
If you want to know his credentials, they are readily available on the website of Haley Strategic Partners:  "Travis Haley is a veteran Force Reconnaissance Marine with 15 years of dedicated real world experience including: combat tours in Middle East, Africa and Central Asia."  If you read between the lines, it reveals how tough and aggressive he had to be during all those years of "real world experience."  In other words, he learned how to survive by being bold, working in close coordination with his unit, and a master of many weapon systems.
And when it comes to training responsibly armed citizens, he's been able to transfer his mastery of dynamic situations to us.  As a relatively new shooter, my level of competence exploded after I started training with Travis.  I have been fortunate enough that he chooses to include our outstanding local range on his yearly schedule, and I've benefitted from several of his pistol classes.
I'm pretty sure I'm an anomaly, when it comes to his average student.  I'm new to the world of firearms; new to training (I began in 2011); always one of just a few women in his class, and sometimes the oldest.  But, to Travis, I'm the same as the LEO, the young military veteran, or my competitive, experienced husband; he doesn't cut me any slack.  He's encouraged me to never accept mediocrity, to push past my failure points, and to continually evolve, in order to become a better shooter and a better person.
This time, he came to our little corner of Texas to instruct Carbine classes.  Since I am new to the AK platform, and progressing through my local range's carbine courses, I am not qualified for Travis's pairing of a class on Carbine weapons manipulation in and around vehicles (both in daylight and darkness), and a Carbine Team Tactics class that involved coordinating movement, negotiating obstacles, communication, and shooting with others.  However, my husband, Peace-Loving Warrior (PLW - that is really what his given name means!) has been waiting for the Team Tactics course all year!
As the next level of his training, he was anxious to learn from Travis how the civilian population could responsibly train to defend themselves as part of a group.  As always, he was not disappointed.  The course is described as "high risk" and "physically demanding", just the kind of challenge that PLW and his fellow students were looking for.  It was intense; at times, rigorous and physically punishing.  But, as expected, it met the highest of standards that PLW knows is the hallmark of any Travis Haley class. 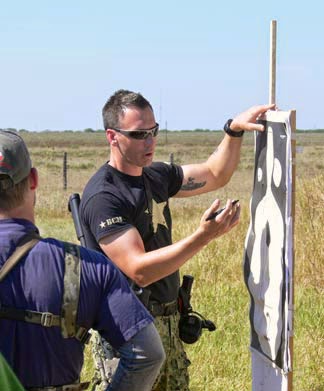 Let him tell you in his own words:  "The way Travis teaches is so dynamic.  You can take the same course three different times, and because his system is always advancing and always fluid, Travis is forever searching for the hard answers.  He methodically breaks them down into small achievable, baby steps.  These series of steps, when applied in order, create a well-rounded and capable shooter who can now use this information to self-critique and practice their gun skills and gun manipulations.  He just creates a thinking environment that produces a very high level shooting experience."
As I observed the class one afternoon, it struck me how much it must take for Travis to organize and systematize training for civilians who are responsible gun owners.  We don't have the experience he has, nor the hours of weapons handling.  He can't just show up at our range and say, "Follow the Leader" or "Watch, and Do What I Do."  He has to break it down; think like a civilian would; reconstruct each step that he does, automatically and mechanically; and then try to instruct 15-20 people (all with different learning styles and skill levels), so they can grasp it and apply it.
But that is what makes him such a sought-after instructor.  I watched as he drilled the students on fundamentals -- over and over, building their muscle memory.  When they progressed to shooting from behind barriers as a 2-man team; or in the open field as 2-man, 4-man, and even 6-man teams, Travis drilled them repetitively.  You could see the metamorphosis; they began to gel, take shape, and came together, working as an efficient team.  Fatigue was not an option.  Problems with weapon manipulation or physical limitations were no excuse.  When you come to train with Travis Haley, he expects full-on commitment, and you expect it from yourself.  (And even though I wasn't participating in the class, it didn't mean I still wasn't learning from him.  I could listen to him share his experiences, or analyze a particular chain of events; and then watch him demonstrate how he would react in different scenarios ... there is always opportunity to gain knowledge; it's what you do with it that counts.)
Although there is only so much that can be accomplished in a 3-day course, I can tell you that PLW was grateful that Travis is willing to offer this high level of training to people who choose to be armed responsibly.  And, from my perspective, its nice to see the collaboration and synergy between the military and civilians.  There is much need, in today's national climate, for interaction, cooperation and mutual respect between these two groups.
And that's just one of the reasons that I'm glad our paths have crossed Travis Haley's.  He believes in what he's doing, and he really cares about helping you find your own path.  He believes in his students; and he's about growing you as a shooter, a person, and a contributor to the world.  He believes in pushing the boundaries, overcoming adversity, and invites you to create new territories in your own life experience.  For Travis, it's not just about being the best you can be at handling your weapons system; it's about being the best you can be at your life.  One way to become the best "you" is to experience Travis Haley ... he's a force to be reckoned with, and a life-changer.  Be bold, be challenged, and sign up for a class.  But be prepared to be transformed; you will never be the same.

Romans 12:2     "Do not be conformed to this world, but be transformed by the renewal of your mind, that by testing you may discern what is the will of God, what is good and acceptable and perfect."