Still Think Vaccines Are What They Say?

I'm sure many of you can identify with me ... someone asks me if I'm going to get this year's flu shot; or, God forbid, if Ebola becomes an epidemic in this country, would I volunteer to receive the Ebola vaccine?  When I unapologetically state that I would not -- that I don't trust what is in the vaccines -- I get that "Oh, so you're one of them" cynical smirks.  Sound familiar?
I don't even attempt to explain why, or to site statistics of the rise of cancer and the subsequent benefit to the pharmaceutical companies.  I don't even try to quote such World Elites as Bill and Melinda Gates, Ted Turner, David Rockefeller, or Prince Philip, who, deploring the number of human beings on the planet, has been quoted as saying, “In the event that I am reincarnated, I would like to return as a deadly virus, in order to contribute something to solve overpopulation.”
Well, perhaps this tidbit of news will cast some credibility on my decision to be selective about the vaccines I take.   LifeSiteNews.com reports that Catholic bishops in the African nation of Kenya are accusing the UN of sterilizing millions of girls and women under the guise of annilating neonatal tetanus by means of an inoculation program approved by the Kenyan government. 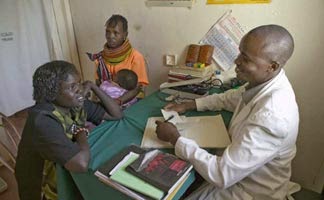 The article quotes Dr. Muhame Ngare of the Mercy Medical Centre in Nairobi, as saying, "“We sent six samples [of the vaccine] from around Kenya to laboratories in South Africa. They tested positive for the HCG antigen ... They were all laced with HCG."  HCG (Human Chorionic Gonadotropin) is an antigen that causes miscarriages in healthy women, and apparently its use was sanctioned and administered by the World Health Organization and UNICEF.  This action kind of makes a mockery of Unicef's declaration that "The chance to survive is a right owed to every child", doesn't it?
And it is hard to ignore the proof as provided by Dr. Ngare:  "The evidence was presented to the Ministry of Health before the third round of immunization but was ignored ... This proved right our worst fears; that this WHO campaign is not about eradicating neonatal tetanus, but a well-coordinated forceful population control [and] mass sterilization exercise using a proven fertility regulating vaccine."
Of course, you expect the same old government denial ... the vaccine is safe, and officials would even give it to their own daughters.  But Dr. Ngare is adamant in her claims that this is a secret anti-fertility campaign.  She cites the unprecedented five-shot regimen over a two-year period, which is primarily applied to only women of child-bearing years.  She further argues that the tetanus series is usually given as three shots over a 2-to-3 year period, and to men, women or children; anyone who comes into the clinic wishing to receive the tetanus vaccine.   “The only time tetanus vaccine has been given in five doses is when it is used as a carrier in fertility-regulating vaccines laced with the pregnancy hormone, Human Chorionic Gonadotropin (HCG) developed by WHO in 1992.”
So, how does it work?  According to the doctors and Catholic bishops, "HCG mimics a natural hormone produced by pregnant women, and causes them to develop antibodies against it. When they do get pregnant, and produce their own version of HCG, it triggers the production of antibodies that cause a miscarriage."
But this isn't the first time this particular vaccine with its prescribed 5 injections has been used in treating the world's population.  Miscarriages became rampant in Mexico in 1993, and Nicaragua and the Philippines in 1994 -- three years after this vaccine was administered by organizations like United Nations Population Fund and USAID.
And apparently the way the government is rolling out this vaccination campaign lends to suspicions as to its true purpose:  “Only a few operatives from the government are allowed to give it out. They come with a police escort. They take it away with them when they are finished."  As Dr. Ngare asks, if it is so safe, "Why not leave it with the local medical staff to administer?” 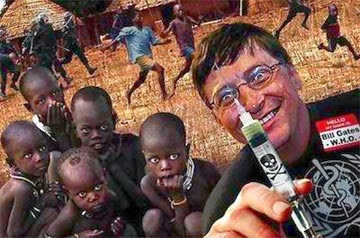 Could it be that what Dr. Ngare alleges is actually true?  That this vaccine has been purposefully designed to help control the population of the world?  What better place to start than Africa, which is home to approximately 15% of the world's population?  Would it shock you to know that LifeSiteNews had obtained a UN report on an August 1992 meeting at its world headquarters in Geneva in which 10 scientists from “Australia, Europe, India and the U.S.A” and 10 “women’s health advocates” from around the world, met to discuss the use of “fertility regulating vaccines.”  -- or that this very same UN report describes the “anti-Human Chorionic Gonadotropin vaccine” as the most advanced?
I know its hard for the average American to think that there is a global conspiracy to control the population of the world; and even harder to think that our own public health organizations could be involved with anything so sinister.  But this is bigger than trying to keep your flu symptoms on the mild side, or protect you from a case of shingles or pneumonia.  It's about power and money and the Elite controlling the masses.  Just listen to some of their own words:
Bill Gates, Founder of Microsoft and Billionaire entrepreneur:  "The world today has 6.8 billion people. That's headed up to about 9 billion. Now if we do a really great job on new vaccines, health care, reproductive health services, we lower that by perhaps 10 or 15 percent."
Penny Chisholm, Professor at MIT:  “The real trick is, in terms of trying to level off at someplace lower than that 9 billion, is to get the birthrates in the developing countries to drop as fast as we can. And that will determine the level at which humans will level off on earth.”
Paul Ehrlich, a former science advisor to President George W. Bush:  "Nobody, in my view, has the right to have 12 children, or even three, unless the second pregnancy is twins.”
Ted Turner, founder of CNN:  “A total world population of 250-300 million people, a 95% decline from present levels, would be ideal.”
Ruth Bader Ginsburg, U.S. Supreme Court Justice:  “Frankly I had thought that at the time Roe was decided, there was concern about population growth, and particularly growth in populations that we don’t want to have too many of.”
Margaret Sanger, Founder of Planned Parenthood:  “The most merciful thing that the large family does to one of its infant members is to kill it.”
John P. Holdren, President Obama's primary science advisor:  "The development of a long-term sterilizing capsule that could be implanted under the skin and removed when pregnancy is desired opens additional possibilities for coercive fertility control. The capsule could be implanted at puberty and might be removable, with official permission, for a limited number of births."
So, do you still think this is some kind of crazy conspiracy theory?  Or is the evidence in Africa, and the recorded words of powerful people, enough to make you think twice about letting some foreign substance be injected into your body?
Are all vaccines evil and subject to suspicion?  I'm not ready to make that broad statement.  However, I do believe that we are living in profoundly immoral and malevolent times, and I am cautious about subjecting my body, (which has been made in the image of God), to unknown causative agents that I'm supposed to trust are designed to keep me from harm.  I'm sorry, but there's just too much evidence to the contrary.  I'm going to trust the discernment I receive from the Holy Spirit.

Psalm 41:2-3   "The LORD will protect him and preserve his life; he will bless him in the land and not surrender him to the desire of his foes.  The LORD will sustain him on his sickbed and restore him from his bed of illness."