To Vote Or Not to Vote .... What Is Our Christian Duty? 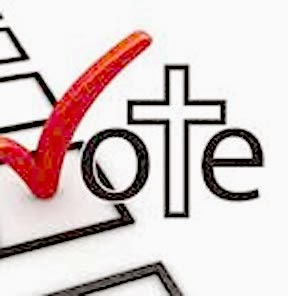 I think it's fair to say that most Americans are having conflicting emotions about voting in the mid-term elections today.  While we acknowledge that we are blessed to live in a country that still allows us to vote for our elected officials, we are rather disillusioned with the process.  We are tired of the false promises, the broken pledges, the voter fraud, the corruption that seems to be inherent in politics, and the fact that most elected office-holders end up not representing us at all!
In fact, I have heard more disenchanted talk this election cycle from people who take their civic duty seriously.  For the first time in their adult life, they considered not voting.  "It doesn't make an iota of difference", they say.  "The Republicans and Democrats are exactly the same.  It doesn't matter who wins -- nothing will change; we will get the same government."  I cannot dispute their logic.  So, is it important that we vote today?  Will casting a ballot earn us anything more than an "I voted" sticker?   Will we really have a say about what form of leadership we experience?  Or are higher powers really in control, and pulling the lever is inconsequential?
It may surprise you to learn that voting has been a part of the American experience since the settlement of Jamestown in 1607 -- and nothing much has changed in those 400+ years.  It has been a long, protracted experiment, with periodic changes, both expanding and contracting the enfranchisement of its citizens.  We are still tampering with the process!  Voting fraud has been common from the outset, with votes being bought and sold; and different states enacting their own voting laws, adding to the disorder and capriciousness of elections.
One could say it's been a messy business from the beginning, and it seems to be inspiring even less confidence today.  So, should we abandon the thought that it is our "duty" to vote?  If it's not going to change a thing, should we even bother?  If I was looking at the situation through the world's lens, I might be convinced to stay home.  But does God have an opinion?  Is the act of voting somehow important to Him, or is it man's effort to make himself seem relevant to a civilized society?
In the Old Testament we read of the Israelites' desire for an earthly king.  From that first appointment of King Saul, we learn that God is involved in those who rule the nations.  And it is clearly seen that the people usually get the kings/rulers they deserve.  If a people desire and take steps to live their lives according to Godly principles, then their choice of a leader is reflected in the governing of their nation.  But, far too many times, citizens of a country have strayed from the path God would have them follow, and they appoint a leader that, in essence, becomes a figurehead or icon  for their idolatrous ways.
Down through the centuries, history has shown us the repercussions of godless leaders.  But we only have to look at the last 100 years to get a picture of men who blatantly displayed their disregard for the God of the Universe ... Hitler, Stalin, Mao Tse-Tung, Pol Pot.   Based on how other leaders have performed their duties as heads of state, we can only imagine what they profess in secrecy.  So, with the evidence showing a preponderance of godless leadership, does God still want us to vote?
First, we need to understand that He is in control, regardless of the actions of sinful leaders.  And I think we need to consider our duty and responsibility to vote as a means of furthering His will by approving men with good Christian values.  We are commanded to pray for our leaders, and clearly directed to obey legitimately elected authorities, unless they specifically defy or contradict the Lord's commands.  (So please do not quote Romans 13 as proof that we are to follow godless leaders, no matter what).
So, can you see why it might be important to exercise your right to vote when laws concerning abortion, the establishment of marriage, or persecution of the faithful might offend God?  We, here in America, still have a voice for our Christian faith; unlike those who are being persecuted elsewhere around the globe.  But how much longer will we enjoy that privilege if we become complacent about voting for God-fearing men and women?  How long before it becomes against the law to preach the Gospel message in the public domain?  We still have the right and the opportunity to promote, protect, and preserve a government (and government leaders) that still recognize God as their Source of Power.
I think we can all agree that those choices are becoming less viable.  I believe that the government leaders we elect in the next two cycles will have profound influence on whether this nation remains touched by God.  That is why it is incumbent upon each of us to pray and to study the candidates and choose wisely.  The effects of our indifference about voting is apparent in the state of our nation.  When Christians stay home and/or remain silent in the political arena, we get the government we deserve; God hands us over to our desires.  If we stand a chance of getting this country back on track, then Christians need to stand up and be counted!

1 Samuel 12:13   "And now behold the king whom you have chosen, for whom you have asked; behold, the Lord has set a king over you."