Parents: Have You Taken A Look At Your Child's Homework Lately???

Over two years ago, in July of 2012, I began writing of the dangers of the Federal Government in our Education system, and their attempt to nationalize the content of instruction in every public school across the nation.  I warned that Federal programs such as CSCOPE and COMMON CORE were undermining American values and indoctrinating our children.
I followed up that post with one in February of 2013, pointing out the concerted efforts to teach our public school children that the Boston Tea Party was an act of terrorism; Christians were cannibals;  and that students were forced to draw a socialist flag while imagining a new socialist country.  At that time, I became aware that the most insidious deception involved the teachings surrounding Islam. 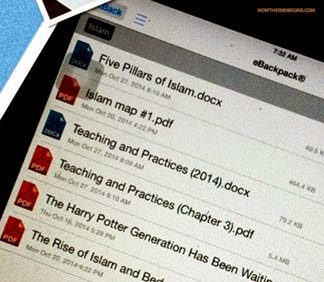 The curriculum teaches our kids that "Non-Muslims in conquerored territory are allowed religious freedom (for an additional tax)."  (Try telling that to the hundreds of thousands of people fleeing from the murderous rampage of ISIS in Iraq and Syria.) But our kids will only be taught that "Allah is the Almighty God…Allah alone is the Creator, He alone deserves our devout love and worship.”
Yes, I've been writing about the duplicitous intent of the Department of Education for over two years now.  There have been some victories for truth, and far too many defeats; and for the most part, I'm afraid that many parents may be unaware of what their children are being taught in the name of "advanced current thinking."
Now The End Begins website reports that "Children are being forced to say the shahada, and forced to learn the Five Pillars Of Islam."  If you are wondering, "Why should that concern me?" or think there is no problem with your child learning about other cultures, I would ask you to consider this:  NTEB's report also includes this bit of information ...  "When Muslims force Christians to convert, they are forced to say the shahada (the Muslim declaration of faith). The Arabic writing on the black flag of jihad (also known as the al Qaeda flag or ISIS flag) is the shahada. This chant of supremacism and imperialism is being forced on American school kids."  Does that make you sit up and take notice?  It should!
The article tells other stories ... about a mother helping her 7th grade daughter study her Social Studies homework, which consisted of vocabulary words like Qur’an, Mosque, Alms, Caliph, Jihad, Sunnis, Shiites.  Furthermore, she discovered that her daughter's assignments instructed her to "draw detailed pictures of the 5 pillars of Islam and write a word collage of all that is good with Islam."
Just imagine if a school's curriculum included lessons that asked students to study words like Jehovah, Tithing, Pentateuch or Communion; or if a student was told to memorize the 10 Commandments or write a short story about all that is good with Christianity.  You would have the ACLU, the Freedom From Religion Foundation, and every anti-Christian organization in the country filing suit!
The good news about this particular parent's experience is that she became active this year in getting appointed to a schoolbook review board at her daughter's school; educated herself on what the Constitution says about favoring a religion; and started uniting parents through social media, in a consolidated effort to make other parents aware.
She's not the only parent who is outraged over this reeducation of our school children.  You might have seen this story on The Kelly File on Fox News.  Marine and Iraq war veteran Kevin Woods was not happy that his 11th grade daughter was asked to write a paper on the 5 pillars of Islam, Mecca (the holiest place in Islam), and the prophet Mohammad.  He called the school and reportedly told them he disagreed with his daughter being taught these subjects.  His argument was based on our inability to mention God in the classroom, say the Pledge of Allegiance, and pray before a football game. 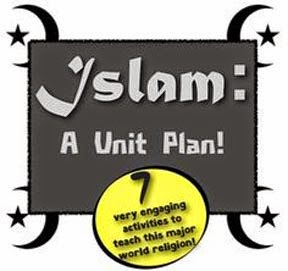 But school officials say they "are not teaching religion; they are teaching world history."  You can imagine after serving our country where Islam is the predominant religion, he just might have a difference of opinion.  And being a Marine, his language was probably pretty colorful.  That got him a no-trespass order from the local police, for being "threatening."  But he's standing by his convictions, and after the school refused to give his daughter an alternative lesson, she will be refusing to submit to the propaganda and will most likely receive an F for the class.
These stories are not out-of-the-ordinary.  What frustrates me, is this has been going on for at least two years, and is most likely deeply entrenched -- not only in your school system, but in your child's mind!  I cannot stress how this invasive curriculum is undermining our country ... it's not education; it's not world history; and it's certainly not teaching cultural diversity --- it's brainwashing and proselytizing!  And to be honest, it's being done throughout all grade levels.  It's not just your college kids you have to worry about being taught anti-American and anti-Christian doctrines.  Common Core has a curriculum for Kindergarten through 12th grade!  They are trying to change the basic belief systems of our kids!
As long as Common Core is a continuing threat to mislead our children and change what this country has stood for, I will continue to write about it to wake up as many parents as I can.  This tactic is not new and is actually prophesied by Jesus.  In Matthew 10, He tells us that children will rise up against their parents.  What better way for Evil to infiltrate a nation or a people, than to turn the hearts and minds of the children against all that their parents have taught them?  And think how easy it is to do, when the parents aren't even aware the campaign has begun?
I beg you, PLEASE take the time to do some research about what your children's curriculum includes.  Question them, look over their assignments and peruse their schoolbooks.  And be like these parents I've mentioned.  Speak up, and speak out!  Do not be silenced or threatened by School officials or School Boards.  There is an evil-intentioned agenda eating away at the center of our national identity, and it is stealthy and persistent.  The infection has begun, and unless we are vigilant and relentless in bringing it to light, it will succeed in poisoning us.  Time is running out!