It has certainly been interesting to watch uber-Liberal atheist Bill Maher and his atheist author buddy Sam Harris attempt to talk religion with Hollywood hothead Ben Affleck.  The subject was the Left's reaction to criticism of the violence committed by jihadists in the name of the Islamic religion.
First of all, I found it amusing that Maher declared that Liberals have a claim on "the freedom of speech; the freedom to practice any religion you want without fear of violence; the freedom to leave a religion; equality for women, minorities, and homosexuals" ---- these are principles he called "Liberal Principles".  (Why is it that Liberals are the only ones who believe in these principles?  Don't all people want freedom and equality?)
Sam Harris went on to say, "Liberals have failed on the topic of theocracy."  By this, I believe he is referring to a particular doctrine of a particular religion; in this case, Islam.  He goes on: "Liberals will criticize White theocracy and Christianity... they will become agitated about the abortion clinic bombing in 1984; but when you want to talk about treatment of homosexuals, women, and free-thinkers in the Muslim world, then you are called racist."  That automatically introduced the loathsome word (gasp!) ... Islamophobia! 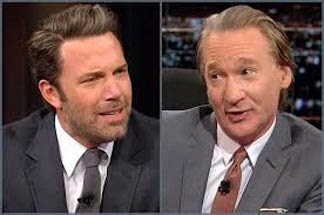 That's when Affleck could contain himself no longer.  He almost came flying out of his seat as he tried to equate that kind of logic with disparaging comments about Jews and Blacks.  His argument was that Maher and Harris were conflating Islam with Muslims; they were painting a broad brush of doctrinal belief across all Muslim cultures and peoples.  Who is right?  Or are they both correct?  The problem is you have men -- two who have publicly stated they have no love of religion or faith; and one who shows no evidence that he knows what faith is -- trying to defend a religion that our culture cannot understand or equate.  So that makes them authorities, right? (Wink, Wink).
From my decidedly (and unapologetically) Christian viewpoint, it looks to me that Mr. Affleck wants to argue this from a position of relativism.  In other words, I think he believes that no one can argue what Islam stands for, because Muslims are free to interpret Islam as they wish.  So those who interpret it violently are just "a few bad apples", so to speak.  And when you try to use "relativism" as an argument, you become less interested in defining the true nature of something, and no one is ever really to blame, are they?
As Raymond Ibrahim, an award-winning journalist and Middle East and Islam specialist, points out in an article on PJ Media, "The fundamental mistake in the position of [Islam apologists such as Ben Affleck] is that it places Muslims on a higher pedestal of authority than Islam itself (even though Muslims are by definition “one’s who submit” to Islam, which is “submission” to Allah’s laws).  Islam is based on the law, or Sharia — “the way” prescribed by Allah and his prophet.  And Sharia most certainly does call for any number of things — subjugation of women and religious minorities, war on “infidels” and the enslavement of their women and children, bans on free speech and apostasy — that even Affleck would normally condemn."
We, in the Western culture are simply unable to understand that this is not only a religious problem, but a cultural one.  Yes, not all Muslims are jihadists.  But, we must ask ourselves this:  "Are all Muslims Islamists?"  There are many that do not embrace violent jihad; they wish to work within the system, but if they are a true Islamist, then they still believe in the strict doctrine of Sharia Law, and that is where the danger lies.
It is the foundation of Sharia Law that the jihadists want to impose on the world.  I will agree that it is wrong to say that "all Muslims" want to execute you if you leave the faith, or stone homosexuals; but to me, the fact that one would say it is a problem!  And how do apologists square the fact that a growing number of Muslims are flocking to ISIS, who loudly proclaim their goal of Sharia Law for the world?  This is the same Sharia Law that advocates stoning homosexuals and adulterers, or executing you if you leave the faith, remember? I would expect Liberals,who espouse a person's freedom of choice, to recognize that characteristic of the Islamic faith.  To which, the standard reply from apologists like Affleck, is that we are racists. In our culture, whenever you want to shut down any argument or logic, you simply invoke the "race card", and you are discredited.  But here's the problem, Ben --- a Muslim is not a race of people, but a follower of the religion of Islam.
As Rich Lowry, of the National Review Online, wrote, all Bill Maher was trying to say "is that self-consciously tolerant liberals often look the other way when confronted with the intolerance of the Muslim world." But Ben Affleck just can't go there.  It feels too judgmental, and as any modern American Liberal must do, he cannot give any hint of American or Western "exceptionalism".
So how does he explain away that Christians in Syria and Iraq are given three choices by Muslim Islamic believers -- convert to Islam, become enslaved to the system, or death?  Or does he simply ignore the difference in the way Christians and Islamists pray about their enemies?  There is a huge difference between loving your enemy and praying for those who persecute you, and praying for your god to cut out the tongues of your enemy, freeze their blood and inflict pain and misery on them.
The sad truth of the controversial debate between these men is that they argued over the unfair criticism of Muslims and Islam, and found nothing good to say about our Christian Faith.  They are blind to the inherent sinful nature of all men, and that we are all in need of a Savior.  They just look down upon us misguided followers of Jesus, and refuse to look up for their redemption.  They're so smart, and compassionate, and they have no need of deliverance; they have all the answers.  Their arguments are just a symptom of the West's egocentricity and social relativism -- we are self-important, and there are no moral absolutes; our values and ways of interpreting the world can vary from society to society and even within different sections of societies.  So, how dare we question another person's actions, especially if they look different and act different than we do?
The bottom line is this:  These men, who have no faith of their own, are incapable of understanding an extreme faith; and are only capable of projecting their own moral relativism on another culture's actions.  In the end, their opinions don't really matter; they are just an actor and talking heads.  But sadly, we have politicians who are responsible for our national safety who have no more faith, and their moral view is just as cloudy.  God have mercy on us!

Isaiah 5:20   "Woe to those who call evil good and good evil, who put darkness for light and light for darkness, who put bitter for sweet and sweet for bitter!"