A Personal Look At Ebola

This week, Thomas Eric Duncan, of Liberia, died in Dallas of Ebola.  While there are many contradictory reports concerning the level of this nation's preparedness for dealing with this deadly disease, it is important to face this monster, as we have done in so many things in recent history.  We must not panic, and we must take as much responsibility as we can for ourselves; get the facts, increase our knowledge of the disease and how to protect ourselves and family, and put a plan in place.
But I think it is also important to take a good, close look at this disease and know what to expect.  There is no better person to help us do that, than Dr. Kent Brantly, who survived Ebola, after returning to the U.S. from West Africa, where he was treating patients, himself.  The fact that Dr. Brantly is a strong Christian helps me to confront my fears, as I hope it will you.  Here is his story, in his own words, as printed in a recent Time article:

Ebola is ravaging West Africa like a wildfire out of control.  The morning I woke up with Ebola, I felt a little warm. My temperature was 100.0–higher than normal, but not too concerning. I decided to stay home from work that morning just to play it safe. I had spent the last seven weeks fighting the world’s worst Ebola outbreak in Liberia, where I was working as a physician with Samaritan’s Purse. I thought I just had a cold, but I was not naive enough to think I was immune to the possibility of Ebola.
By noon, my temperature had increased to 101.4. I took a rapid malaria test; it was negative–not a good sign. I called our team leader, who sent physician colleagues to my home in full protective gear. After two more negative malaria tests, I knew I would be in isolation for at least three more days. Often the blood test for Ebola will remain negative for the first three days of illness, so we had to wait a few days for an accurate result. In the meantime, I grew sicker. My fever hit 104.9. I felt nauseated and began having diarrhea. Eventually the team started an IV in my arm and gave me fluids. We all hoped it could be dengue fever. 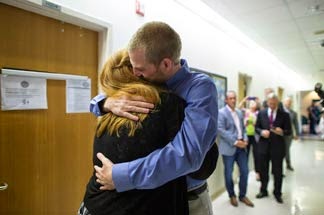 On the fourth day the team leader came to my bedroom window with news. “Kent, buddy, we have your test results. I am really sorry to tell you that it’s positive for Ebola.” I didn’t know what to think. I just asked, “So what’s our plan?”
In the middle of October 2013, I had moved to Monrovia with my wife Amber and two children. We planned to serve as medical missionaries with Samaritan’s Purse for two years. The first time I heard about the Ebola outbreak was at the end of March, at a picnic for expatriates living in the area. Someone asked if I had heard about the Ebola outbreak in Guinea. I had not, but within a couple of months I was one of only two doctors in Monrovia treating Ebola patients.
On June 11 our hospital, called ELWA (Eternal Love Winning Africa), received a call from the Ministry of Health. They were bringing two Ebola patients to our isolation unit. In the two hours it took for us to prepare everything, one of the patients died in the ambulance. Over the next month and a half the number of patients grew exponentially. We were overwhelmed.
On July 20, we opened a larger isolation unit and consolidated our smaller facility with the patients from another nearby hospital. That’s the same day I dropped off Amber and the kids at the airport to return to Texas for a family wedding. I was supposed to meet them a week later. But just three days after their departure, I got sick.
Even with the bad news, I felt calm. I never shed a tear when I called my wife and said, “Amber, my test is positive. I have Ebola.” Though the rest of my family wept, I felt strangely at peace. God blessed me with that peace that surpasses understanding. Since we had started treating patients with Ebola in Monrovia, we had only had one survivor. I had watched too many people die from this disease. Amber and I were both at the disadvantage of knowing how this illness ends.
At some point, I was told about an experimental drug. It had worked on monkeys, but had never been tested in humans. I agreed to receive it, but then decided that Nancy Writebol should get it first, since she was sicker. I was not trying to be a hero; I was making a rational decision as a doctor.
Over the next couple of days, though, my condition worsened. My body began shaking, my heart was racing. Nothing would bring down my temperature, and I had fluid in my lungs. I felt hot, nauseated, weak–everything was a blur. I had friends and colleagues praying outside my house–and all over the world. The doctor decided to give me the drug, and within an hour my body stabilized a bit. It was enough improvement for me to be safely evacuated to Emory University Hospital in Atlanta.
During my own care, I often thought about the patients I had treated. Ebola is a humiliating disease that strips you of your dignity. You are removed from family and put into isolation where you cannot even see the faces of those caring for you due to the protective suits–you can only see their eyes. You have uncontrollable diarrhea and it is embarrassing. You have to rely on others to clean you up. That is why we tried our best to treat patients like our own family. Through our protective gear we spoke to each patient, calling them by name and touching them. We wanted them to know they were valuable, that they were loved, and that we were there to serve them.
At Emory the doctors were able to see that my potassium level was low and replenish it–something that could not be done in Liberia and could have killed me. I finally cried for the first time when I saw my family members through a window and spoke to them over the intercom. I had not been sure I would ever see them again. When I finally recovered, the nurses excitedly helped me leave the isolation room, and I held my wife in my arms for the first time in a month.
Even when I was facing death, I remained full of faith. I did not want to be faithful to God all the way up to serving in Liberia for ten months, only to give up at the end because I was sick. Though we cannot return to Liberia right now, it is clear we have been given a new platform for helping the people of Liberia.
Ebola has changed everything in West Africa. We cannot sit back and say, “Oh, those poor people.” We must think outside the box and find ways to help. People are fearful of isolation units because “that is where you go to die.” They stay home instead and infect their families. Perhaps we need to find a way to provide safe home care that protects the caregivers. The national governments of West Africa are overwhelmed. They are not capable of handling this outbreak with simply a little help from some NGOs. This is a global problem and it requires the action of national governments around the world. We must take action to stop it–-now.

Dr. Brantly's honesty and faith in the face of death should inspire us all.  This disease robs us of our dignity, but we must not let it strip us of our humanity.  We must be compassionate towards those who are stricken, follow all safety precautions, and above all else, pray for God's deliverance from this pestilence.

2 Chronicles 20:9   "Should evil come upon us, the sword, or judgment, or pestilence, or famine, we will stand before this house and before You (for Your name is in this house) and cry to You in our distress, and You will hear and deliver us."