Is It The Military's Duty To Fight Ebola?

I can tell you that I am struggling to understand the decision to send our military personnel to West Africa to become involved in fighting Ebola.  In an exclusive report on WND.com, some of our most decorated and retired Military Generals are grappling with this decision, too.  Retired U.S. Army Lt. Gen. William “Jerry” Boykin and retired U.S. Army Maj. Gen. Paul E. Vallely both question the decision by Secretary of Defense Chuck Hagel to put 4,000 boots on the ground.
Although U.S. officials want us to believe that our troops' exposure to the deadly virus will be "limited", this seems to be a very rushed and anything but comprehensively planned mission.  We are told that "the soldiers would be responsible for command, control, logistics, civil affairs and medical assistance."  Should that really be their role?  Doesn't that sound like duties that should be carried out by the Center for Disease Control?
In fact, the CDC Foundation website describes the role of the CDC in case of a contagious outbreak as follows:  If a pandemic should occur, CDC would conduct an investigation and provide technical assistance to cities, states or international partners dealing with the outbreak. This assistance would include consultation, lab testing and analysis, patient management and care, tracking of contacts and infection control (including isolation and quarantine). CDC’s primary goals would be to determine the cause of the illness, the source of the infection/virus/toxin, learn how it is transmitted and how readily it is spread, how to break the cycle of transmission and prevent further cases and how patients can best be treated. Not only would scientists be working to identify the cause and cure of the outbreak, but CDC acting with other federal and international agencies would send medical teams and first responders to help those in affected areas. Scientists in the labs of CDC would work to develop a vaccine to combat the virus and then distribute and administer it to public.
So why aren't they doing their job and going to West Africa, instead of sending our troops to do jobs they aren't qualified for?  As General Boykin points out, "At a time when our military has been at war for 13 years, suicide is at an all-time high, [post-traumatic stress disorder] is out of control and families are being destroyed as a result of 13 years of war, the last thing the president should be doing is sending people into West Africa to fight Ebola ... That's not what the military does." 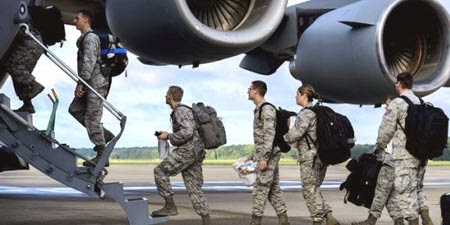 In the WND article, Boykin goes on to point out that there will be no inoculation for Ebola prior to troop deployment. Defense Department spokesman Rear Admiral John Kirby said that the only preparation service members will receive before heading to West Africa will be briefings on the disease.  How would you feel if your son, daughter, husband or wife was assigned this deployment?  Will that information help you sleep at night?
And as I look at these young people boarding a transport plane in the accompanying photo, I can't help but think, "What are we sending them into?  How will we protect them, and how will we contain this disease should, God forbid, one of them contract it?  Are they just a face without a name to the DC politicians?"
Then there is this to consider ... the CDC wanted us to believe that our nation's hospitals were briefed and prepared to deal with any potential Ebola patient that showed up on their doorstep.  Yet, it is clear to us all that the so-called medical experts botched it in Dallas.  Are we really expected to believe that  we can send 4,000 soldiers into the heart of the beast and no one will become infected?  And can they guarantee that all these heroes will be better monitored than one man was in Dallas -- so that they do not endanger their loved ones at home, or deploy to other units and spread the disease?
And like General Boykin, I want to know, "Where is the U.N. or other African nations?"  Why are our troops once again on the front lines?  You don't have to be a conspiracy nut to figure out that this doesn't make sense, and defies logic or common sense.  The administration spokesmen can insist all they want that our troops won't be exposed to the virus; but the fact that they are in West Africa places them in harm's way.
Then there is information provided in another WND article, written by Joseph Farah.  He reports that "The Defense Department is planning to spend at least $1 billion on the effort. That represents a commitment of $333,333 for every soldier deployed. Just imagine how many more local citizens could be hired for this assignment?"
Farah's article also mentions the ambiguity of Defense Department spokesman John Kirby, when he said, “But there’s no – there’s no intent right now for them to have direct contact with patients.”  Do you trust the safety of our troops after that ill-defined statement?  And here's what I don't get ... Kirby very clearly states that this "is not a military operation ... The mission is to do some training, to build these units and do some logistics, some transports, the movement of materiel."  So, if it's not a military operation, why are we sending soldiers?
You know, it seems to me that we actually have some real missions that better suit our soldiers right now ... like stopping the growing threat of Islamic radicals in Syria and Iraq... or how about protecting our own country from a myriad of threats at our southern border?  That's what our troops are trained to do!  They are warriors, trained to fight and win wars ... this is one mission they should not be called to answer.

Psalm 91:9-10   "Because you’ve made the Lord my refuge, the Most High, your place of residence—no evil will happen to you; no disease will come close to your tent."