WARNING: "Wearable Technology" Is 1 Step Away From Occupying You!

Well, Apple has done it again ... the opening weekend sales of its newest iPhone 6 model topped 10,000,000 units.  People who cannot wait to become more integrated with the latest "smart device", swamped the tech giant with online sales; some even slept on the cold, hard ground in front of Apple stores to be the first in line.
Me, I have never been one to jump into a trend because it's "the latest and greatest".  Perhaps it's the nonconformist in me, or that I simply detest the marketing scheme that makes your latest expensive purchase obsolete within months of its acquisition.  In fact, you can call me old-fashioned and out-of-touch, but I actually loathe the intrusion in my life that the cell phone represents.  I am not one of those zombies that you see with a cell phone in their hand 24/7.  I have opted for the least expensive and less invasive model I can find.  I don't update the Google maps application, or the GPS, or any of the social media apps that constantly try to upload to my phone.  I don't need to be that "connected", and I can gain access to that information whenever I decide.  (However, I am not naive enough to think I can avoid detection from the information-seekers). 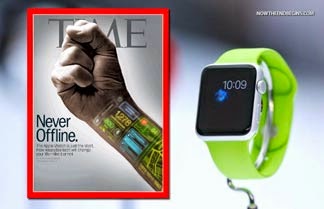 But enough of my personal rant, I really want to make you aware that with each new "innovation" of your can't-do-without mobile device, technology is taking you one step closer to truly "becoming one" with it.  Let me explain ...
The NowTheEndBegins (NTEB) website ran a series of articles on our culture's rapid descent into "wearable technology."  The site points out that it has been a mere 20 years since the personal computer came on the scene, and the three-fold sales pitch of this new technology is in full swing.  STEP ONE:  Get computers in front of us and create an addiction for them; an "I can't live without them" mentality.  We've gone from clunky desk models to laptops to iPads and iPhones... Mission Accomplished.
STEP TWO:  Shift the location of computers from being in front of us to being on us.... "wearable technology".  With the advent of Apple Watch (coming to a location near you in early 2015), you will never need to be away from your "smart device".  You can wear it as a watch or a nano-shirt; it will be an experience that "blurs the boundaries between the physical object and the software that powers it" --- those are Apple's words, not mine.  Mission On Target.
STEP THREE:  That takes us to the next and final step; the last boundary to be crossed ... "Smart" technology that will live inside us.   NTEB points out, "Your pulse and venous system will act as the active recharging elements, and all functions now carried out with mouse and keyboard will be done via eye motions and voice commands."  Ultimate Goal of the Mission.  Does that creep you out like it does me?
As the site points out, this kind of device, as in the Apple Watch, is a paradox ... it will give you control by letting you know not only what time it is, but when the inevitable apps begin surfacing, you will be able to tell how many miles you walked that day, how many calories you absorbed, and your heart rate during exercise.  But here's the conundrum ... you will also have to give up some personal control.
These same amazing apps will be designed so that your phone will "start telling you what you should and shouldn’t eat and how far you should run...  Wearables will make your physical self visible to the virtual world in the form of information, an indelible digital body-print, and that information is going to behave like any other information behaves these days. It will be copied and circulated. It will go places you don’t expect. People will use that information to track you and market to you. It will be bought and sold."
As NTEB notes, with this new technology development, we will have changed the dynamics of the human-computer interface.  Our physical bodies will no longer be in a separate place from our computers; that line is being erased.
In reality, that line has already been crossed with the news that Ben Slater, of Brisbane, Australia had a microchip implanted under his skin so he can control electronic devices with just a wave of his hand.  As the NTEB site disclosed, "He hopes the new generation of Apple’s smart phone will have the capability to read the microchip implanted in the webbing between his thumb and forefinger."  This is just the inescapable evolution of technology ... in 2004, the U.S. Food and Drug Administration gave the green light for its use to carry information about people’s medical conditions.  Why are we surprised that it is being interfaced with smart technology? 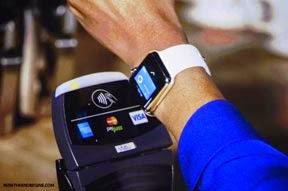 Apple Pay is just one of the new apps that will be available on the iPhone 6.  Here is Apple's marketing ploy:  Apple Pay will change how you pay with breakthrough contactless payment technology and unique security features built right into the devices you have with you each day.  So you can use your iPhone 6 or Apple Watch to pay in an easy, secure, and private way.  This technology is called "Touch ID" and registers your unique fingerprint with your credit card information.  Whether you use this app on your iPhone or your Apple Watch, you receive a gentle vibration against your skin and a beep to let you know your payment was received.
But how long will our dependent culture be satisfied with this?  How long before they are clamoring for an even easier application?  I can hear it now ... "I don't want to be bothered with carrying a device ... just chip me and let me handle my payment transactions with a show of my hand."  Hmmm, where have I heard that before?

Revelation 13:16-17    “And he causeth all, both small and great, rich and poor, free and bond, to receive a mark in their right hand, or in their foreheads: And that no man might buy or sell, save he that had the mark, or the name of the beast, or the number of his name.”
Posted by Pam Kohler at 7:00 AM

Email ThisBlogThis!Share to TwitterShare to FacebookShare to Pinterest
Labels: Our Culture., Technology