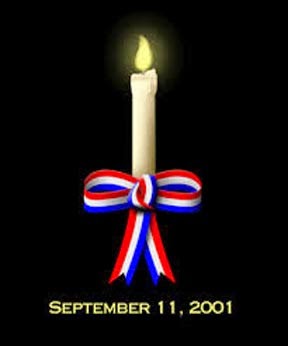 For some reason, this anniversary of 9-11 finds me being more cautious and alert.  Is it that overt threats against our homeland have been made by an Islamic terrorist army that makes Osama bin Laden look like Mr. Rogers?  Is it the missing Libyan jetliners?  Is it that there are credible reports that terrorists from the Middle East and Africa have easily entered the country through the porous southern border?  Or is it that I'm just more "edgy" because the enemy is no longer keeping its plans to attack us under wraps, but boldly proclaiming it from every online social networking service available?
How about "all of the above"?  Plus, there is the book by the security contractors in Benghazi, who write they were told to "stand down" from rescuing their teammates.  How does that appear to those who wish to destroy us?  All these scenarios point to the likelihood that we are seen as a viable target.  These are the "facts on the ground", so to speak; what I can point to in support of my clear, sound reasoning.
But then there is what my spirit senses.  There's no physical proof, no material witness, no concrete evidence.  I am simply unsettled in my soul, and aware that danger is in the air.  I also know that this particular day has become a symbol of victory over us, and the September 11th, 2012 attacks on the compound of the American consulate in Benghazi have emboldened our enemies.  And that enemy has coalesced into a murderous, barbarous horde that my spirit recognizes as pure Evil.  It is more than a religious ideology gone bad; it is dark, fiendish and diabolical.
What's more, we are not the same country we were on September 11, 2001.  I'm sorry to say, but I think we are weaker, less secure, and less determined to defend our might as we were on that fall morning, thirteen years ago today.  Our military is exhausted and stretched too thin as they fight multiple battles on foreign fronts.   Add that to the lack of defense on our borders, and the growing division among the American people on issues such as immigration, racism, and social/moral values, and we are a country disunited and vulnerable.  In short, we are weary of our struggles, and perhaps have even become anesthetized; worn down to a state of desensitization.
Also, our Western culture is practically incapable of sustaining a long-term state of readiness.  We are ingrained with a desire and demand for instant gratification ... we pay attention to the news for a period of time; gather our buckets of rice and beans; take a few self-defense classes; buy some ammo and extra food and supplies .... and go back to sleep.   "There, I've taken care of my emergency essentials; I'm prepared," we tell ourselves.  "Now, I want to go back to my fun, and my sports, and planning my next vacation."
But our enemy doesn't think that way.  They've succeeded in attacking us on September 11th -- not once, but twice in the last thirteen years.  And each time they're thinking "bigger and better."  Not only that, but they have the patience to wait until the time is right and they can execute their plan, just the way they want it.  They don't get weary and they don't go back to sleep.
But, this is the important factor that Americans don't understand --- September 11th is more than just the day planes flew into the World Trade Towers, or the day that America was attacked on foreign soil.  Radical Muslims look upon the attacks in 2001 as it pertains to their history over the last 330 years or so.  September 11th is a significant date to them because it represents the beginning of the defeat of the Turkish Ottoman Empire, (the last great Caliphate), at the battle of Vienna on September 11, 1683.  It represents the beginning of the decline of their Islamic culture and the rise of the Western culture.  Therefore, to the radical jihadists, September 11th has become symbolic of reversing that trend and re-establishing the superiority of Islam.  It only makes sense that with the rise of ISIS, and a new Caliphate, that they want to be able to create a new September 11th to celebrate victory, rather than the bitter taste of a centuries-old defeat.  They are on a roll right now, and this is why I am praying that with God's help, this day will be uneventful.
And if He decides to bless us and protect us, my prayer is also that we would awaken to the growing peril that we face.  We cannot win this battle alone; we must ask God to go before us and protect our individual lives, our nation, and our way of life.  Keep on your knees, people!  And may there be a hedge of protection around you and your family today.

Deuteronomy 31:8      "The LORD himself goes before you and will be with you; he will never leave you nor forsake you. Do not be afraid; do not be discouraged."