The Southern Border: What You're Not Hearing

This post comes to you courtesy of an organization called Oath Keepers.  I cannot imagine that you are unaware of them, but if so, here is their mission statement:  Oath Keepers is a non-partisan association of current and formerly serving military, police, and first responders  who pledge to fulfill the oath all military and police take to “defend the Constitution against all enemies, foreign and domestic.”  Furthermore, Oath Keepers reaches out to both current and veteran military personnel, to remind them of their oaths, to teach them more about the Constitution they swore to defend, and to inspire them to defend it.  Their motto is "Not on our watch!"
They go even further on their website in describing their loyalty to Article VI of the Constitution, rather than to politicians, but I will let you do your own research on what that may entail.  Today, I want to make you aware of what they are doing to help defend our Southern border.
Under an article, titled Texas Ranchers Fear For Their Lives And Families -- Ask Veterans For Help, we get an up-close and personal view of just how bad it is on the Texas border.  Never mind what you hear the talking heads or the White House Press Corps say ... listen to the first-hand account of someone who is living the reality:  Rusty is a lifelong rancher along the border of Texas and Mexico.  He describes how the Mexican drug cartels are using death threats, assault, and attempted murder to drive ranchers and their families off of their land. He tells how some of his neighbors are fleeing their ranches, while others are standing firm with the help of volunteer patriot security patrols. 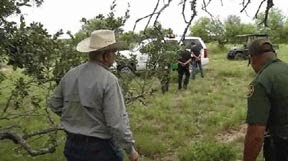 In an audio interview on the Oath Keepers website, Rusty describes the Border Patrol intercepting Muslim men from Somalia, Iran, Iraq, Syria, and says “when they [Border Patrol] take them in, they’ll disappear – they’ll take them somewhere – and even the records will disappear. And I asked one of them ‘what’s the deal on the records’ and he said ‘that’s an order from way up the line, up in DC – they don’t want anybody to know how many are coming through’…they [the local Border Patrol agents] keep records but the records disappear, out of the mainframe – out of the computer – and the paper records too.”
Rob, an out-of-state Oath Keepers member who has been serving as a volunteer guard on Rusty’s ranch corroborates Rusty's narrative, and adds his own opinion:  "The only thing we [the American public] hear about is women and kids… and when they make huge drug busts, that’s what we hear about.  We don’t hear about the gang-bangers coming across, we don’t hear about the terrorists coming across.  We don’t hear about the violence going down on the border.  I had a rancher call me last week, and begging for help on 15,000 acres.  He had been moved off his ranch because he doesn’t feel safe with his family there.  He’s been shot at and threatened.  We don’t hear that [on the news]."
Perhaps the most frightening information coming from this interview was Rusty's account of the child abductions, sex-slave, and prostitution threats:  "They steal kids. Literally, they steal kids. Depending on how good looking they are, they’re gonna start at $35,00.00 to $45,000.00 dollars per kid. Blond haired, blue eyed little boy, little girl, is anywhere from $50,000 to $75,000.00 dollars, depending on how old they are. The older they are, particularly for girls, the more the price goes up. There’s been some girls that have been missing here, for five years from Brownsville, they were stolen when they were thirteen. One of them was found in a whorehouse in Mexico City. Her parents bought her out [from the cartels]– they bought her out for a million-five."
Apparently Governor Rick Perry's call-up of the Texas National Guard is having little effect.  According to Rusty, "The Texas State Guard are in the flimsy, cheap, probably Chinese-made watch-towers.  They’re not bullet proof, they’ve got glass on four sides and they posted them from McAllen, which is the North end of the Valley, to Laredo, which is about 200 miles.  They’re not down here south."  And Rob is saying that the BLM land, owned by the Government, is a very large, wide open “free pass” zone for the cartels, terrorists, and gangs coming across the border.  "Border Patrol is not even allowed to chase people on it... There’s a joke in the community here that the only people allowed on Fish and Wildlife land are the illegal immigrants."
And now these brave Texas ranchers (and Americans!) are left to their last resort ... asking Texas veterans to live up to their Constitutional oaths and come help defend the border.  That is a poor reflection upon this nation's sovereignty ... oh, but I forgot ... we are no longer sovereign or independent. There is an agenda here and it's not a pretty one.  Rusty's story makes it very clear that Americans and their lives, liberty, property, and pursuit of happiness are sacrifices worthy to achieve an ill-gotten goal.  May God protect these families and those who come to their aid!

Nehemiah 4:14     And I looked and arose and said to the nobles and to the officials and to the rest of the people, “Do not be afraid of them. Remember the Lord, who is great and awesome, and fight for your brothers, your sons, your daughters, your wives, and your homes.”
Posted by Pam Kohler at 7:00 AM