I will readily admit that I am not a lover of social media.  Facebook, and the like, are a convenient way to stay in touch with loved ones who live far away, but I'm just not one of those people who are obsessed with knowing every routine event in everyone's lives.  Nor do I think that anyone is really interested in my ordinary life.
That being said, social media can be an interesting way to determine what is driving our culture, and in what direction our younger generations are moving.  There was an interesting article in National Review Online this week that proves that very point.  The title of the article was "Anti-Feminists Baffle Feminists" and it appears that there is a quite vocal group of young women who have started a hashtag campaign on social media called "Women Against Feminism". 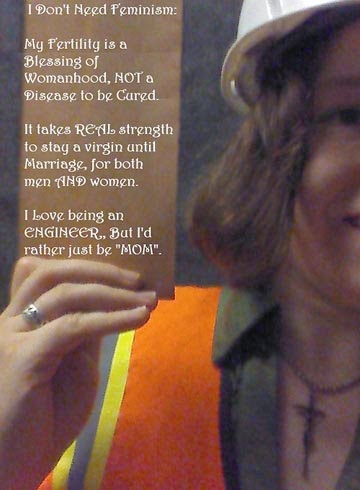 The Tumblr site features pictures of women holding up handmade signs explaining why they do not adhere to the extreme versions of feminism that would label them "victims" of a patriarchal society.   From what I can gather, these young women take offense at the position that being called "pretty" by a man, or having the door opened for them, or even (gasp!) choosing to stay home and raise a family instead of pursuing a career, somehow makes them the weaker sex.  They seem to reject the hard-core feminist ideology that centers around gender bias.  In fact, these "women against feminism" celebrate the differences between men and women ... they don't want to be equal in everything!
I suppose that I can understand that the Gloria Steinem's of the feminist world would feel as if this generation was taking a step backwards.  After all, it was their life's work to convince us women of the 70's and 80's that we were miserable in this "man's world".  But I actually applaud these young women who don't want to be viewed as man-haters, or as angry, militant, and grieved parties.  They love men and believe in the intrinsic value that each gender brings to society.  That's the way God made us!
And it's nice to see all types of young women recognizing the contributions that both men and women bring to our lives.  Some of the home-made signs read thusly:  "I don't need feminism because I'm proof that I can have a successful career and be a loving, supporting wife and mother.  I love to be in the kitchen!"  "I reject feminism because being a wife and mother is the greatest source of joy in my life.  I love and respect men and their priceless contribution to civilization.  Feminism emanates contempt for honor, grace, class, maturity, respect, and responsibility.  I am not a victim."  "I don't need feminism because I want my boys to grow up knowing what TRUE equality is."  "I don't need feminism because I like to be treated like a lady by a gentleman." 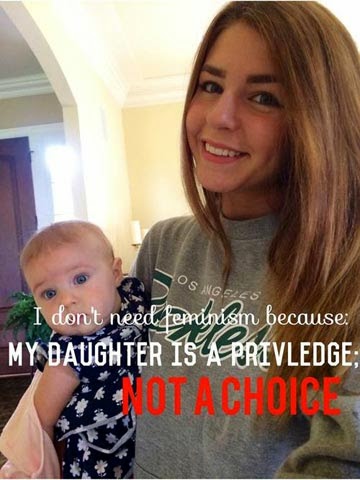 I can almost guarantee you that the radical feminists are tearing their hair out.  But I have had my own suspicions throughout the years that the agenda of this radical feminism was to destroy (or at least re-define) the idea of family.  I can still recall the feminist mantra of my college years:  "A woman needs a man like a fish needs a bicycle" (coined by Gloria Steinem).  These women urged us to make our careers more important than getting married or raising a family.  And if you were a home-maker, then you were a traitor and an embarrassment to your gender.
I, on the other hand, have long believed in, and advocated, the Biblical model of family.  I like feeling protected by my husband; and as a child, I loved spending all my early years with my mom, learning to cook and to care for a home.  Most of all, I loved that she was waiting at the door when I got home from school.  I realize that our current economy makes it difficult for families to exist on just one salary, but I know of many young families that are making the sacrifice to put their families first.  And I am not indicting those women who work outside the home, because I am also encouraged by the number of marriages of friends where they work together to provide a strong and stable foundation for their children to grow and thrive.
I want to stress that these modern young women do not see themselves as second-class partners in their marriages or homes.  I think that they fundamentally perceive that each gender brings something unique and valuable to the relationship; that there is no need for a "gender struggle" to feel validated.  Each and every person -- whether man or woman -- has the right to feel recognized and accepted.  There is no need to be "labeled", and no need to promote one gender over the other.  They already see themselves as smart, talented, and ambitious women.  So while this attitude may be a direct benefit from the Feminist movement in the 70's and 80's, they no longer need to distinguish themselves from the male population.  Perhaps it could be said that they accept the root concept of feminism; they just reject the word.  I salute their confidence and their way of thinking!

Ephesians 5:33     "However, let each one of you love his wife as himself, and let the wife see that she respects her husband."

Email ThisBlogThis!Share to TwitterShare to FacebookShare to Pinterest
Labels: Family