Controversy and The Church

This may sound like a rather curious title for today's post, but when I look at the state of the world; how far we, as a people, have strayed from Christ's teachings; and how little the American Church says to address the relevant issues ... well, the two concepts aren't so incompatible.
If you are reading my blog for the first time, it is important that you know that I view the world through a Biblical lens.  That means that everything that is in the headlines of the day -- around the entire globe -- I see in terms of God's redemptive plan for all of mankind.  If you are not a Believer, that doesn't necessarily mean that we will disagree on matters.  We all live in the world, and events ultimately affect and influence us all.  Take the war between Israel and Hamas, for instance.
You may see the conflict from a strictly political or moral standpoint.  You don't have to believe, as I do, that Israel's existence is part of God's Divine Plan to reconcile His chosen people to Him; or that no amount of Evil that comes against the Holy Land will ever be able to defeat it.  You may agree with me from a moral position, and simply see and detest the use of innocent civilians as propaganda pawns in a war of ideologies.  If you see Israel as the aggressors and "the bad guys", we will just have to agree to disagree.  I just can't get there, but I am willing to grant you your opinion.  Can you do the same for me?
Everyone has the right to their own opinion on any issue; whether it be same-sex marriage, our immigration crisis, abortion, sex trafficking, government corruption, or any of our Constitutional rights.  And we can certainly dialogue on any topic from a strictly secular standard.  But because I believe that God is sovereign over His creation, it is difficult to for me to leave Him out of the conversation.  Hence, I find myself wondering Why don't I hear the Church on these subjects? 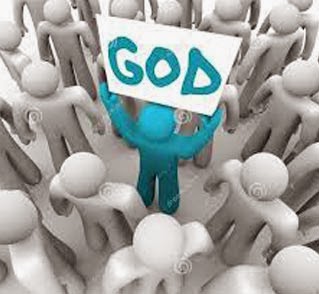 The first argument I'm likely to hear is the commonly used "Separation of Church and State."   It is my understanding, after studying the historical implications of this phraseology, that it was intended to mean that a "wall of separation" should be erected between the Church/Religion and the nation State in order to protect Religion from coercion, threats, harassment, or intimidation by Government forces.  (I use the word phraseology, because there is nothing in our Constitution that mandates the "separation" as it is accepted today).  As you can see, the exact opposite has occurred from the original intention.  Today, the Church is kept silent from fear of harassment by the ACLU or the IRS, through the cleverly implemented 50l(c)3 statutes.
In fact, a Christian website, One News Now, reports that The Barna Group, a leading research organization focused on the intersection of faith and culture, recently conducted an interesting survey among our nation's pastors.  When asked if the Bible speaks to the issues of our day, an astonishing 90% of pastors agreed with that evaluation.  But when asked how many of them preached sermons on what the Bible has to say about these same issues, only 10% said they did.  It seems that they shy away from anything "controversial".
Those numbers intrigue me.  What do these pastors say to themselves when they are preparing a sermon for their flocks?  Do they ask, "Am I performing my duties as directed by Jesus and the Bible?"  Or do they say to themselves, "What can I talk about that will make our Church a success?'  Because I think if you want to know where a pastor's heart is, just ask him, "How do you know if you're being successful in your church and your calling?"
According to the Barna Group survey, there were five answers that most pastors gave to that question .... "Attendance, giving, number of programs, number of staff, and square footage."  Do you find that anywhere in the Bible?  Have they forgotten that they are shepherds of Jesus's Church?  The Church is not their own private sphere of operation and control!  The truth is, it doesn't belong to them!  They are to lead and guide and instruct those whom Jesus has left in their care.  They are custodians of His Church!
Paul lays out their responsibilities very clearly in Titus 1:  "He must hold fast to the sure and trustworthy Word of God as he was taught it, so that he may be able both to give stimulating instruction and encouragement in sound (wholesome) doctrine and to refute and convict those who contradict and oppose it [showing the wayward their error]."  Instead, today I see far too many pastors straying from that trustworthy Word and refusing to refute and challenge what the culture says takes precedence.  They would rather placate the culture, than provoke it through Godly teaching.
Have they forgotten their primary assignment, The Great Commission?  They are responsible before Christ to lead their flock so that we may all effectively preach the Gospel; that we might know what our Bible says on any given subject and be able to share that instruction with others.  How many preachers encourage deep-rooted knowledge of the Bible?  Instead, we are encouraged to accept one man's message and are no longer urged to increase our own understanding.
Pastors are also to guard and protect their flocks from deception; to speak out when false teachings threaten to undermine the inerrancy of the Word.  Instead, I see too many church leaders accepting "new paradigms" and flawed interpretations in order to widen the boundaries of their acceptance.
Finally, I want to express my heartfelt desire to see Pastors and Ministers fulfill their important callings in our society.  I want to see them boldly proclaim God's Word as it pertains to current events; to refute the culture when it flies in the face of His commands; and to encourage the faithful to know and study God's Word.  If you are lucky enough to have a pastor that fits that description, then do all you can to support him.
To the world, this may sound like I am a religious fanatic, but I promise you that I look and sound and feel just like every other human being on the earth.  But I have had an encounter with the Creator of the Universe, and things have never been the same.  For me, what goes on in the world cannot be separated from the Biblical account.  Therefore, I am disheartened at the tepid -- and all-too-often inaccurate -- message of the Church to those who "perish for lack of knowledge."  After all, if the Church's message doesn't seem controversial to the secular and worldly masses, then it probably isn't walking in the footsteps of Jesus.  Now is the time to be bold!

Acts 20:28   "Pay careful attention to yourselves and to all the flock, in which the Holy Spirit has made you overseers, to care for the church of God, which he obtained with his own blood."