The ongoing battle between Congress and the President over the $3.7 billion in supplemental budget appropriations for the border crisis (the so-called "Border Bill") has taken on an ironic quality in the last few days.  At the end of last week, President Obama hinted that he was getting frustrated at the lack of action by Congress, stating, "I'm going to have to act alone; we've run out of money..."
Excuse me, Sir, but can you answer a simple question for me?  If we have run out of money, can you explain the elaborate detention center for immigrant women and children, located in Karnes City, Texas?  As reported by KXAN-TV, out of San Antonio, this 29-acre facility that used to house illegal male immigrants that were caught and detained by U.S. Immigration and Customs Enforcement (ICE) has now received an expensive makeover for its new purpose. 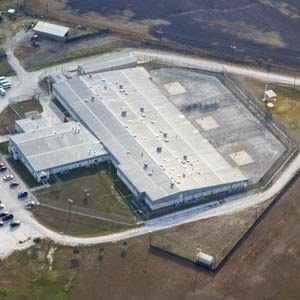 ICE field officers gave a tour to media representatives and proudly showed off the new detention center: “I am pretty sure you will agree this is nothing like we have seen before.”  I should say!  The media were shown newly painted rooms that catered to children, with cartoon characters painted on the walls, and all kinds of games to entertain them.  KXAN also reported that "Other amenities include recreational fields, a library, internet access, and a cafeteria which will serve three all-you-can-eat meals a day. Certified teachers will also be on site to provide year-round education and small jobs will also be available paying $3 a day for four hours of work."
But that's not all!  Cable television is available, along with recreation activities that include exercise equipment, a soccer field, basketball court, and volleyball court.  A computer lab allows some internet access and email services but restricts social media.  (Why stop there?  If the American tax-payer is footing this bill, why not go all the way?)
And it is not just free housing and upscale amenities that these illegal immigrants will receive. Pro bono immigration attorney services will be available on-site for those seeking asylum , and they will have an opportunity to see an immigration judge.  Apparently the immigration system does not guarantee the right to free and legal counsel, so attorneys are being solicited to " to see that the rights of the children are not violated.".  Please correct me, if I am wrong, but aren't these "rights" that pertain to legal citizens?   I am all for treating these unfortunate women and children with compassion and human kindness, but to infer legal "rights" on them because of an emotional response is not only un-Constitutional, but will completely bankrupt this country.
Oh, I forgot to mention that the "Detention Center" will now be referred to as a "Resident Center"; Detainees are known as Residents, and Guards are called Resident Advisors.  It is hard to understand this kind of "soft-sell" mentality, when city governments in Florida and California are passing ordinances that would make being "homelessness" a crime.  SHTFPlan reports that a whistleblower within the Los Angeles Department of Health Services has blown the lid off a plan "to round up and forcibly house homeless citizens in detention facilities", which the Department prefers to call "Low-cost housing facilities".  Will these "residents" receive cable TV and all-you-can-eat meals, plus free attorney privileges?  Somehow, I doubt it! So back to my original question ... How can we be "out of money", yet be spending the crazy amounts of money necessary to completely overhaul a 29-acre facility that will ultimately house over 530 well-cared for illegal immigrants?  And I would be willing to bet that it is not the only facility of this nature and quality that will be available to illegal "residents".
There are those who will tell me that the Bible says we are not to "oppress the sojourner or the poor".  Yes, it does.  But one must admit that it is not often easy to apply Scripture to a specific public policy issue, such as the humanitarian crisis we are currently faced with.  First of all, the correct Hebrew understanding of "sojourn" is a temporary stay.  That being said, the Israelites were to welcome such "sojourners".  But there are passages in the Old Testament (Deuteronomy 16, for instance) that make it clear that foreign residents were to comply with Israelite laws, such as Sabbath observance, etc.
But I digress ... perhaps I will undertake a separate post on the Biblical perspective of our immigration policy another day.  For now, I am simply trying to understand where the money is coming from to build these upscale detention centers.  Are they for "temporary stays"?  Or is this simply the first stop towards full-blown amnesty?  And what is the $3.7 billion appropriation destined for?  To beef up border security .... or to build more extravagant housing for non-citizens?  As a Christian, I know that the truly unfortunate should be cared for, but the duplicity that has led to this crisis does not generate an easy answer.  When you factor in the unknown number of those crossing the border who wish to do us harm WITH the unknown cost of feeding, housing, educating, and providing health care for hundreds of thousands, then it is mind-boggling.  Count it all as one more distraction by the Enemy to keep our focus off preparing for the return of Yeshua.  We must look upon Him for our deliverance from this out-of-control world.

Ephesians 4:31-32   "Let all bitterness and wrath and anger and clamor and slander be put away from you, along with all malice. Be kind to one another, tenderhearted, forgiving one another, as God in Christ forgave you."