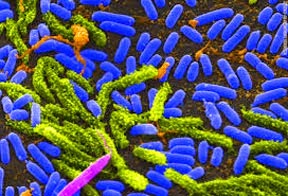 Ebola has captured the attention of the world and is producing fear throughout the populations.  But there is another threat waiting in the wings, and it is beginning its offensive ... Cholera.  You have to search for any news or reports on this new peril, but both Reuters and IRIN (Integrated Regional Information Networks) are sounding the alarm.
IRIN is a humanitarian news and analysis service, under the auspices of the UN, that covers parts of the world often under-reported, misunderstood or ignored.  According to this source, there has been "a cholera outbreak in northern Cameroon which has killed at least 75 people and infected some 1,400 others since April."  The disease has been a recurrent problem in the country due to the scarcity of water, poor public health care, and improper hygiene.
This threat is also exasperated by Nigerian refugees who have flooded neighboring Cameroon in an effort to escape the bombings and attacks by Nigeria’s Boko Haram Islamic extremist militia.  According to local health authorities, more than 26,000 cholera cases have been reported in Nigeria since the start of the year, and now it threatens to extend to western parts of Central Africa.
A UNICEF representative in Cameroon reports, “We are monitoring the situation. It’s a worry because there is a risk of regionalization towards Chad, Central African Republic if we do not curb the spread. We hope that the security situation will allow community mobilization to go on.”  But the shortage of health care workers could hinder the containment of the disease, and preventing cross-border infections is a high priority.
Reuters reports that the mortality rate for those infected ranges between 1 and 50 %, depending on access to treatment.  A similar outbreak in Cameroon killed more than 4000 people in 2011/12.  The United Nations refugee agency (UNHCR) said some 60,000 refugees have fled into Cameroon, Niger and Chad from northern Nigeria.  Some of them are carrying the disease. 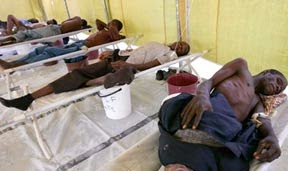 To be sure, it is a complex situation in Africa.  Between the poor health practices, too few health workers, and refugees from Nigeria's militant Boko Haram, Cameroon is fighting an uphill battle.  Add the fact that Nigeria recently reported its first Ebola claims, and you can see a crisis in-the-making.
But West Africa is not the only hot-spot for Cholera.  Ho Chi Minh City in Vietnam is also under threat of a cholera outbreak.  The Thanh Nien Daily News reports that contaminated surface water in the form of fecal bacteria is 10 times higher than safe levels.  The Minister of Health warns, “Cholera [can] quickly explode into a major outbreak. In the long term, it can spread and develop new and more fatal strains. I suggest that we take determined action for the safety of a city of more than eight million people."  Just imagine, in a city of that size, what the fatality numbers could be if this disease is not contained.
So now we have two potential epidemics on the horizon.  Many in the 21st century have probably thought we were immune to the devastating consequences of history's major plagues.  But there have been seven cholera pandemics in the past 200 years, with the seventh pandemic originating in Indonesia in 1961.  Since the 19th century, there have been tens of millions of deaths due to cholera.
Clean and sanitary water supplies are necessary to stop the spread of Cholera and oral rehydration with electrolytes is essential for recovery.  Similarly, balancing fluids and electrolytes to counter dehydration is also crucial in treating Ebola.  But now we see the world suffering from extreme drought and the availability of a dependable water supply is becoming more scarce.  So will vaccines become the "go to" solution?  Or is this just a convenient "method" of the Elite to control the world's population?
I hate to sound so pessimistic and conspiratorial, but modern scientists would have us believe that there is nothing that man cannot conquer through the god of science; yet we have a disease (Ebola) that they admit they cannot conquer, and there is no known cure.  When Jesus tells us in Luke that there will be "upon the earth, distress of nations, and perplexity", He is telling us that in the End Times there will be no solutions for such things as wars, famine and pestilence.  Man will fail in his dominion over the earth ... and boy, have we!  We do not have the remedy ... He does!
I do not know if these outbreaks of deadly diseases and viruses will be a tool in the hand of Satan, but I do know this --- I can only rely and trust on the saving grace of God; on the gift of salvation and eternal life through my faith in His Son.   Should these things come to pass, I will be looking up, for my redemption is close at hand.  We must help others to realize that the time is near.

Psalm 91:1-3     "He who dwells in the shelter of the Most High will abide in the shadow of the Almighty . . .  For he will deliver you from the snare of the fowler and from the deadly pestilence."
Posted by Pam Kohler at 7:00 AM