God and His Miracles

No matter which side you align yourself with in the Israeli-Palestinian war, you cannot deny that miracles are happening in the Holy Land.  The nation of Israel is no stranger to the protective hand of God.  History has never seen a nation completely annihilated, with its people scattered across the globe, only to be re-gathered to their native homeland and re-built as a nation -- 2,000 years later!  That is a miracle in itself. 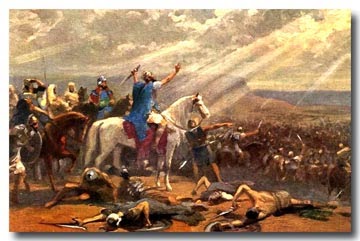 Throughout their ancient history, one can read Biblical accounts of God intervening in the Israelite's military battles, and bringing about miraculous victories.  Such is the case in "Joshua's Long Day" when his God made the sun stand still, and [He] caused panic among Israel's enemies the Amorites (modern day Syria), so that they slew themselves; and when God sent huge hailstones from heaven to kill them as they fled the battlefield.  Scripture is full of chronicles of God carrying the banner before Israel as they go into battle.
But the miracles haven't been limited to ancient legends.  From the time that Israel was declared a state on May 1, 1948, the tiny nation has experienced enough miracles to convince the world they are meant to be.  The following miracles are part of an interesting account presented by Bible411.com:
•   From the moment the modern state of Israel existed, her enemies have been determined.  The armies of seven Arab nations marched on the newborn State, boasting that they would "push the Jews into the sea." Outnumbered 100 to 1, Israel not only repelled the invaders but acquired more of Palestine than was granted in the UN partition plan.
•  When a Syrian column of 200 armored vehicles—including 45 tanks -- attacked Degania, the oldest kibbutz in Israel, they had no idea that the only heavy weapons in all of Israel were four howitzers of the type used by the French army in the Franco-Prussian War of 1870.  Two of these ancient weapons were dismantled and rushed to Degania, where local military commander Moshe Dayan struck a direct hit on the first tank to enter the kibbutz.  Had the Syrians known that these two obsolete weapons represented half the arsenal of fieldguns in all Israel, they would have pressed the attack. Instead, the armored vehicles swung around in their tracks and clattered back up the mountain road.
•  At Safed, near the Sea of Galilee a small unit of Israeli defenders were holding off a thousand Arabs. A sudden tropical storm broke loose. The Israelis in desperation took their remaining gasoline, poured it over 50 empty drums, set them afire and rolled them down the hill. The flaming barrels flying down the slopes, the rumble of hollow barrels striking rocks—together with the tropical storm—created such an illusion that the bewildered Arabs, imagining some sort of secret weapon, took to their heel and fled.
•  To liberate the airport at Lydda the tactics of Gideon were employed. Seven thousand Arab troops were ready to attack. Sixteen Israelis dressed as Arabs infiltrated into the city of Lydda. Like Gideon’s band of 300 they made such a commotion during the night that the Arabs, totally confused, fired upon each other. Finally the majority fled back across the border.  (That seems to be a favorite tactic of God!)
But the ancient Biblical miracles and the miracles of Israel's re-establishment in the Land have not ended.  Even in this current war with Hamas, the miracles are continuing.  World Net Daily reports that an operator of Israel’s Iron Dome missile-defense system is saying that he personally witnessed “the hand of God” diverting an incoming rocket out of harm’s way.  Here is his eyewitness testimony:  A missile was fired from Gaza.   The Iron Dome precisely calculated [its trajectory]. We know where these missiles are going to land down to a radius of 200 meters. This particular missile was going to hit either the Azrieli Towers, the Kirya (Israel’s equivalent of the Pentagon) or [a central Tel Aviv railway station]. Hundreds could have died.
We fired the first [interceptor]. It missed. Second [interceptor]. It missed. This is very rare. I was in shock. At this point we had just four seconds until the missile lands. We had already notified emergency services to converge on the target location and had warned of a mass-casualty incident.
Suddenly, the Iron Dome (which calculates wind speeds, among other things) shows a major wind coming from the east, a strong wind that … sends the missile into the sea. We were all stunned. I stood up and shouted, ‘There is a God!’  I witnessed this miracle with my own eyes. It was not told or reported to me. I saw the hand of God send that missile into the sea.
This does not surprise me at all.  The East Wind is a recurring force throughout the Old Testament, and it is always a strong, fierce wind.  In fact, it was a strong East Wind that parted the Red Sea and allowed the Israelites to escape Pharaoh and the advancing Egyptian army.  And, so, once again, God stretches out His mighty arm to protect His people. And you don't even have to be pro-Israel to come to this conclusion.  The July 18th headline in The Jewish Telegraph read, "Their God changes the path of our rockets in mid-air, said a terrorist.”  The quote came from a resident of the West Bank, who said that “As one of the terrorists from Gaza was reported to say when asked why they couldn’t aim their rockets more effectively: 'We do aim them, but their God changes their path in mid-air.' "
I have a dear Israeli friend who is living in Jerusalem with her four small children.  She tells me that all they can do is "pray and weep" for the lives lost.  But she also recognizes God's hand in this war as she recounts that "Hamas planned to attack through the tunnels on Rosh HaShana this year, but God has exposed it, and so saved many, many lives."
These stories are all a testament to God's Sovereignty; His Authority and Power.  It strengthens my faith that His will will be done.  The battle between the nation of Israel and the Arab countries is as old as the Bible itself.  But throughout history -- through Israel's triumphs and rebellions; through their blessings and their judgments -- the God of Abraham, Isaac and Jacob has been glorified.
I often ponder if, or when, we will see such miracles in our land.  Lords knows we are in rebellion now and deserve no such wonders or protection.  But regardless of whether we receive our due judgment, or see extraordinary and supernatural marvels, we can know that God is still in control and He rules as He sees fit.  May He continue to protect Israel.

Isaiah 41:12-13      You shall seek them and not find them— those who contended with you. Those who war against you
shall be as nothing, as a nonexistent thing. For I, the Lord your God, will hold your right hand, saying to you, ‘Fear not, I will help you.’