A Different Kind Of War

I want to touch on a subject that I plan on addressing in more detail in a week or so.  It has become quite apparent to me in the past few days that some of my family, friends and acquaintances are dealing with all manner of trials in their lives.  For instance, my husband, Peace-Loving Warrior (PLW), was bit by a scorpion two nights ago; that's a regular hazard here in the country where we live.  In the past, these bites were simply a painful irritation that went away in a few hours.  But the last few bites have had a drastic effect on him:  his face, mouth and tongue become numb, his ears ring, he gets sick to his stomach, and the bite, itself, becomes red, swollen and full of fever.  I can see it in his eyes; he is in distress.
And speaking of eyes, I have recently received a diagnosis of fast-growing cataracts.  I have noticed my eyesight diminishing over the last few months, but figured it was because of the immense amount of time I sit in front of a computer screen.  So now I am awaiting an appointment in a month with an eye specialist to see what can be done.
Then there is another dear friend who has suffered occasional back spasms, but seems to be dealing with increasing pain, although he hasn't done anything to really aggravate his condition.  But his wife told PLW that this time he's having more difficulty recovering.  Another couple we know is dealing with legal issues that could affect their business; the personal attack on their character is hard for them to deal with.  Then there are those of you who I am hearing from through emails that share the troubles and adversities you are experiencing through health issues, problems on the job, and blow-back at your churches.
So why do I mention all these situations?  Doesn't everybody go through these kinds of things?  Yes, they do; life is a series of highs and lows, no doubt about it.  But these particular people that I mentioned all have one thing in common ... they have recently taken big steps in working out their relationship with God.  They may all be on different levels; it doesn't matter.  The Devil doesn't like it when he feels you are making progress in the Lord.
You see, we are all fixated on the ugliness of war in the human realm.  We are seeing it nightly on the news and on the web.  It seems as if the last 10 years we have seen an increase in the violence and repulsiveness of war ... chemical attacks, beheadings, genocide, religious fanaticism and persecution, millions displaced from their homes, famine, and the threat of nuclear annihilation.  But there's another kind of war being waged and it's one we can't see.  It is a spiritual war being fought in the heavenly and unseen earthly realms; and the battle is over us. 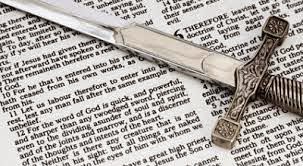 Do you remember the popular series of books by Frank Peretti?  Although fictional, it is my opinion they gave a pretty good representation of the spiritual war that goes on all around us.  Satan believes the earth is his dominion, ever since he lost his place in heaven.  It is his desire to capture man's allegiance and keep us from reconciling with our Creator, as we were in the Garden of Eden before he (the Serpent) managed to corrupt mankind.  But Jesus's arrival on the earth threw a major kink in his plan, and now there is a battle for mens' souls and their subservience before Christ returns.
As long as you are secular or an unenthusiastic Christian, the Devil feels it won't take much effort to get you to relinquish any loyalty to God's Son.  He's not too worried about you.  But when he sees you making a major move in Jesus's direction (no matter what your level of knowledge), then he steps up his campaign and launches his attacks.  If through physical pain, loss of jobs/relationships, or health issues, he can get you to begin to doubt if everything you've heard about God is true, then he can exploit that hesitancy, mistrust, skepticism and uncertainty.  He will do whatever it takes to stop your forward progress.
Through the last few years, as our faith has grown exponentially, and God has shown new and deeper understandings of who He is and what His Word reveals, both PLW and I have experienced what we can only call "spiritual" or "paranormal" incidents.  And they came at a time when we were reaching a new level of comprehension, and God was showing us just how big He is.  That is what is happening to those around us.  Many are new believers or just admitting to their hunger to know Jesus.  Others are traveling to new heights in their relationship and knowledge.  But like I said, it doesn't matter where you are ... Satan knows he is running out of time to capture all the souls he can.  So his attacks are coming faster and more direct.
If you are among those of us who are receiving the attention of the Fallen One, then count it "all joy" as the Apostle Paul would say.  It means you are on the right track and you are dealing the Devil a blow.  But I won't sugarcoat it ... the attacks may become more fierce in nature, and you must prepare yourself spiritually and PRAY!  There's nothing that will call Heaven's angels to your side faster than prayer.  Don't let the spiritual forces of darkness claim a victory over you ... keep talking to God and growing your relationship.  The Devil will be defeated!

In a week or so, I will be writing in more depth about how to wage your own Spiritual Warfare and call upon the Power and Authority of God.  Stay tuned!

2 Corinthians 10:4   "For the weapons of our warfare are not of the flesh but have divine power to destroy strongholds."
Posted by Pam Kohler at 7:00 AM