"The Battle For The Free World Is In Iraq"

I believe there is a very important article on the Christian Broadcasting Network that deserves your attention.  It has been difficult for us Americans to know the truth of our involvement -- or of our planned participation -- in fighting ISIS in Iraq.  We receive confusing messages of "airstrikes" but "no boots on the ground"; of fighting this terrorist movement, yet letting the Iraqi forces defend themselves.  But this article will give you new insight to just how important how part could be.
This week, the formidable fighting force of the Kurdish Peshmerga (which means "Those who face death") were successful in seizing control of the strategic Mosul Dam from ISIS.  The terrorist army had threatened to destroy the dam, releasing a 30-foot wall of water upon downstream cities, including the heart of Baghdad.
CBN News was able to interview one of the district commanders of the Peshmerga, who supplied some valuable information for us, as Americans:  "When they (ISIS) controlled this area, they started to kill people, kidnap women, and slay people in the streets.  This is the way they control other areas. They persecuted Yazidis and Christians and threatened the Christians to either convert to Islam, pay the tax, or be killed." 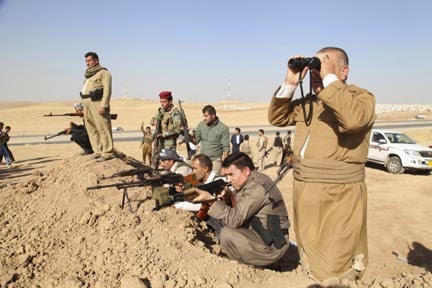 While stressing that they are willing to fight the jihadist terrorists, the Commander underscored two very important facts:  ISIS is better armed than the Peshmerga forces.  Therefore, they need the West and the U.S. to 1) provide them with much-needed weapons and 2) they need training on how to effectively use these weapons.
But perhaps the most important aspect of the Kurdish involvement is that they see themselves as the point of the spear in the battle against ISIS.  "Right now Kurdistan is fighting the terror on behalf of the whole free world," the Kurdish commander said. "The terrorists of ISIS have gathered here from everywhere in the world, and they pose a threat to countries all over the world, from Australia to Europe and other countries."
"The battle of the whole world moved here to Kurdistan," he continued. "Because we are the people of this region, we know how to fight against ISIS. We know the area and we know what we need to do, so this is why we need the support of the world in order to stand against ISIS."
It is quite apparent that they know what is at stake.  Fox News reports on just how passionate the Peshmerga are about their part in this battle against Evil.... old soldiers are coming out of retirement (from around the world!) to rejoin the ranks of Kurdistan’s legendary Peshmerga fighters.  They are hardened combatants; they have years of experience in fighting Saddam Hussein's formidable army, as well as their ancestral enemies, the Turks.  In addition, tribal battles have made them among the most fearsome fighters on the planet.
Plus, there is the added dimension of the courage and strength that the older soldiers offer the Peshmerga.  The new, younger officers say "they are buoyed by the knowledge that their heroes are alongside them and that they will happily follow them into battle."  This unique trend personifies a deeply ingrained Kurdish tradition -- that of deep familial and inter-generational respect. In each unit, one retired soldier is assigned to ten younger ones.
Then, as reported by Fox, there is the especially poignant story of Sherdyl Rwandzi, 49, a taxi driver from Bournmouth, England.  He moved back to Kurdistan six months ago at the urging of his wife and stepmother, so he could join the “battle for humanity.” He recalled his wife telling him, “If you don’t fight for your country, then the foreigners will take it -- and what will your children have left?”
In truth, what will any of the world's children have left, if ISIS is not stopped?  They have have made their goals well-known, even announcing their presence in Ferguson, Missouri!  They intend to conquer the world in the name of their evil fanaticism.  We, in the United States, had better wake up to the realization that we are the end goal, and if they succeed in Iraq, they will be emboldened to continue their advancement of persecution and death.  The Kurds recognize what is at stake.  Do we?

Genesis 9:6    "Whoever sheds the blood of man, by man shall his blood be shed, for God made man in his own image."