As I watch another night of chaos as the situation in Ferguson, Missouri continues to spiral out of control, I am overcome with a deep sadness for my country and for our spiritual disintegration.  I see so many people giving in to pre-conceived theories; speculation that is being fostered by individuals and elements under the authority of Satan's divisive followers.
As I watch another night of looting and rioting, the images are disturbing ... people ransacking businesses like wild animals; throwing bricks and firing guns to release their pent-up frustrations and anger.  On the other side, I see police and law enforcement, in riot gear; rushing to surround protestors, weapons drawn.  Is this who we are as a nation?  As God's children?
Now, we have a rush to convene a Grand Jury, so that ... what?  By providing an indictment, there are hopes that it will satisfy the lust for vengeance ... even before all the evidence can be gathered?  Is that true Justice?  Or is Justice simply a convenient term to disguise the desire to take advantage of an emotional situation, while applying political pressure to calm the violence? 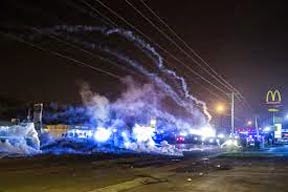 My fear is that it doesn't matter what the evidence will show; both sides already have made up their minds.  People have made the assumptions that all white cops are bad, and all blacks are rioting and looting.  There will be those who will tell me that I have never been victimized or profiled, so I cannot understand what it feels like to be unfairly judged because of my race.
But I did experience just such an incident in my early twenties, when I sold my old Chevy Chevelle to a young black woman, whose father was a pastor.  He had answered an ad I placed in the paper, called me and said his daughter would like to purchase the car.  She arrived at my workplace, with money in hand.  After we concluded our transaction and I handed her the title to the car, she launched into a most vicious diatribe against me as a "White *!#".  I was speechless and felt as if I had been physically attacked!  Where did that come from, and what had I ever done to her?
For days, I tried to mentally understand what had transpired; to figure out why I was singled out.  In the end, all I could devise was that haters hate, that's what they do; oftentimes with no reason or justification.  I had to simply decide that I would not harbor resentment and go on with my life.  I refused to view other black people from my personal experience, or let her hate influence my interaction with other people of her race.
Yet this kind of hate is what we are seeing in Ferguson, Missouri.  Have each one of these rioters or looters experienced an unfair judgment against them because of their race, or are they choosing to listen to agitators outside this situation, and using it as an excuse to foment violence?  What good can come from the New Black Panthers imposing rallies where they shout, "Who do we want?", with the crowds responding, "Darren Wilson".  They then follow up with a chant of "How do we want him?", and the answer coming back is, "Dead!"
Do these people want the truth, or do they want a sacrifice?  Do they want the Grand Jury to take a good hard look at ALL the evidence; or do they want a rush to judgment and an indictment based on their emotions?
So the question becomes, Are we a nation of laws, or not?  If so, then it must be understood that the laws will be obeyed -- and enforced -- or there will be consequences.  When there is inconsistency in how that is accomplished, then the rule of law is eroded and becomes a sham.  We cannot use the Law as a political tool to manipulate the masses.  If we believe that Society needs Laws to protect the lawful and punish the lawless, then we must continue to do what we have established as "right", and in the process to keep serving our fellow man and God.  Because whether the population in Ferguson, Missouri recognizes it or not, God is the true Judge, and He is the One who can reveal the Truth.
We should not rush to judgment based on emotion or past experiences.   Taking the time to gather all the evidence and interview all the witnesses will be the surest way to a fair trial and determining the truth.  If true Justice is to be met -- for both Michael Brown and Darren Wilson -- we should not rush the process.  A life has been taken, and that is always a tragedy; a waste.  But to magnify that loss by listening to the whispers of Satan (the Man of Lawlessness) as he encourages disorder and mayhem, is to diminish the lives of both men.  We must pray for the peace of Ferguson, Missouri!

2 Thessalonians 2:9-10    "The coming of the lawless one is according to the working of Satan, with all power, signs, and lying wonders, and with all unrighteous deception among those who perish, because they did not receive the love of the truth, that they might be saved."