I have to admit that my exposure to video games has been very limited; Angry Birds and online Scrabble competitions are about the only ones that have captured my imagination.  I'd rather read a book to pass the time and relax my mind.  But according to the facts presented by the Entertainment Software Association (ESA), I'm an anomaly. 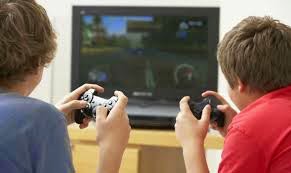 According to the ESA, 58% of Americans play video games.  There are an average of 2 "gamers" in each game-playing household.  The age of game-players is spread pretty evenly across the demographic:  32% are under 18; 32% are 18-35; and 36% are 36 years and up.  And this is where my concern starts to develop.  You see, 40% of video games fall in the "Action, Sports, Strategy, Role-Playing"  and "Persistent Multi-Player Universe" Genres.
Even though I may be a novice about the whole gaming environment, I know enough to know that these Genres can be violent, sexual, and outside society's norm.  What's more, although they may be rated for "over 18", it is generally accepted that children under that age are often exposed to, and are playing these games.  And it doesn't lessen my concerns when the President and CEO of ESA has this to say:  “No other sector has experienced the same explosive growth as the computer and video game industry. Our creative publishers and talented workforce continue to accelerate advancement and pioneer new products that push boundaries and unlock entertainment experiences. These innovations in turn drive enhanced player connectivity, fuel demand for products, and encourage the progression of an expanding and diversified consumer base.”
But does any of that sound like it would be good for our culture?  Has technology opened a portal, exposing our society and minds to the unimaginable in aberrant and deviant behavior?  There will be those who say sex and violence in video games has no adverse effects upon behavior.  But then there's  Elliott Rodger, who killed 6 people and injured 13 after leaving a scathing manifesto on his hatred of women.  Breitbart BBC writes, "Rodger didn't kill because the video games made him violent, but the games did help to shape his violent fantasies. They provided a framework through which his online bloodlust turned into real-world slaughter."  Too many video game enthusiasts can't tell the difference between fantasy and reality!
So now, let me tell you about one particular game that pushes the boundaries into perversion.  Grand Theft Auto (known as GTA in the gaming world) is one of the most popular video games ever developed.  When it arrived on the scene in 1997, it rocked the video game world.  It took "gaming" to a whole new level, one in which "as the player, you could run around, partaking in all manner of criminality, with the intent of rising to the top of the gangster underworld by any grotesque means necessary." It was a game where you could be the bad guy; and you could take part in drugs, prostitution and random violence, all while being anonymous behind that computer screen.
Advance forward 17 years and Grand Theft Auto V will allow characters in the game to have sex with a prostitute before beating her to death and stealing her money.  How's that for growth and social progress?  Apparently, supporters of this genre feel this is just a natural expansion of the creative development process; the game remains " gratuitously and unapologetically violent."
But now there appears to be a new element to all this "fun".  Players will be allowed to make "in-game purchases."  They will be able to enhance the game by paying more money to modify the game to meet their own unique cravings; such as letting players ride a UFO, or playing the game while totally submersed under water.  But players will also be able to effect the "virtual reality"of other players... and in some utterly evil ways.

It seems that players are complaining that these modifications (or mods, as they are known) are forcing their characters to do things they don't want to do.  Some mods such as doing push-ups might seem harmless and uncontroversial.  But remember that it is accepted that under-age kids have been able to access this game.  So imagine that your 12-year old is secretly playing this game over at his best friend's house and his character was attacked by one of these mods.  Let me share with you what one young gamer experienced:   How it initially began is my friend was being taken advantage of in a more remote part of the map, which I was unaware of. I went to his area to find out he was not alone. There was this other user, the user in question, in the area. I have never played with this modder, nor am I friends with him, nor were we in a party. This guy was a total random stranger who just dropped in the free mode session.  Quite literally, I and a couple friends of mine encountered a stranger and we were raped and forced to strip dance in GTA online. It was like a "traumatic life" simulator.
What kind of sick culture do we live in?  To make matters worse, there are even a few YouTube channels full of videos "showcasing" GTA Online rape.  Sales are expected to go higher than 25,000,000 for this deviant game, whose developers pride themselves on being named by the Guinness Book of Records as the most controversial video game in history.  They are proud that their game is like "a black mirror" set up to reflect society.
Now, the Entertainment Software Association would like you to think that video games are safe; that parents are involved in approving what games their children play, and are aware at all times what game their child is participating in.  But, Breitbart BBC makes it very clear that since "GTA is an online game that's being modded, players get to rape other real-life players. Some of those other players are very young: GTA is rated 18, but has hundreds of thousands of teen addicts."  And who is doing the modding?  The acts are disturbing, to say the least, but does anyone doubt that, with 36% of video game players over the age of 36, there aren't pedophiles "trolling" these online sites for unsuspecting victims?  As one young player shared, "You cannot kill him and there is nothing you can do about it."
I am ashamed as to how far we have fallen.  God has been pushed out of nearly every sector of our lives, including socially and politically; and the result has been moral depravity.  Once again Satan has used the rapid advancements in technology to introduce us to new and more vile temptations.  And yet one of our culture's elite -- none other than the senior curator of the Museum of Modern Art's Department of Architecture and Design had this to say,  “I consider video games a form of design that is amazingly important today and that is going to become even more important in the future, because it is a way we interact with machines and screens."    We would be much better off interacting with humans in reality, than connecting with machines through fantasy "screen relationships".  Again, I say ... technology is proving to be a means to the destruction of our unique character and spirit, which is "made in the image of God".  Heaven help us to protect our children!

1 Corinthians 15:34    "Become sober-minded as you ought, and stop sinning; for some have no knowledge of God. I speak this to your shame. "