Testing The Limits In The Heartland

The alarming situation in Ferguson, Missouri has so many undertones, it has got us all scrambling for answers ... and the truth.  I must admit that I am very conflicted because I'm confused about what we're being shown by the media ... and why.  I believe that nothing is done by chance.
There are images of out-of-control looting and rioting, which serves no purpose except for taking advantage of a volatile situation.  There is news coverage of police in full military gear arriving in armored vehicles, shooting rubber bullets and tossing tear gas canisters at citizens.  Photos appear online of cars and stores on fire, and thugs lighting molotov cocktails; clearly these citizens are breaking the law.  And then there are stories of journalists being arrested for attempting to report on all the chaos; the freedom of the press appears to be suppressed by a militarized police force. 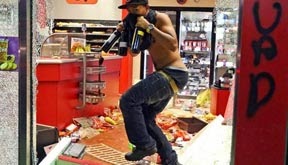 So what are we to think?  Is this going to be another racially-charged circus like the Trayvon Martin incident?  Was this the murder of an innocent victim by an overzealous cop, or was it a justified shooting of a combative robbery suspect?  How do we keep this explosive crisis from being used by different factions for their own purposes?  Like I said, I don't have the answers ... but I fear that the ramifications we could see coming out of Ferguson, Missouri are nothing any of us wants.
I have to admit that I have nephews who are police officers, and who work in communities adjacent to Ferguson, although none of them are part of the police presence we've seen televised, thank God.  But I know of the dangers that they face each day, and of the lawlessness that is embraced in the surrounding areas.  Unemployment is incredibly high and incentives to escape the economic hopelessness are low.  That's not a good combination for producing law-abiding citizens, nor is it a reason to adopt victimhood.
On the other hand, I am quite disturbed at the videos I've seen of police in camo and helmets, as if they are waging war against American citizens.  As Senator Rand Paul stated, "The images and scenes we continue to see in Ferguson resemble war more than traditional police action…. Washington has incentivized the militarization of local police precincts by using federal dollars to help municipal governments build what are essentially small armies—where police departments compete to acquire military gear that goes far beyond what most of Americans think of as law enforcement." 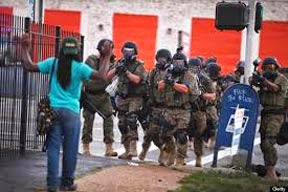 I think we can all agree that police must be given the authority to keep the peace and enforce our laws.  But when the police take on the appearance and role of a military-like agency, then it is only natural that we citizens fear the loss of our constitutionally-guaranteed rights.  And because the news media is always looking for that "juicy" story to boost ratings, nothing gives them more opportunity to fill air time than a racial incident, and we all know that they can distort their coverage to show any narrative they want.  So what's the real story they want us to take away from the non-stop reporting?  (Keep in mind, there's always the possibility we're only seeing what they want us to see).
But I have two very real concerns regarding this unfortunate situation.  And I think they both point to the heart of the matter.  Number One:  Will true justice be served?  Conflicting stories on the victim have surfaced, and are sure to muddy the legal waters.  Was he innocently walking down the street when he was harassed by a prejudiced police officer, as his companion states?  Or did he fit the description of a robbery suspect at a nearby convenience store, as new crime scene photos seem to suggest?  (That same companion is allegedly an accomplice in that robbery).
And once again, as in the Trayvon case, the officer (who claims self-defense) supposedly has injuries sustained in the confrontation with the victim.  The police department of Ferguson has handled this affair poorly.  Information has been sporadic and conflicting; thereby, lending an air of suspicion to the whole proceedings.  They haven't helped us feel confident we're getting at the truth.  (Maybe we're not supposed to feel "confident"?  Sorry, my conspiratorial side is on the loose).
Number Two:  My greatest fear is that this "crisis will not go to waste", and any number of players can use this calamity to their advantage.   The recklessness of the citizenry can be manipulated to give the government cause for instituting martial law.  There are groups such as the Black Panthers that will eagerly use the death of Michael Brown to further their agenda of alienation of the races.  There are politicians and social engineers who will use Ferguson to promote their position that economic disparity and discrimination in the judicial system are reasons to  justify the actions of looters and rioters ... that their "outrage leading to destruction" is a natural reaction, so to speak.
With this many elements all jockeying to further their "agendas", there will be no winning side.  We all stand to lose.  And if each group is given a little piece of the pie in an effort to appease them, then one more brick crumbles at the foundation of American freedoms and our way of life.  We will all be a little less than we were a week ago.  But then again, (smirk, smirk) maybe that's the plan....

Latest News:  Out of this chaotic situation steps the calming, professional influence of Missouri State Highway Patrol Capt. Ronald S. Johnson.  The governor of Missouri was smart enough to hand over the reins of security control to Johnson, and the result was a night of no arrests, no tear gas, and the opportunity for the citizens of Ferguson to exert their First Amendment rights to peaceably assemble.
Captain Johnson did what should have been done from the outset; he listened.  Watching him at a news conference, I couldn't help but think, "This man knows how to communicate with the people.  He knows how the police presence should be represented.  And most of all, he knows how the police and the community need to respect each other."  He removed all the heavy military gear; including gas masks, military armored vehicles with sniper posts, and most specifically, the attitude.  He then walked the streets with the protesters, showing them they had nothing to fear from the police, and that  they needn't destroy their own communities in the effort to express their opinions.
As I listened to him speak, it was obvious that this man is special.  I could sense that he wants the best for all parties involved and he will tolerate neither lawlessness nor injustice.  Could he be the answer to prayers for non-violence and godly leadership?  Then he quoted Scripture and my soul leaped in response!  Thank you, Lord for sending this compassionate man in the midst of all the Enemy's servants.  Perhaps Evil just got check-mated and Ferguson can begin to heal!

Ephesians 5:11    "Take no part in the unfruitful works of darkness, but instead expose them."