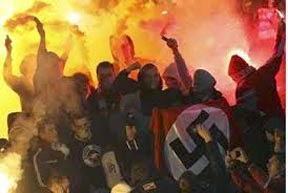 This is the rallying cry of Jews throughout Europe as they see the writing on the wall, and vow to stop the hate crimes against their religion by radical Muslims and supporters of the Left.  And it looks as if they have good reason to be on the defensive.  Israel National News cites a study by the World Zionist Organization that reports "Anti-Semitic attacks have increased by 436% in Europe, 1200% in South America, 600% in South Africa, 800% in Oceania, 127% in the United States, and 100% in Canada."
These attacks include the burning of Israeli flags worldwide.  Mezuzahs (a parchment inscribed with religious texts and attached in a case to the doorpost of a Jewish house as a sign of faith) are being ripped from homes.  Jewish shops around the world are torched.  And the delegitimization of Israel by pro-Arab sympathizers all serve to undermine the security of hundreds of thousands of Jews around the world.
But European Jews are living by their pledge to "never again" allow a Holocaust like the one instigated by Nazi Germany.  Throughout Europe, Jewish groups are hiring former, elite Israeli soldiers as security guards for Jewish institutions and synagogues. 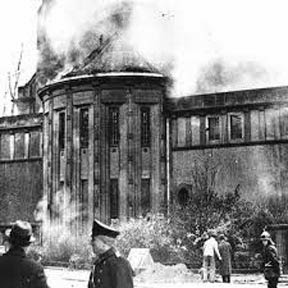 Stephen Brown, writing for David Horowitz's Freedom Center and Front Page Mag, says "Well aware of history, German Jewish associations know the first major step in any planned liquidation of Europe’s Jewish communities, especially of their own, is the destruction of their synagogues. This is what occurred in Germany in November, 1938, and later came to be called ‘Kristallnacht’ (Crystal Night). In one night, Nazi thugs destroyed all the synagogues in Germany and Austria as well as many Jewish businesses, homes, cemeteries and social meeting places. The ‘Kristall’ refers to the debris of broken window glass lying on the ground afterwards from destroyed synagogues and Jewish stores."
That night over 100 Jews were killed in the ensuing violence.  The Nazi regime held the Jewish community responsible for the physical damage and subsequently imposed a collective fine of $400 million (in 1938 rates); this according to the U.S. Holocaust Memorial Museum.
History.com further relates that "more than 30,000 Jewish men were arrested and sent to the Dachau, Buchenwald and Sachsenhausen concentration camps in Germany–camps that were specifically constructed to hold Jews, political prisoners and other perceived enemies of the Nazi state."
Today, European Jews recognize that Kristallnacht was the night that the harassment of Jews in Germany turned to violence, and that it directly led to the extermination of over 6,000,000 European Jews.  Kristallnacht was a turning point, and they are determined that such evil will happen "never again". 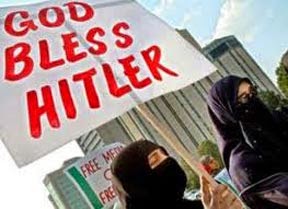 In his article, Brown writes that, today, "radical, anti-Semitic Islamists have replaced the brown-shirted thugs. And they are becoming just as violent as their predecessors in expressing their anti-Jewish hatred."  France has been the scene of particularly violent hate crimes; with French jihadists attacking Jewish community centers and synagogues; and murdering children at Jewish schools, and killing attendees at Jewish museums.  The anti-Semitic attacks have gotten so bad in France, that Jews are leery of walking to synagogue;  physical and verbal assaults occur daily.
You know it is getting bad in Europe when a visiting German-Jewish lawyer tells an Israeli parliamentary committee, "Things are happening (in Europe) that we have not seen since 1933."
So the question is this ... Do the European governments have the courage to fight back against such hatred and evil?  Will they try to appease it or ignore it?  Surely, they remember their history and what such lack of action encouraged! "Harshly denouncing" the actions will not be enough!
If nothing else, the current and growing anti-Semitism throughout Europe and the world should be a wake-up call to Jews and non-Jews alike.  I believe humanity must not allow such atrocities to happen again.  And I believe that God will not see His chosen people suffer such Evil a second time.  He has restored them to the land; and if the hatred and the violence continues to grow, it won't be long until they cry out, "Blessed is He who comes in the name of the Lord."
Just this week, an orthodox Jewish rabbi from New York was shot and killed in Miami, Florida on his way to worship --- this, just days after a swastika was painted on a nearby synagogue.  It's here, people!  Evil is once again targeting Jews and we must all make a personal decision ... will you denounce such hatred?  I do not believe God will let it go unanswered this time.  Come, Lord Jesus!

Psalm 83:1-4    "O God, do not keep silence; do not hold your peace or be still, O God! For behold, your enemies make an uproar; those who hate you have raised their heads. They lay crafty plans against your people; they consult together against your treasured ones. They say, “Come, let us wipe them out as a nation; let the name of Israel be remembered no more!”