It still dominates the headlines ... EBOLA.  Breitbart.com reports that a Spanish missionary priest died of the disease in Madrid this last Tuesday.  They are also reporting that China has quarantined 8 medical workers who had direct contact with ebola patients in Sierra Leone while helping to treat victims of the deadly virus.
Breitbart is also reporting that there is grave concern in China over the spread of the virus, as it is estimated that 20,000 Chinese citizens are living and working in the three African countries most directly affected by Ebola.  If any of these health workers return to China carrying the virus, the potential spread of the disease among the crowded urban communities of China could potentially result in the deaths of thousands, if not millions.
Then you have the changing position of the Center for Disease Control, who initially claimed that you had to come in contact with an Ebola patient to contract the disease.  Now, they have amended their statement to "being within 3 feet" of an infected person or "being in the same room" with an infected person can allow for transmission of the disease! They also admit a person who is infected, but not yet showing symptoms, is contagious!
And finally, Bloomberg News is telling us that "The Ebola drug given to two Americans and a Spanish priest has been sent to treat infected doctors in two West African countries, and the supply of the medicine is now gone, its manufacturer said."  Which raises the serious ethical question ... with a shortage of any kind of medicine to combat the disease, who will receive the few available doses of life-saving drugs?  Will the poor Africans, or will it be dispensed to those with the resources and the money to demand it? 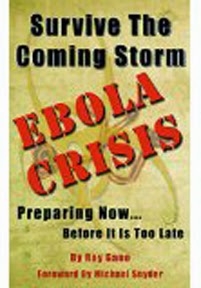 That brings me to my recommendation .... Ray Gano, the Publisher and Executive Director of the web ministry  Prophezine, which provides a wide variety of spiritual and physical preparedness articles, has published a new book that offers some valuable information and advice on how to protect your family during an Ebola pandemic.
None of  us wants to think about this happening, but if you are paying close attention, the indications are it is a very real possibility.
Ray's book, titled Survive The Coming Storm - EBOLA CRISIS (Preparing Now... Before It Is Too Late) is a book you want to have in your possession, if the worst case scenario materializes.
As Ray points out, the Ebola virus appears to be spreading faster than the efforts to contain it.  Therefore, we would be wise to develop a quarantine plan now, and stock up on the supplies you will need to prevent and/or treat the virus.  And he gives you a concise strategy for accomplishing this for your family.
He gives you the products and the methods for sterilizing your home, and how to set up a quarantined patient room, if necessary.  He offers advice on how to keep the virus from spreading in your home, and how to safely handle the sanitation issues when caring for an Ebola patient.
His book also offers valuable advice on supplements and over-the-counter products to boost your immune system and prepare your body to fight off the virus.  He tells you how to prevent, identify and treat dehydration, the primary cause of death in Ebola victims.  And, because it is necessary, there is even a chapter on how to deal with the death of a loved one.
This book is not designed to frighten you or to cause you to panic ... it is written to help you be prepared to deal with a worldwide pandemic before it happens.  There have already been over 1000 Ebola deaths in Africa, and nearly 2,000 suspected cases, in just over a few short months.  Until this year, the world had recorded 1,640 deaths TOTAL from Ebola since the virus was discovered in 1976... you can see the potential for this to turn into a global disaster.
That's why the time to add Ray Gano's book to your preparedness collection is NOW!  Don't wait until the epidemic spreads like wildfire to try to gain this information or gather together your supplies.  It will be too late!  You can listen to scientists and doctors, who tell you it is too early; there's no need to panic.  Maybe they're right.  Or you can rest easy at night, knowing that you have given your family a chance, should the worst happen.  This is a valuable resource to have.  Click on the provided link and check it out ... I highly recommend it!

Revelation 11:6    "They have the power to shut the sky, that no rain may fall during the days of their prophesying, and they have power over the waters to turn them into blood and to strike the earth with every kind of plague, as often as they desire."