The Border Crisis & The Reconquista

The #1 story in the U.S. news cycle is the crisis on our southern border.  It is not only a story of thousands of illegal immigrants being allowed to enter the country, but it is also a narrative concerning the spread of disease, the imminent danger to our homeland from terrorists, and the will of the people being ignored.  The Border Patrol agents are reporting (and contracting) communicable diseases that threaten all of America, as busloads of people are delivered throughout the country.  And author Dave Hodges describes the biggest threat, when he says, "Some of the people crossing our border are violent gangsters posing as children. And some of the people are terrorists posing as immigrants."
But could it also be a not-so-subtle plot to encourage "The Reconquista?"  In case you are unfamiliar with this term, in Spanish it means "the reconquest", and was popularized by contemporary Mexican writers Carlos Fuentes and Elena Poniatowska to describe the increased demographic and cultural presence of Mexicans in the Southwestern United States.  And it has taken on even more significance since becoming the battle cry for La Raza and its student/university arm MEChA (Movimiento Estudiantil Chicano de Aztlán). 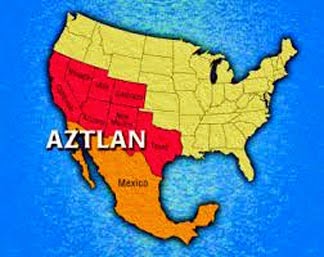 In legal terms, La Raza is "the largest national Hispanic civil rights and advocacy organization (community organizers?) in the United States, and works to improve opportunities for Hispanic Americans."  In its more radical, cultural application, it has repeatedly called for the seizure of several states (Texas, New Mexico, Arizona, California, Nevada, Utah and Colorado) and make them into an independent country called Atzlan (which is the legendary ancestral home of the Aztec, one of the main cultural groups who later adopted the identity of Mexica, and who are closely associated with modern Mexico).
This seizure of a portion of the Southwest United States, and the establishment of Aztlan is at the heart of "The Reconquista".  (It also served as the storyline for the second book in Matthew Bracken's popular trilogy, Domestic Enemies: The Reconquista.)  But it is the mission statement of MEChA that gives us the clearest picture of this ideology as outlined in their Spiritual Plan for Atzlan:  “In the spirit of a new people that is conscious not only of its proud historical heritage but also of the brutal gringo invasion of our territories, we, the Chicano inhabitants and civilizers of the northern land of Aztlan from whence came our forefathers, reclaiming the land of their birth and consecrating the determination of our people of the sun, declare that the call of our blood is our power, our responsibility, and our inevitable destiny. … Aztlan belongs to those who plant the seeds, water the fields, and gather the crops and not to the foreign Europeans. … We are a bronze people with a bronze culture. Before the world, before all of North America, before all our brothers in the bronze continent, we are a nation, we are a union of free pueblos, we are Aztlan. For La Raza todo. Fuera de La Raza nada. Chicano is our identity; it defines who we are as people. It rejects the notion that we…should assimilate into the Anglo-American melting pot…Aztlan was the legendary homeland of the Aztecas … It became synonymous with the vast territories of the Southwest, brutally stolen from a Mexican people marginalized and betrayed by the hostile custodians of the Manifest Destiny.” (Statement on University of Oregon MEChA Website, Jan. 3, 2006).
Eight years later, they must be seeing the glimmer of hope that their plan is coming to fruition.  And it is time to sit up and take notice when you hear statements, such as this, from Miguel Perez of Cal State-Northridge's MEChA "The ultimate ideology is the liberation of Aztlan. Communism would be closest [to it]. Once Aztlan is established, ethnic cleansing would commence: Non-Chicanos would have to be expelled -- opposition groups would be quashed because you have to keep power."
And just how would this power be perpetuated?  First of all, you need to know that La Raza is extremely well-funded through American tax dollars.  In one year (2005), La Raza received $15.2 million in federal grants. Of this $15.2 million, $8 million came from the U.S. Department of Education.  It has even been rumored that some of this money goes to get-out-the-vote efforts (There's the community organizer aspect, again).  Combine this information with the fact that our President openly supported La Raza during his 2008 Presidential campaign, and reports that the recently stalled Senate Bill 744 supplied a secret $300 million dollar slush fund which was earmarked for La Raza, and you begin to wonder if there isn't some under-handed collusion going on.
And before anyone accuses me of being racist or anti-immigration, I acknowledge how much the Hispanic population contributes to this nation, and I welcome any person of any nationality or color into this country who is willing to abide by our laws and desires to become part of our American family.  But the erasure of national borders and the "reconquering" of our nation is not something that I can recognize or concede.  And when I see groups become radicalized for the purpose of furthering distance and discontent between American citizens, then I become concerned about their motives.  It is becoming more and more obvious that this border crisis is being manufactured for increasingly suspect purposes.   Keep an eye on this situation and keep looking behind the curtain.