A "Game-Changer" or An "Eliminator"?

I hate that I am at the point of questioning every "good" report or research discovery that comes from the latest health/government/university study.  Now, claims that the heinous disease of Alzheimer's will be the new beneficiary of ground-breaking research once again leaves me wondering if we are being helped or hindered.
Scientists and researchers from no less than the Australian Commonwealth Scientific and Industrial Research Organization; Dr Simon Ridley, head of science at the charity Alzheimer's Research UK; US researchers at Harvard Medical School; and scientists at Columbia University are all supporting their findings that simple and regular eye tests could be used to identify Alzheimer's disease at a very early stage. 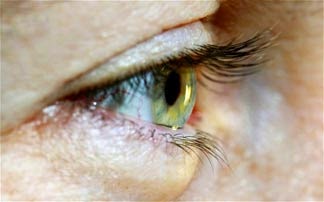 In fact, the health editor at The Telegraph, writes that "early trials of two different techniques show that a key biomarker for the disease can be identified in the retina and lens of the eye.  Both methods were able to distinguish between healthy volunteers and those likely to be suffering from Alzheimer's patients with a high level of accuracy."  She goes on to say that, "Experts said the findings could be a “game changer” in treatment of the condition."  (I'm not real thrilled with that word "likely".  Are you?)
And here's where my cynical little mind goes to work .... a US company called Cognoptix, Inc is involved in this research and supplied an ointment that provided a promising biomarker for the detection of beta amyloid proteins responsible for the formation of plaques in the brains of Alzheimer’s patients.  The co-founders of this company just happen to be the two doctors who identified the biomarkers, and I'm assuming, developed the ointment.  Furthermore, the Cognoptix, Inc. website says "Cognoptix is currently developing combined optical scanning devices and diagnostic agents based on these discoveries for clinical, commercial and academic research use. The company is actively forming and seeking new strategic alliances with pharma partners and academic institutes, while preparing its diagnostic platform for clinical use."  (My emphasis).
Maybe I'm just a tad bit too suspicious, but a couple of red flags just popped up!  There have been quite a few indications that Big Pharma and Obamacare are willing bedfellows; among them the connections between Liz Fowler (the architect of the Affordable Care Act) and the nation’s largest health insurance provider Well Point.  She has also lent her considerable insider Washington influence and power to pharmaceutical giant Johnson & Johnson.
What would keep Big Pharma, and companies like Cognoptix, Inc and the government from colluding to identify potential Alzheimer's victims, and subsequently a) denying them health care coverage, or b) passing their names on to possible "death panels"?
Shaun Frost, the Australian scientist/researcher who led the study, said, ""We envision this technology potentially as an initial screen that could complement what is currently used: brain PET imaging, MRI imaging, and clinical tests.  If further research shows that our initial findings are correct, it could potentially be delivered as part of an individual's regular eye check-up."  So now your eye exam can be used to add you to another "list".
Having watched family members suffer from this awful disease, I welcome any medical advancements that would help to identify and treat this illness.  But even Cognoptix, Inc. admits that diagnosing the disease is a challenge and, to my knowledge, there has been no scientific or medical breakthrough for curing it.  So, it seems to me that the positive aspect of this latest study is that it offers the opportunity for early detection, and hopefully, would encompass attempts to slow down the progress of the disease.
I guess the negative aspects depend on whether you trust the government, the health insurance companies and Big Pharma, who stand to make a lot of money on the application of any ointments or medical procedures.
Like I said at the beginning of this post, skepticism has become the bane of my existence when it comes to any health procedure that the academics claim will "help" me.  I wish I could feel that their concern for humanity trumped their "strategic alliances" and greed for the Pharma dollar.

Psalm 101:3    "I will not set before my eyes anything that is worthless. I hate the work of those who fall away; it shall not cling to me."