The Hegelian Dialectic & The Border Crisis

I've got the beginnings of a picture forming in my mind, and I'm trying to fit all the puzzle pieces together.  It starts with the concept of the Hegelian Dialectic. If you're unfamiliar with this terminology, I'll try to explain it as simply as I can.  Named after Georg Hegel, an eighteenth-century philosopher, this theory has long been adopted by governments and ruling classes to manipulate their citizens into preconceived plans of action.
I have seen it explained in this format:  PROBLEM-REACTION-SOLUTION.  Look at this way; say a government has a Policy A that it wants to institute.  But they know that there is no way the majority of their citizens will ever accept or approve that policy.  So, they keep their plans under wraps: and instead the government creates Problem B, which is SO BIG (think terrorist event, mass shooting, killer virus) that it is covered night and day on every news outlet in the nation.  The news coverage manipulates and molds society's reaction and creates such disorder in the populace, that they clamor for the government to solve this manufactured problem, which ... surprise, surprise ... just happens to be Policy A that has been kept in the closet and can now be brought forth, and which is happily accepted by the deceived populace.
Smarter people than me have attributed these major events to the Hegelian Dialectic:  WWI and WWII were manufactured by the bankers to bring them more power, and to establish the League of Nations, the United Nations, and the European Union.  In general, all the modern wars -- the Cold War, the Vietnam War, the Afghanistan and Iraq Wars, the War on Terror, the War on Drugs, etc.  -- have all been designed to increase defense spending, higher debt, and more poverty; and the world's elite bankers just keep getting richer.  And don't forget such manufactured events as the Energy Crisis, the Climate Crisis, and every nation's Economic Crisis ... all created from a preconceived agenda.
So now that you should have a clearer picture of how the Hegelian Dialectic works, how does it fit in with the crisis on our southern border?  Remember, there has to be an agenda that the American people would never agree to in the beginning.  One possible plan is this: the elite in our government (that includes both parties) are all about power, and there are millions of illegal immigrants in this country that potentially represent a huge voting bloc that would guarantee that power.  However, the elite have been unable to sell the idea of complete Amnesty, no matter how hard they've tried. 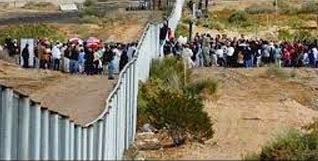 So what if they create the problem of thousands of homeless, immigrant children on the border and continuously cover the "humanitarian crisis" on the news?  Add to that the fears of rampant disease and possible terrorist infiltration.  Then create some further chaos by shipping busloads of these illegal immigrants to cities across the country.  Is that a big enough PROBLEM for you?
Who could deny that they are getting the REACTION they want?  They need chaos, conflict, and hostility to grow if they are going to offer the SOLUTION that will satisfy the masses, but which is really what they wanted to accomplish in the first place.  The big question is this: what is the true agenda they are trying to accomplish, and how far are they willing to go?  Is it really a vast, new voting bloc to ensure power for the next several generations?  Or is it something even more threatening, such as instigating such turmoil and upheaval that our present system of government will need to be reconstructed?
Just in case you think that my tin foil hat is screwed on a little too tight, I would like to point you to an article on SHTFPlan.com back in January of this year, and ask you the following questions:  Why in January of 2014 --- six months ago --- was FEMA seeking contractors who could supply medical biohazard disposal capabilities and 40 yard dumpsters to 1,000 tent hospitals across the United States; all required on 24-48 hour notice?  Why in October of 2013 -- nine months ago -- was the CDC soliciting 31,000 doses of pediatric flu vaccine?  During that same time period, FEMA requested over 100,000 winter and summer shirts and pants, tarps, and pre-fabricated housing units.
There were all kinds of theories among the conspiratorial crowd, but perhaps the PROBLEM just had not come into view yet.  Perhaps what we saw in January was the pre-arrangement for the PROBLEM they were planning.  Could the Hegelian Dialectic be in play as we face this border crisis?  Can we, the people, avoid playing into the hands of the Elite? Can we solve this PROBLEM on our own, thereby defeating their pre-designed agenda?
Honestly, they've been pretty successful so far ... it would take a miracle to defeat their plans.  But,  I just happen to believe in miracles and the power and authority of my God.  I cannot answer if He will foil the evil schemes in this spiritual war; I can only pray that He will guide us in His purpose and His will.  That's the best SOLUTION we've got.

Zechariah 8:17    "Don’t plan evil for each other. Don’t adore swearing falsely, for all of these are things that I hate, says the Lord."