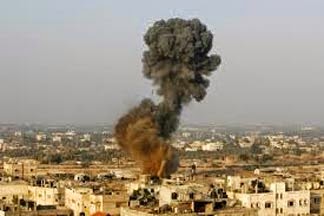 The world's media machines are working overtime to get "their truth" out about the crisis in the Gaza Strip.  Amid the recent rocket launches between the militant Palestinian group Hamas and the Israeli Defense Forces (IDF), both sides of these attacks are scrambling to put forth their side to justify their actions.
For instance, the Centre for Research on Globalization (CRG) is an independent research and media organization based in Montreal, Canada, and it is their website's position that Israel’s present assault on Gaza is a continuation of their policy of incremental genocide against the occupied Palestinian people.  According to GlobalResearch the reasons for the increase in military action can be best expressed by the question "What came first?  The chicken or the egg?"
Although the current hostilities seem to have been compelled by the kidnappings and killings of three Israeli schoolboys, and then the retaliatory killings of two Palestinian youths, GlobalResearch wants you to consider that the 3 Israeli youths murders were "perhaps in reprisal for killings of Palestinian children" during a long history of Israeli "oppressive occupation."  That's one way to spin it.
The historical truth concerning this hotbed of violence is this: Palestine has always been situated at a strategic location between Egypt, Syria and Arabia, and it is the birthplace of Judaism and Christianity.  The Palestinian region has a long and tumultuous history as a crossroads for religion, culture, commerce, and politics. The region has been controlled by numerous different peoples, including Ancient Egyptians, Canaanites, Israelites, Assyrians, Babylonians, Persians, Ancient Greeks, Romans, Byzantines, the Sunni Arab Caliphates, the Shia Fatimid Caliphate, Crusaders, Ayyubids, Mameluks, Ottomans, the British and now, modern Israelis and Palestinians.
Boundaries of the region have changed throughout history, due to agreements between nations after various wars, and were last defined in modern times by a French-British boundary agreement (1920) and the League of Nations mandate in 1922.  Today, the region comprises the State of Israel and Palestinian territories in which the State of Palestine was declared.
So, in reality, nothing is new.... this territory has long been in dispute and its ownership has often been determined by the victors of war.  Today's conflicts can trace their roots to the aftermath of Hitler's diabolical Holocaust, and the birth of Zionism.   Of course, to many,  Zionism has become the trademark "dirty word" for any attempt by Israel to defend itself.
Originally, this term was understood as a movement for the re-establishment and (now) the development and protection of a Jewish nation in what is now Israel.   In short, it is the rebirth and renewal in the Jewish homeland established for them by Jehovah God.  In today's understanding, Zionism is often seen, by its critics, to mean it as a colonialist or racist ideology that led to the denial of rights, dispossession and expulsion of the "indigenous population of Palestine".
Those who claim that the Palestinians are innocent refugees in their own land, will side with the group Hamas, which was founded in 1987, when several Palestinians were killed in a traffic accident involving an Israeli driver, and the events that followed—a Palestinian uprising against Israel's West Bank and Gaza occupation—led to the founding of Hamas as an offshoot of the Muslim Brotherhood movement.   It has since developed a militant military wing, devoted to the elimination of Israel as a state.  It is this group, who has been blamed for the initial killing of the three Israeli youths.
When Israel responded with the deaths of the Palestinian youths, the rocket exchange began.  Pro-Palestinian media will accuse Israel of killing innocent Palestinian citizens, including women and children.  GlobalResearch will tell you that "Harmless and aimless rockets fired from Gaza are the Palestinians’ only way to fight back", and that Israel's aggression and military blockade are reason enough to fire upon Israel.  "Enjoying freedom of movement and peace are basic rights of all people, but if Palestinians can’t enjoy that right then neither should the Israelis."
On the other side, WorldNetDaily will tell you that the Israeli military has aborted planned missions that would have eliminated 14 of the top senior terrorists in the Gaza Strip because it would have taken too high a toll on the civilian population.  An IDF spokesperson is quoted as saying that Hamas rulers "have been using civilians as human shields and hiding command centers and rocket silos in apartments, hospitals and mosques."  If true, the high fatality rate of children and innocent Palestinians lays squarely on their shoulders.
Currently, it appears that the media senses the escalation of violence and rhetoric against the nation of Israel, and is climbing on the bandwagon to declare Israel at fault.  Peace negotiations through the tepid efforts of the U.S. are designed to provide no solutions.  As throughout its history, Israel will need to rely on their God to protect and deliver her.  Yet, much about the Jewish state mirrors our rebellion against the God of Israel.  Are they going to receive God's purifying discipline, just as we are experiencing?  And are we seeing all the nations lining up against Israel as in Ezekiel 38 and Psalm 83?
I can't answer these questions, nor can I see a way for this standoff to be peaceably and successfully refereed.  The one thing I know for sure ... the enemies of Israel are the enemies of God. Nations and individuals need to think very carefully before they align themselves with those who God would judge guilty of cursing Israel.  No amount of propaganda can change His mind.  History has proven that this was once Israel's ancient homeland, and the Bible declares that it will remain so.  That is the Truth of the entire dilemma.

Zechariah 2:8    "The Lord of heavenly forces proclaims concerning the nations plundering you: Those who strike you strike the pupil of my eye."