This Fourth of July feels different.  In the past, I've always felt our liberty and freedom were assured; that the soul of 1776 was still recognizable in our nation.  But for the first time in my life, our future seems ....  fragile and vulnerable.
The one thing I know for certain is that I still believe in the "Spirit of 76".  I am well aware of how this country defies all the odds; that the freedom and independence we have known for the last 238 years is not a natural state of mankind in the world.  In fact, this country broke all the molds when it came to men and what rights they possessed.  "Natural and inherent" rights became a new philosophy that challenged the old order of kings, aristocracy, and the elite. 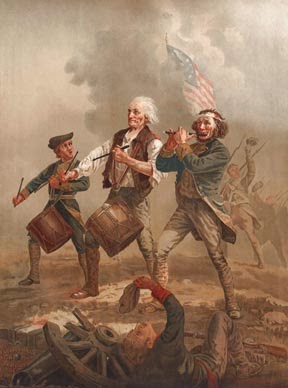 But what did our Founding Fathers mean when they claimed that "all men are created equal ... and endowed with certain unalienable rights...."?  I think John Adams explained it quite well:  ""I say RIGHTS, for such they have, undoubtedly, antecedent to all earthly government; Rights that cannot be repealed or restrained by human laws; Rights, derived from the great Legislator of the universe."
It seems to me that our Founding Fathers believed in the concept that we are not all created with the same talents or circumstances, but we are created with the same rights to become all that we can be; all that God has made us to be.  I believe that they defined a "right" as something endowed at birth that cannot be taken away.  They expanded that philosophy to include property rights and economic freedom as integral and essential parts of man’s natural rights.  They developed this unique ideology from the example of their ancestors; the Puritan work ethic valued hard work, providing for one’s family, and the right to keep the fruits of one’s labor. That was then .... do we still hold to that principle?  Or, does our government see its role as making us all be the same, and leveling the playing field, regardless of efforts and accountability?
It seems to me that Government is increasingly deciding which rights people and groups are "endowed" with.  And if they are the "giver", then they reason that they can also take those rights away.  Hence, our property rights are no longer sacred nor protected.  In fact, the "natural" rights that our Founding Fathers so authoritatively manifested have been redefined as government-guaranteed economic opportunity and security.
I truly believe that the group of men who convened in July of 1776, were Divinely-inspired.  For the first time in history, the idea was born that men could be free of the restraints that repressed them. But the Founding Fathers understood that men were not perfectly good so they needed to form some sort of government to secure their natural rights. But just as important, they needed a government constrained by the consent of the people.  James Madison expressed it eloquently:  "If men were angels, no government would be necessary."
But they also new that this never-before-tried form of government would be fragile and subject to corruption.  That's why, at the close of the Constitutional Convention of 1787, when asked if the Founders had crafted a Monarchy or a Republic, Benjamin Franklin replied, "A republic.  If you can keep it."  And my, how difficult it has been to keep it!  Down through the nearly two-and-a-half centuries this country has existed, malevolent forces have battered our walls of freedom.  The Republic has managed to survive threats from Communism, Socialism and Progressivism; although all have managed to erode the original vision of those inspired men.
If you can keep it .... Did they know we would let it slip away?  But could they also conceive that there would be those of us who would recognize that what they accomplished was worthy of fighting for; and that their vision would still burn in the hearts of patriotic souls?  I think Franklin's reply was a subtle warning ... our freedom was not, and is not, guaranteed.  The Founders knew that men and governments would endeavor to increase their power and control at the expense of our individual freedoms because freedom is not the natural state of the world.
That's why President Ronald Reagan's words sound so prophetic today:  "[Freedom] must be fought for, protected, and handed on [to our children] for them to do the same, or one day we will spend our sunset years telling our children and our children’s children what it was once like in the United States where men were free."
How do we protect these fragile freedoms; these freedoms that we are on the verge of losing today?  Has this erosion occurred by "the consent of the governed"?   We certainly seem to have fallen asleep on the job.   How do we change direction, and is it too late?  There are many Americans who would tell you that we failed Benjamin Franklin -- that we've lost it.  I refuse to believe that!  As Reagan eluded to, we must reinvigorate ourselves; know how remarkable and rare are this country's founding principles and teach that fact to our children.  Then we must make sure that we take advantage of the extraordinary system that has been instituted and elect honorable men who will preserve those principles.
We must return to being a moral nation; not adopting moral relevancy, but a moral code of conduct that breeds responsibility, accountability, and recognizing the rights of others.  Finally, we must renew our efforts as watchmen of our freedoms; guard them and fight for them.  If we cannot return to a knowledge and recognition of the unparalleled freedoms that were established in this country, as well as stand up as moral men and women, and vow to protect our rights, then I'm afraid we may have nothing to celebrate next Fourth of July.
But, if, as I suspect, the "Spirit of '76" still exists in our DNA, then I set my sights on the day that we can once again proclaim, as did Oliver Wolcott, a signer of the Declaration of Independence 238 years ago today, "It is most evident that this land is under the protection of the Almighty, and that we shall be saved not by our wisdom nor by our might, but by the Lord of Host Who is wonderful in counsel and Almighty in all His operations."  Amen!