It's not as if we here in the United States don't have enough to worry about ... a porous and dangerous southern border; a dying economy; political turmoil; a divided populace; and rising prices on everything across the board... but we must now keep an eye on events in the Middle East, too.
Right now, the troubles may seem localized, but one need only look at a map of the Middle East to see that the fate of the small country of Jordan could cause repercussions around the world.  That has become even more evident this week as the Israeli website, Debka File, published a report that pro-ISIS protests are gaining in popularity in the city of Ma'an, the capital of the southern province of the Kingdom of Jordan. 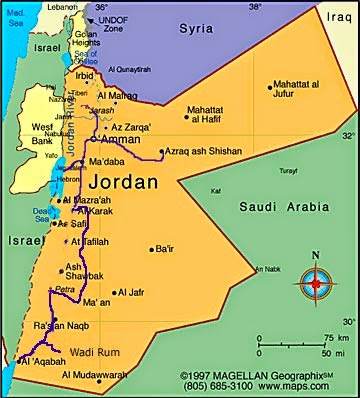 The report states that for now, King Abdullah is conferring urgently with his army and intelligence chiefs on how to suppress the Islamist revolt in Ma’an without it spilling over into other Jordanian towns, especially Salt, Irbid and Zerka, which have large clusters of Al Qaeda followers.  This will be quite a task for Jordan's military, since it faces additional ISIS-related threats from Syria to its north, and Iraq to its east.
And, of course, the big elephant in the room is Saudi Arabia.  Situated to the south of Jordan, we must really ask, Where do their loyalties lie?  Are they indirectly involved in this whole ISIS movement?  Smarter people than me will have to educate you on this puzzle, but it doesn't take a genius to figure out there are underlying alliances going on, and everyone is looking out for themselves.
But back to Jordan.  Its military is divided into three sectors: two are protecting the Syrian and Iraqi borders, with the third protecting the capital city of Amman.  Should the Islamist protests spread from the southern town of Ma’an to other corners of the kingdom, it is obvious that the army will be short of fighting manpower for simultaneous defense against internal and external threats.
But while the fate of Jordan lies in the balance, its destiny is closely tied to that of Israel.  Currently, Jordan seems to be the only country in the middle East that expresses any desire to honor its peace treaty with Israel.  In effect, Jordan is an important buffer zone (literally and figuratively) between Israel and those countries who have sworn to destroy her.  And that's why the U.S. has continued to spend millions of dollars in annual foreign aid for Jordan.  And let's not forget that we also have troops and military equipment stationed there.
As reported by Debka File, Brig. Gen. Dennis McKean, commander of the joint US-Jordanian-Israeli underground Centcom-Forward war room established near Amman, has already received instructions to place the 12,000 U.S. soldiers and USAF  F-16 fighter squadron (positioned in Jordan) on the ready.  Debka File further discloses that McKean is in direct communication with Israeli military commanders to consider how to proceed, should Israel feel openly threatened.  (Add in the recent escalating violence between Israel and the Palestinians over the deaths of three innocent schoolboys, and the situation threatens to spiral out of control).  Do they wait for the threats to escalate?  Or do they strike preemptively, and how will this effect Jordan's internal security?
I am reminded of the role that the small country of Serbia played in the outbreak of WWI.  History records that a so-called Serbian freedom fighter assassinated "occupier" Archduke Franz Ferdinand, the Austro-Hungarian crown prince.  This began a series of alliances between Europe’s major powers, and resulted in them being dragged into fighting an unimaginably bloody conflict that led to the slaughter of 16 million people.
If Jordan collapses under the multi-front assault, will we see a series of alliances that will unleash an unholy war upon the nation of Israel?  Could this be the tipping point for WWIII?  And will the imminent destruction of Israel be the deciding factor that sees the return of Jesus Christ?  I don't have any of the answers, but I have enough discernment to ask the question, Is this what the prophet Isaiah was referring to when he said, "The kings of the earth set themselves, and the rulers take counsel together, against the LORD, and against his anointed"?  The prophet goes on to say that God will laugh at the rage of the heathens and He will say, "I set my king upon my holy hill of Zion."
Make no mistake, whatever any of the rulers in the Middle East, or around the world, may plan, God makes it plain that He will not suffer the destruction of His people in His holy land; God  intends to set the Lord Jesus Christ up as King over the earth.  Will these menacing threats aimed at Jordan trigger His judgment and usher in His promised Kingdom?  The pot is boiling harder and the clock is ticking faster.  What we see happening in the Middle East in the coming days could very well determine the future of this world.   Time is running short!