Aren't You Glad Your Money Is Supporting This?

Did you know that nearly half of the abortion industry giant Planned Parenthood's budget is derived from taxpayers?  Or did you know that at least a portion of the additional $75 million per year Obamacare appropriates for “sex counseling” through the Personal Responsibility Education Program (PREP) will also go to Planned Parenthood(PP)?  That's what Breitbart.com reports in an extremely disturbing article, titled "Planned Parenthood:  Girls Experiment With Getting 'Spanked', 'Whipped", or 'Hit' ".
I have long tried to ring the bell against the foundational principles of Planned Parenthood and its heroes, such as Margaret Sanger.  But the latest revelations are beyond horrific!  The ramifications for our society spell certain doom.  The Breitbart article references a group called Live Action, which is a pro-life group that is exposing Planned Parenthood's dangerous "counseling" practices to young teen women.  Live Action sent in an undercover investigator, posing as a 15-year-old girl asking for information on sexual practices.  I urge you to watch the video, but caution you that it will make your stomach turn.  This particular video shows PP staffers in Oregon advising this young girl "that it’s very common to experiment with different things," including "being tied up" and "whipped" and doing "the baby thing, where they will put on diapers." 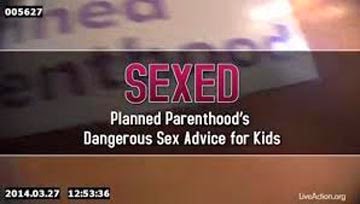 Other videos show PP staffers in Indianapolis "giving advice to an undercover investigator on how to engage in bondage/discipline and sadomasochistic sex (BDSM), in addition to accessing sex shops and pornographic websites."  Breitbart also provides info on the Denver PP office "offering suggestions, in graphic detail, of a spectrum of sadistic sexual behaviors, including 'whipping,' 'tying up,' and 'asphyxiation'. "  And my taxpayer dollars are supporting this filth!?!
Oh, but I'm not finished yet!  Planned Parenthood's involvement with PREP proclaims that the program is “the first federal funding stream for programs that teach about abstinence and contraception for the prevention of pregnancy and sexually transmitted infections (STIs).”  You might think that sounds positive, but read on .... “These programs censor vital information from young people, who have the right to complete, accurate information that will allow them to make informed decisions about their sexual health.”   And I'm assuming that PP and PREP think that young girls need to be informed about sado-masochism, right?
Is anyone else outraged that Planned Parenthood receives over $500 million annually of taxpayer funds to distribute this kind of toxic and aberrant sexual ideology?  There is absolutely no socially redeeming benefits for disseminating this vile instruction!
I whole-heartedly agree with Lila Rose, President of Live Action:  "Whether you're liberal or conservative, or even pro-life or pro-abortion, tax-funded 'counseling' sessions directing kids to porn sites and sex shops, and teaching them how to beat and choke each other, are completely unacceptable."  Has Satan completely pervaded our government, our society and our moral sensibilities?  Please, God, protect this generation of young people who are being deceived.  This spiritual battle is Yours to win; we have failed miserably.

1 Thessalonians 4:3-5    "For this is the will of God, your sanctification: that you abstain from sexual immorality; that each one of you know how to control his own body in holiness and honor, not in the passion of lust like the Gentiles who do not know God;"

Email ThisBlogThis!Share to TwitterShare to FacebookShare to Pinterest
Labels: Abortion, Education, Our Youth