Ebola: The World On Alert

The word alone is enough to strike fear in the hearts of every person on earth ... Ebola.  It used to be the farfetched, but frightening, epidemic that novels and movies employed to scare the bejesus out of us.  It was the most excruciating death that writers and film-makers could imagine, and their depictions were always graphic and horrifying.
Now, the disease has become reality.  We've known for some time that the disease was real and active; but it was a continent away in Africa.  We tried to pretend "out of sight, out of mind."  But the death toll is climbing, and more and more news sources are reporting on it.  When The Washington Post runs a headline that says, "This Is The Worst Ebola Outbreak In History.  Here's Why You Should Be Worried," well .... it tends to make you take notice. 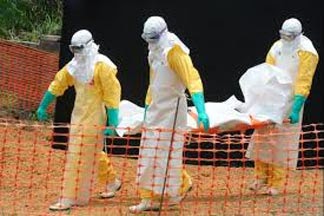 Although the 670 deaths (so far) in West Africa from Ebola is quite alarming, I believe there was hope that it could be contained.  Now, that hope is taking a serious hit.  There were several incidents this past weekend that has the world on edge.  Nigeria became the latest country to report a death from the virus.  Then a woman in the capital city of Freetown, Sierra Leone also died, and a distinguished doctor in Liberia, Samuel Brisbane, died after fighting the disease for several weeks.  But he wasn't the only one in Liberia to come under the curse of this deadly illness.
A U.S. doctor and a health worker, both associated with Samaritan's Purse, a charitable organization, have both been reported as contracting the disease and are under medical care in Liberia.  Plus a Liberian Finance Ministry employee, with a family here in the U.S., began suffering the effects of Ebola while en route from Liberia to a conference in Nigeria.  Although he was quarantined after arriving on his flight to Liberia, he later died.  Just how many people could have been infected is unknown.
These events over the last few days point to the very real possibility that there could be a world-wide epidemic.  And there is real cause for concern.  Here are just a couple of facts from the Wikipedia description of Ebola:  There is no specific treatment for the virus.  Common efforts to help people include giving the person either oral rehydration therapy or intravenous fluids.  The disease has a high death rate: often between 50% and 90%.  Efforts are ongoing to develop a vaccine; however, none exists as of 2014.  That's all I need to know, to discern that this is a very real threat.
Although airline flights are being suspended and border crossings are being monitored, no one knows if the virus has already been spread to unwitting carriers.  The wife of the Liberian government employee reported that her husband was planning a return trip to the U.S. in August to celebrate his daughters’ birthdays.  World Net Daily reported that Patrick Sawyer's wife, Decontee, told her local newspaper,  “Patrick was coming here.  What if he still wasn’t displaying symptoms yet and came?”  In a TV interview with her local news station KSTP in Minneapolis, MN, she related, “It’s a global problem, because Patrick could’ve easily come home with Ebola. Easy. Easy. It’s close, it’s at our front door. It knocked down my front door.” 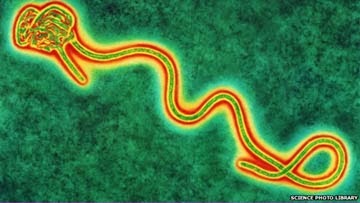 And her fear is warranted.  In that same WND article, the CDC tell us,  “Early symptoms of the disease include … sudden fever, chills and muscle aches.  Around the fifth day after onset of symptoms, a skin rash can occur. Nausea, vomiting, chest pain, a sore throat, abdominal pain and diarrhea may follow. Symptoms become increasingly severe and may include jaundice, severe weight loss, mental confusion, shock and multi-organ failure.”  Apparently, the incubation period for the disease can be between two and 21 days before symptoms appear, and doctors with the CDC want us to believe that the disease is not contagious unless symptoms are present.  Are you willing to trust them?  Can they guarantee us that a victim is not contagious until the symptoms occur?  And those early symptoms sound an awful lot like a lot of other benign illnesses.
But here is what has me on red alert:  In the WND article, Dr. Stephan Monroe, the deputy director of CDC National Center for Emerging & Zoonotic Diseases, told reporters yesterday that even if a case did show up in the U.S., he expects it would be contained by the basic practices of Western medicine.  “We’re confident the standard care of U.S. [hospitals] would prevent much of the transmission should a case show up here."  Need I remind you that antibiotic resistance and mutation rates have contributed to an alarming number of Staph and MRSA-related deaths in hospital settings?  I know, because my mother died of a staph infection after knee-replacement surgery.  I agree with Dr. Monroe that our U.S. hospitals and procedures stand a better chance of eliminating the spread of Ebola once patients are admitted to the hospital.  But no one can predict how quickly and stealthily this lethal virus could spread, before patients start showing up at Emergency Rooms.  What if it creeps into our country undetected?
Can you think of a better way to wreak havoc upon this nation that to introduce an Ebola-infected illegal alien across our southern border?  With buses of people being shipped all over the country, it doesn't take a genius to see how rapidly this virus could become a fatal epidemic.  The CDC is cautioning against fear and misinformation.  They are correct in that Ebola cannot yet be classified as an epidemic.  But its reach is getting longer and I believe that we could become vulnerable to an outbreak, whether accidental or intentional.  I pray that this deadly virus, with no cure, does not reach our shores, and it is not the personification of the Fourth Rider of the Apocolypse...