The Mind of Our Military Is At Risk! 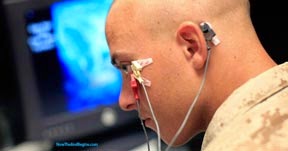 In the wake of the VA Hospital scandal, it's not as if our soldiers don't have enough to worry about when it comes to their medical treatment.  Now The End Begins website recently printed an article that will have you scurrying for the biggest tin-foil hat you can find.  They report that "under the guise of treating the all-covering diagnosis of PTSD, the Obama administration has instructed the Pentagon to begin the process of microchipping the brains of soldiers. Watch for diagnosis of PTSD to increase 1000% past the current all-time high to justify mass microchipping."
Wow!  Did the hair just stand up on the back of your neck?  But we shouldn't be surprised.  After all, I'm sure you knew that Obamacare made plenty of provision for “implantable devices”, and not just for pacemakers.  You knew that, right?  Remember, we have been hearing about RFID chips for some time now, and how they will "streamline" all of our outdated processes.  We can keep better track of our kids while they are at school; help monitor our elderly to make sure they are taking their medications properly; heck, we are even considering microchipping our bank accounts in our hands, so that just a swipe across that scanner will take care of business.
Why would we object?  Don't we already microchip our pets?  Now, Defense One, a site that offers breaking news and analysis about defense, foreign policy and national security, reports that the Pentagon is developing a new, innovative brain chip to treat PTSD in soldiers and veterans that could bring sweeping new changes to the way depression and anxiety is treated for millions of Americans.  With $12 million (and the potential for $26 million more if benchmarks are met), the Defense Advanced Research Projects Agency, or DARPA, wants to reach deep into your brain’s soft tissue to record, predict and possibly treat anxiety, depression and other maladies of mood and mind.   Does anyone else see the vast possibilities for misuse of such a device?  And who wants the government being able to "treat" your brain?
There will always be those who are looking for the "magic pill", or in this case, the magic cybernetic electrode that implants into the brain.  They make it all sound so .... brilliant.  “DARPA is looking for ways to characterize which regions come into play for different conditions – measured from brain networks down to the single neuron level – and develop therapeutic devices that can record activity, deliver targeted stimulation, and most importantly, automatically adjust therapy as the brain itself changes,” DARPA program manager Justin Sanchez said.
That's my point!  They are changing the brain!  We have already seen how certain mind-altering drugs can influence aberrant behavior.  Now the government wants to "deliver targeted stimulation"?  Do you trust that it will be only for the good of the patient?  This is the kind of stuff evil scientists come up with to gain mind-control over their subjects!  And I can't help but remember the effects of electric shock therapy on a beloved aunt who suffered from depression and anxiety.  How is this any different?  "Targeted" and "electric stimulation" is the same, no matter what name you call it!
Here's another thought ... in the end, there is something that is manifestly wrong with trying to control the brain.  For a long time now, scientists have tried to discover if there is a "God spot" hidden deep within the brain; an area where we identify with the One who created us, and where we recognize His worth.  The research has revealed that a belief in God is deeply embedded in the human brain, which is programmed for religious experiences.  And according to a study by the US National Institute of Neurological Disorders and Stroke, "Religious belief and behavior are a hallmark of human life, with no accepted animal equivalent, and found in all cultures."
Soooo, if you were say, Satan, and you wanted to eradicate any concept or thought of God, wouldn't it be to your benefit to introduce through your ever-expanding technological advances, a method by which you could cut open the skull and put one or more wires deep inside and turn off that neuron receptacle?  Or at least "adjust" it?  And think of the implications of an entire military with microchips that can be "targeted", "stimulated", or simply shut down?
We are treading on dangerous ground here!  I just pray that our military personnel are wise enough to resist the manipulation and false promises they are about to receive.  This is Scary Science at its best, and the Devil at his most diabolical.

Colossians 2:8    "See to it that no one takes you captive by philosophy and empty deceit, according to human tradition, according to the elemental spirits of the world, and not according to Christ."