Are We That Far Behind?

If, as Americans, we were honest with ourselves, I think we would find that as we have attempted to become more "tolerant", the overall repercussions have been a disintegration and deterioration of the fabric of our society.  Does that mean that a bigoted, exclusive and insensitive people is preferred?  Absolutely not!  But there needs to be a balance between respecting our differences and allowing the destruction of our culture in the name of "acceptance". 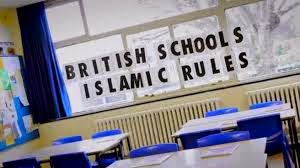 I am saying all this because of a disturbing trend that is taking place in Britain, and which has the possibility of becoming a problem for us, too.  I found it very interesting when CBN News reported that "the British government has announced that schools will be required to teach British values."  Why make that distinction and what brought this on?  Apparently, this new policy came about in the wake of news that Islamists took over several schools in the United Kingdom. This alleged plot to turn British faith-based schools into Muslim training academies has been dubbed "Operation Trojan Horse."
British Islamic expert George Igler is quoted as saying, "Individuals with a religious motivation have taken public money and basically created madrases; basically created religiously motivated schools that promote intolerance, and this in some cases is a criminal enterprise."  The school policy  decision comes at a time when Britain was already in an uproar over the explosion of Muslim halal food in the nation's food supply, and after revelations that several predominantly Muslim sex gangs around Britain were using English girls as sex slaves.
Another aspect of this development is that Britain is the only Western country with a functioning network of Sharia tribunals and councils.  There are over 100 Sharia courts in Britain, and they are dealing with marriages, divorce, even with criminal matters. They're also marrying children!
In Birmingham, England, with its large Muslim population, authorities say Islamists were turning schools into centers of extremism.  And in one school the Muslim call to prayer was broadcast across the school playground, and non-Muslim teachers were forced out. 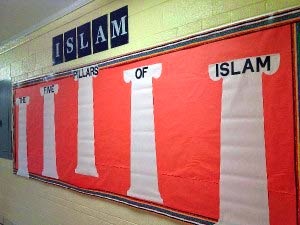 I bring this to your attention because if you think it can't happen here, think again!  Todd Starnes, at Fox News, reported that parents at a Wichita, Kansas elementary school were shocked to discover a giant wall display inside the building promoting the five pillars of Islam.  The exhibit was part of a religion component being taught at Minneha Core Knowledge Magnet School.  School officials said the study of Islam is part of their “Core Knowledge” magnet curriculum, and if you've been reading my blog for awhile, I don't have to point out that anytime you see the word "Core" in a school curriculum, you better be looking for Common Core, the federally funded education curriculum -- which includes many studies on the religion of Islam, by the way.  Supposedly, the "Core Knowledge" purpose is not to explore the matters of theology, but to understand the place of religion and religious ideas in history.  But that begs the obvious question ... If the purpose was not to teach theology, why was the school teaching the five pillars of Islam?
Then there's the issue of the Sharia courts.  According to an article in The Washington Times, Islam’s sharia law is insinuating itself into our courtrooms, schools, prisons and every other aspect of society. The lever often used is one of discrimination against the precepts of shariah, while Christian and Jewish customs and laws remain.  In a 2011 report, the Center for Security Policy found 50 “significant” published appellate court cases where sharia law entered a U.S. court’s decision making.  Among those cases are the following:
•  The Muslim Students’ Association and the Muslim Accommodations Task Force has convinced at least 17 universities to have foot baths built or under construction, including Boston University, George Washington University and Temple University, and at least nine universities have prayer rooms for “Muslim students only,” including Stanford, Emory and the University of Virginia, according to USA Today.
•  Illinois’ Skokie School Districts replaced Veteran’s Day with Eid ul Adha, a major Muslim holiday, in 2013.
•  In Ohio, a Muslim death row inmate, Abdul Awkal, has filed a federal lawsuit arguing the prison system’s failure to provide halal meals is a restraint on his religious freedoms. His on-going case already succeeded in having pork removed from the prison system’s menu.
In each of these cases, intimidation and threats of lawsuits forced U.S. laws and customs to give way to sharia law.  In the face of this pressure, we must admit the facts as the British have now figured out, and as Omar Ahmad, co-founder/Board Chairman of Council on American Islamic Relations (CAIR), in 1998 said publicly, “Islam isn’t in America to be equal to any other faith, but to become dominant. The Koran should be the highest authority in America, and Islam the only accepted religion on Earth.”
Is it too late for Britain?  Michael Gove, British secretary of state for education, told parliament that British schools must be put under new leadership, and taken in a fresh, new direction.  "And we will put the promotion of British values at the heart of what every school has to deliver for children."
Will America learn from Britain's failing "tolerance" policy?  Will we listen to the wise words of our Founding Fathers, who themselves confronted the differences between the two religions?  John Adams wrote a 4-page letter after he and Thomas Jefferson met with the emissary of the Islamic potentates of Tripoli to Britain, regarding the Barbary Pirates’ demands for tribute.  In the letter he made this observation:  "We took the liberty to make some inquiries concerning the grounds of their pretentions to make war upon nations who had done them no injury, and observed that we considered all mankind as our friends who had done us no wrong, nor had given us any provocation.  The Ambassador answered us that it was founded on the laws of their prophet, that it was written in their Qur’an, that all nations who should not have acknowledged their authority were sinners, that it was their right and duty to make war upon them wherever they could be found, and to make slaves of all they could take as prisoners, and that every Muslim who should be slain in battle was sure to go to Paradise."
Just as the foundational principles of our Christian faith have not changed in a couple of thousand years, neither have those of the Islamic faith.  The threat to Great Britain is real and it has progressed to the point that they must push back or risk losing their culture.  So, I ask the question presented by this post ... Are we that far behind?  I have listed only a couple of examples of where we have "bowed down" to the tenets of Islam and forsaken our own laws, traditions and faith.  Do we really think if we show a good faith gesture of tolerance that we will still be allowed to honor and glorify our God?  It is time we pull our heads out of both the clouds and the sand, and stare the truth in the face.  If we don't want to follow in Britain's footsteps, then we better decide to know what Islam really is and how we are going to protect our own values.  Our schools and our courts are already under attack.  We better pay close attention!