Evil Is On the March 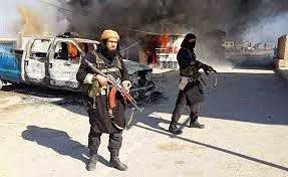 As I write this, it is the afternoon of June 12th, 2014 and I am experiencing an overwhelming sense of futility and sadness as I reflect on the news coming out of Iraq.  The Daily Mail out of Britain has an in-depth article on the collapse of the city of Mosul. Combine that with the more recent fall of Tikrit, and the imminent assault on Baghdad, and it is quite clear that the war in Iraq is not over. While the photos show the heartbreak of families fleeing the brutal insurgency of a new terrorist group, ISIS (Islamic State of Iraq and Syria), I cannot help but think about the tremendous cost in lives and treasure.
Reuters has reported that the U.S. war in Iraq has cost $1.7 trillion with an additional $490 billion in benefits owed to war veterans; these are expenses that could grow to more than $6 trillion over the next four decades counting interest.  But worth more than these overwhelming figures is the cost in human lives.  A total of 4,486 U.S. soldiers were killed in Iraq between 2003 and 2012.  University researchers in the U.S., Canada and Baghdad, along with the Iraqi Ministry of Health, have estimated that nearly half a million people in the country of Iraq have died since the U.S.-led invasion in 2003.  These figures cover not only violent deaths, but other avoidable deaths linked to the invasion, insurgencies and subsequent social breakdown.
So what happens now?  As trite as it sounds, only the Lord knows.  ISIS is not a name I was familiar with, but preliminary research has shown that they are so brutal, that even Al-Queda shuns them.  One headline announced the depth of their evil cruelty .... Marauding ISIS Militia Beheading Their Way to Baghdad.  What makes this group so frightening (and why Al-Queda has distanced themselves) is that these beheadings, crucifixions, and assassinations have been carried out against rival jihadist groups.  This all comes as the leader of this brutal group continues to attract hardline Islamic fighters from around the world.  Reports say that ISIS has in excess of 10,000 fighting men in its ranks. Many of its fighters are thought to be radicalized Western Muslims who have poured in from Europe and North America to join the fighting in Syria and elsewhere in the middle East. 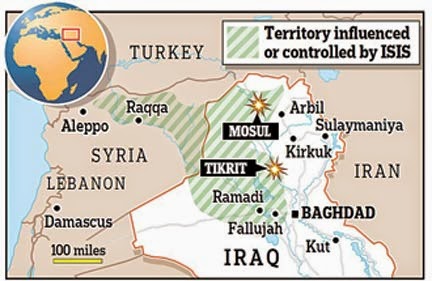 ISIS is being led by a shadowy figure known as Abu Bakr al-Baghdadi.  You can imagine my alarm when I heard retired U.S. Army Lt. Colonel Ralph Peters compare Osama bin Laden to John the Baptist, as the forerunner to this al-Baghdadi.  Are we looking at the emergence of an archetype of the Islamic Savior known as the Mahdi? Will he be able to unite the jihadists around the world and bring on another holocaust of God's people?  He has certainly manifested himself as a brutal power in a very rapid manner, and one cannot help but look back at history at the other representatives of Evil who appeared in similar circumstances.
The news agencies spell out the danger that threatens to engulf the entire globe.  Reuters says, "Sunni rebels from an al Qaeda splinter group overran the Iraqi city of Tikrit on Wednesday and closed in on the biggest oil refinery in the country, making further gains in their rapid military advance against the Shi'ite-led government in Baghdad."  Over half a million people fled the city of Mosul in the wake of that conquest.  And for those of us who see the headlines from a biblical perspective, we cannot dismiss the words of a police captain who fled the city of Tikrit, "We are fighting devils and not ordinary people".
But I have to tell you that I think there is even more Biblical significance to what is happening.  The Christian Science Monitor reports that "It's well known that Mosul has been a target for ISIS... the city is the capital of northern Nineveh Province."  Now where have we heard that name Nineveh before?  Genesis 10:11 records that none other than Nimrod built the city of Nineveh.  And if you don't know who Nimrod is, well just suffice it to say that the root meaning of Nimrod in the Hebrew language is "the rebel".   And it is very possible that “Nimrod” may not be the name of an actual man, but is more likely a derisive term of a type, or a representative, of a system that is epitomized in rebellion against the Creator, the one true God.  We can identify his "type" throughout history in the personages of Antiochus Epiphanes, Gengis Khan, Stalin, and Hitler, amongst many others.
It is also important that the city of Nineveh and the city of Babylon are closely tied together as Nimrod's power bases.  And would it surprise you to know that the ruins of ancient Babylon sit just 53 miles south of modern-day Baghdad?  There are those who will scoff at my implications, but the fact that the conquest of Iraq is happening so quickly in the wake of the more than $14 billion we spent in training Iraqi forces to defend themselves, cannot be easily dismissed.  I cannot disregard the ancient prophecy in Jeremiah 51:7-8:  "Babylon has been a golden cup in the hand of the LORD, intoxicating all the earth. The nations have drunk of her wine; Therefore the nations are going mad. Suddenly Babylon has fallen and been broken...".  This corresponds with the End Times prophecy in Revelation 18:10 that foretells the fall of Babylon in one hour.  For the skeptics that will tell me Baghdad is not Babylon, I would say, the spirit of ancient prophecies rest upon this land, as well as future pronouncements regarding the End Times.  We would do well to pray for our deliverance from the consequences.
And to those of you who do not see these world events through the lens of the Bible, I must tell you that I cannot see them otherwise.  It is my hope that the urgency of what is being reported would cause you to check out my assumptions; to examine the Bible yourself to see if it bears witness to what I suggest.  These events could have immediate effect upon all our lives through the takeover of strategic oil fields in Iraq, along with the possibility that any number of the North America jihadists lining up with ISIS might hold U.S. passports.  At the very least your comfortable American life might be headed for some serious and far-reaching changes.  But at the heart of my post is the hope that you will recognize that, most importantly, it is your eternal life that is in jeopardy.  Evil is obviously sweeping the Middle East, and why would it stop its campaign for world dominance at the borders of Iraq?  Now is the time to make preparations for your soul.

I Thessalonians 5:3    While people are saying, "There is peace and security," then sudden destruction will come upon them as labor pains come upon a pregnant woman, and they will not escape.