Social Commentary: When Does It Stop?

I have been slightly amused over the cacophony of voices lamenting the offensive use of "Redskins" when referring to a particular football team.  I say "slightly", because at the root of all this commotion is the breakdown of a culture that has become so self-centered, everything offends them.
I am not saying that there are not legitimate reasons to take offense when language is used to intentionally cause harm or damage to an individual or group of people.  I think we can all agree that whenever words are calculatingly and consciously designed to cause suffering, then it's not OK.  Common sense dictates this perspective.
But it has become increasingly acceptable to try to limit someone's speech (if one doesn't agree with it), by raising the ante and accusing them of an even greater offense.  Take this for instance:  It is quite apparent that so-called comedian Russell Brand doesn't agree with Fox News host Judge Jeanine Pirro's assessment of our options in dealing with the growing ISIS insurgency in Iraq.  To be completely honest, I'm not sure how I feel about her analysis either.  She further identified ISIS to be, in her opinion, “a fanatical religious terrorist organization.”  But this is still a nation where we can voice our various opinions, and agree to disagree, right? 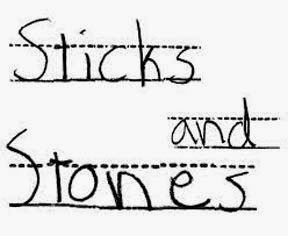 Well, simply disagreeing is not enough for Mr. Brand.  He found Ms. Pirro's remarks offensive, so he felt obliged to deliver a nearly 10-minute YouTube rant, calling Fox News a "fanatical terrorist propagandist organization" and calling Judge Jeanine "a savage", and calling her choice of words "invective, just incendiary language, just volatile combative, angry language. That – I’m not being sensational – that is more dangerous than ISIS."
So, let's step back from this diatribe for a moment.  On the one hand, you have a woman who offers her personal opinion (for which she has been hired) about a very serious situation.  Agree or disagree with her evaluation, it is just that ... her judgment of the situation and the perpetrators.  Then you have an unrelated third party, who decides he doesn't agree with her opinion, but it's now OK to personally attack her.  Somehow, her words, which had nothing to do with him, have become personally offensive to him.  Why could he not have issued a counter statement presenting his own opinion on the subject?  Why does he feel that a different opinion gives him the right to claim an aggravated insult, and subsequently give him permission to issue his own offensive language?  And her words were more dangerous than chopping off heads?  Really?!?  Perhaps, Mr. Brand, you'd like to have a personal exchange with both of them and see which one causes you more suffering.
I hate to refer to childhood axioms, but what happened to "Two wrongs don't make a right" and "Sticks and stones may break my bones, but words can never hurt me"?  Yet again, maybe "childish" is the perfect characterization of this trend.  Have we become so self-absorbed and egocentric that everything revolves around our feelings, our views, our pride?  Whatever happened to rising above it all?  Only you can let words harm you.  And I find it curious that third parties are suddenly feeling offended on behalf of other parties, often creating disharmony where there was none.
Are there words that may not be polite, or can be less than pleasant; even repulsive?  Of course!  But if we start reacting to every syllable that annoys us or that we don't like, how long before every business comes under scrutiny?  How long before our courts are clogged with endless lawsuits?  How long before everybody is offended by something?  Our culture certainly seems confused to me ... TOLERANCE is supposed to be the culture's slogan; but apparently it's a one-way street, and being offended is the new entitlement.

James 1:19    "Know this, my dear brothers and sisters: everyone should be quick to listen, slow to speak, and slow to grow angry."
Posted by Pam Kohler at 7:00 AM