I must admit that I am mildly surprised at the recent decisions by the Supreme Court.  Although I am still skeptical that the Constitution has more influence than Politics in their recent determinations, I sense at least an attempt to fulfill their Judicial obligation in the governing of this nation.
It's actually very simple.  The Supreme Court's primary role is to interpret the Constitution.  In essence, they interpret the meaning of laws, and oftentimes determine what national policy will be when it applies law to specific disputes.   And that's where Politics often takes precedence.  After all, it is the goal of each incoming President to appoint Justices that will support his political agenda.  It then remains to be seen to whom these supreme lawyers of the land owe their allegiance ... the man and the culture, or the Constitution. 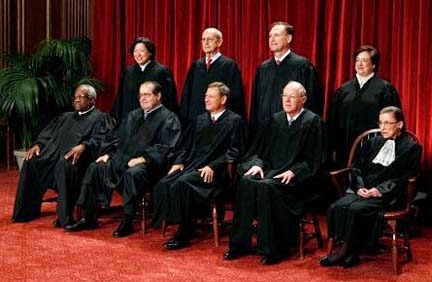 This week at least, SCOTUS seems to have kept their eyes on the fundamental principles of our Founding document.  First up, and in an astonishingly unanimous ruling, the Court announced that police may not generally search the cellphones of people they arrest without first getting search warrants.  In writing his opinion, Chief Justice John Roberts said, “Modern cellphones, as a category, implicate privacy concerns far beyond those implicated by the search of a cigarette pack, a wallet or a purse. A conclusion that inspecting the contents of an arrestee’s pockets works no substantial additional intrusion on privacy beyond the arrest itself may make sense as applied to physical items, but any extension of that reasoning to digital data has to rest on its own bottom."
Roberts further stated that cell phones bear little resemblance to the type of brief physical search that is common during an arrest; due to their storage capabilities, they are actually mini-computers.  While I applaud this securing of our Fourth Amendment right of undue search and seizure, I'm not entirely comfortable that Roberts wrote that law enforcement could seize and secure a cellphone until a warrant is obtained to search its contents, should they (law enforcement) fear destruction of evidence.  How easy will that be to allege?  But at least we now know to insist on a warrant before turning over our cell phones.
Secondly, in a stunning decision for a politically-split Court, SCOTUS's first case involving the Constitution’s recess appointments clause ended in a unanimous decision holding that President Obama’s appointments to the National Labor Relations Board in 2012, without Senate confirmation, were illegal.  The President invoked the Constitution’s provision giving the president the power to make temporary appointments when the Senate is in recess.
Justice Stephen Breyer said in his majority opinion that a congressional break has to last at least 10 days to be considered a recess under the Constitution.  In effect, they rejected the President's argument that the Senate was on an extended holiday break and that the brief sessions it held every three days – what lawmakers call “pro forma” – were a sham that was intended to prevent him from filling seats on the NLRB.
The Constitution requires that the Senate and House must get the other’s consent for a break lasting longer than three days.  Recess appointments are nothing new; both Presidents Bush and Clinton took advantage of this Constitutional clause.  But Obama was the first president to try to make recess appointments when Congress explicitly said it was not in recess.  This ruling appears to institute a return to the governing rules of the Constitution.
Then there was the decision that extending a buffer zone 35 feet from abortion clinic entrances violates the First Amendment rights of protesters.  The Justices were unanimous in their decision.  However, The Boston Globe reports that while the court was unanimous in the outcome, Chief Justice Roberts joined with the four liberal justices to strike down the buffer zone on narrow grounds. In a separate opinion, Justice Antonin Scalia criticized Roberts’ opinion for carrying forward ‘‘this court’s practice of giving abortion-rights advocates a pass when it comes to suppressing the free-speech rights of their opponents.’’
The case began when Boston-area grandmother Eleanor McCullen and other abortion opponents sued over the limits on their activities at Planned Parenthood health centers in Boston, Springfield and Worcester, Massachusetts.  Mark Rienzi, who represented the protesters at the Supreme Court, said, ‘‘The government cannot reserve its public sidewalks for Planned Parenthood, as if their message is the only one women should be allowed to hear. Today’s decision confirms that the First Amendment is for everyone, and that the government cannot silence peaceful speakers. That result is good news for Eleanor McCullen, and it is great news for the women she helps.’’  I agree!
Of course, all eyes are on the expected decision next week on the Hobby Lobby case.  The question this case is seeking to solve is whether for-profit companies have a right to exercise religious freedom under the Religious Freedom Restoration Act, a federal law passed in 1993 that states the “Government shall not substantially burden a person’s exercise of religion even if the burden results from a rule of general applicability."
At the heart of Hobby Lobby's case is their owner's contention that their "religious beliefs prohibit them from providing health coverage for contraceptive drugs and devices that end human life after conception." Because of the religious nature of Hobby Lobby's business, they assert that they are entitled to a religious freedom exemption from the Affordable Care Act's mandate because of the Religious Freedom Restoration Act — the same exemption that has been afforded to nonprofits with a religious nature.
Whatever the Court decides, it will most probably not decide the fate of the Affordable Care Act as a whole.  But it would be a step towards protecting religious Americans from the pressure of an autocratic government.  I hope they make the right decision.  For me, God's law always trumps man's law.  We will see.

Acts 5:29     But Peter and the apostles answered and said, "We must obey God rather than men."