The Donald Sterling Mess: Moral Relativism In The Spotlight 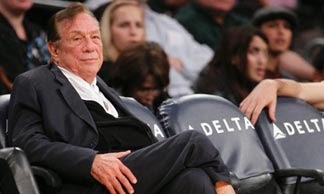 I do not know of one single person who is not offended at the horrific, racist remarks of LA Clippers owner, Donald Sterling.  He has received a lifetime ban from the sport of basketball, a $2.5 million fine, and the likely forced sale of his ownership in the team.  Does his offensive speech demand the extent of his punishment?  Certainly, his racist and illegal housing policies over the years have violated numerous laws under the Fair Housing Act.  The lawsuits were well-known among the National Basketball Association and African-American players.  So without discounting or dismissing his latest verbal rant, I'd like to know why we heard no League-wide condemnation against him for discriminating against minority tenants?  The lawsuits were publicized and well-known by other NBA owners and the players themselves.  So, how is this current outrage anymore despicable than the former?
Can it be explained away as degrees of racism?  Is private speech somehow more offensive and racist than publicly breaking housing laws?  It appears to me that the man is a racist .... period!  So, if you are inclined to denounce racism, wouldn't you do it in all its forms?  Why did players, of all races, continue to accept his million dollar contracts?  And why would the current Coach, who must have been aware of his discrimination lawsuits, accept his offer of $21 million to coach the Clippers?
I think we can all agree that racism is a flaw in one's moral character.  It's not a particularly attractive failing ... but neither is assault and battery, domestic abuse, sexual assault, drug possession, DWI or public urination ... moral defects that have run rampant throughout the NBA.  In fact, according to SportingCharts.com, since 2000 there have been 178 arrests encompassing the above-mentioned crimes; nearly 6 arrests per each of the 30 teams in the NBA.
Once again, I pose this dilemma ... the crime for which Mr. Sterling is being punished was for detestable and distasteful speech.  Were his words morally wrong?  Absolutely!  Does he deserve to be held accountable?  Yes!  But where was the cry for punishment against those 178 morally wrong physical actions done by the members of the same organization that is disciplining him??
This just seems to be a blatant case of moral relativism; i.e., all morals are relative to the social group within which they are constructed.  It is not OK for rich, white owners of NBA teams to spew hateful opinions of minorities -- that is deemed unacceptable by all.  However, disgustingly abusive physical behavior by members of that same minority is tolerated and virtually goes unpunished.  No jobs are lost; the fines are considerably less than Mr. Sterling's; and the players are still allowed to play within the League.  Tell me .... which of these morally wrong activities has the more damaging effect?  Offensive language; or rape, beating up your wife, assault with a weapon, or driving while drunk and endangering the lives of innocent victims?
And why is there no nose-holding over the foul-smelling way in which his so-called girlfriend tricked him into revealing his not-so-hidden racist views?  Does anyone else doubt that money or fame was in the back of her mind, or that a lawyer was waiting in the wings?  This was certainly not a "spontaneous" decision to record him.  Where are her morals?  And does that mean we are all subject to "punishment" anytime anyone wants to nail us for some comments made during a private conversation?  Isn't there some sense of illegality in her actions?
In the end, everyone in this sordid downfall needs to look in the mirror.  And that is just what Basketball Legend Kareem Abdul-Jabbar advocates in this well-written article.  It is perhaps the most sensible opinion I have heard on this whole debacle.  I urge you to read it.
Consider these thoughts on moral relativism:
“If you say there is no such thing as morality in absolute terms, then child abuse is not evil, it just may not happen to be your thing.” --- Rebecca Manley Pippert, Author.
"Truth [or morality] is what your contemporaries let you get away with.” --- Richard M. Rorty, Author.
“Whether a man is a criminal or a public servant is purely a matter of perspective.” --- Tom Robbins, Author.
So now ask yourself this:  While Donald Sterling is definitely a despicable person, are we now going to go down the "slippery slope" that fellow NBA team owner Mark Cuban warned about?  Does every word we utter become the means by which our livelihood and property can be confiscated?  A sliding scale of morality ensures that the scales of Justice will be unbalanced and inconsistent.  That's a serious and dangerous threat to our civil liberties.

Ecclesiastes 12:13    "That’s the whole story. Here now is my final conclusion: Fear God and obey his commands, for this is everyone’s duty."
Posted by Pam Kohler at 7:30 AM