National Day of Prayer Under Attack

Tomorrow, May 1st, is the annual National Day of Prayer.  As President Ronald Reagan stated in his 1983 declaration,  "From General Washington's struggle at Valley Forge to the present, this Nation has fervently sought and received Divine guidance as it pursued the course of history. This occasion provides our Nation with an opportunity to further recognize the source of our blessings, and to seek His help for the challenges we face today and in the future."
Notice that he did not advocate a particular faith, but rather implied that people of all faiths should pray that this nation would receive Divine guidance.  Indeed, the 1952 law signed by President Harry Truman [proclaiming a National Day of Prayer each year] was amended in 1988 with two stated intentions of the National Day of Prayer:  that it would be a day when adherents of all great religions could unite in prayer, and that it may one day bring renewed respect for God to all the peoples of the world. 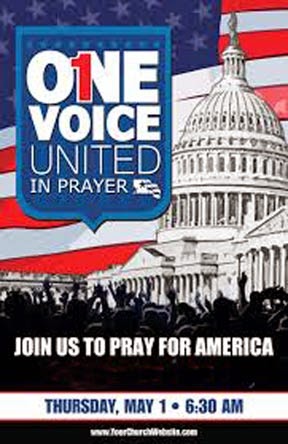 So what's the problem?  As reported by World Net Daily, this national event, which features Anne Graham Lotz as honorary chairman (Billy Graham's daughter), will also include a color guard, a military band, a vocalist and a chaplain.  That's enough for Mikey Weinstein, president of the Military Religious Freedom Foundation, to declare that "military participation in the event would suggest government endorsement of Christianity."  That's stretching it a bit, don't you think?  Nonetheless, Mikey is up to his old tricks of ridding the military of any Christian influence just to satisfy his personal leanings.
He cites the fact that he has received over two dozen complaints (really, Mikey?  That's all the argument you have?) from Pentagon workers, who object to military participation in the event.  His hatred of Believers, and Christians in particular, is evident in the following statement:  “The planned participation by uniformed U.S. military personnel in this private fundamentalist Christian religious event, run by a non-federal entity, is an unequivocally clear violation of [a] plethora of DoD regulations and instructions.  The U.S. military absolutely cannot endorse these searingly sectarian events by its public participation in them.”
The ridiculousness of his argument is on display in this outrageous statement:  “The National Day of Prayer Task Force is to the National Day of Prayer as what a National Football League al-Qaida chapter would be to the National Football League.”  Let me get this straight --- Weinstein says he takes no issue with the National Day of Prayer itself; so does he think the Task Force is "radicalizing" the event?  He seems to think that the Task Force is pushing Christianity on unwilling people.  But to compare a day when anyone can peacefully pray to the God of their choice with a group of religious zealots who want to force their faith by the edge of the sword seems a little disingenuous.
But here's where Weinstein's complaint takes on a sinister aspect.  He asked that the Department of Defense not only pull out of the event, but also reprimand those who approved military participation.  In a letter to the DoD, Weinstein wrote, "[The Military Religious Freedom Foundation] respectfully demands that [Defense Secretary Chuck Hagel] aggressively investigate and appropriately punish any of the individuals and/or organizations that would have allowed for uniformed personnel to participate in this sectarian spectacle."
Perhaps at the heart of what torments the soul of this man, and why he displays such vitriolic hatred of Christianity, is his own experience in the military.   According to Weinstein, who is Jewish, both he and his sons received physical and psychological abuse at the hands of anti-semitic Evangelical Christians while serving in uniform.  If that is true, I join him in detesting those so-called Christians who would debase our Jewish brethren.  But on what grounds does he have the authority to demand that military participation in the National Day of Prayer is unconstitutional?  None!  Why does he honestly think that a military band's presence at a National Day of Prayer that has been instituted by 34 of the 44 Presidents, should be "investigated and punished"?  What harm does it cause to anyone?  Is this a vendetta against those few who personally harmed you and your family?  If you don't want to participate ... then don't!  No one is forcing you to attend or watch the ceremony.  So why is it so important that you deny someone else's opportunity to be involved?
I am sincerely sorry that Weinstein has been a victim of anti-semitism.  There have been Christians throughout the centuries that have been guilty of this sin.  There are those in the Church today who would proclaim the same religious bias and bigotry, but I pray that not all of us Christians would be painted with that broad stroke.   And, please, Mr. Weinstein, do not condemn the entire military for the actions of a few evil men.  Your goal of removing Christian influence from the military, in what you see as "unconstitutional religious persecution", will only leave that institution open to more acts of discrimination, hostility, and injury.  If you let your anger and hatred guide your actions, your vengeance will never be quenched.
My final thought is that Mikey Weinstein doesn't need my condemnation nor my criticism.  He needs my prayers.  He has suffered great indignity and he is obviously bitter and resentful; to the point that he wants to punish the nation and the military for the wrongdoings perpetrated upon himself and his family.  But I will pray that on this particular National Day of Prayer, he will receive a spirit of forgiveness and reconciliation; that he will be able to lay down his sword of vengeance and seek the true freedom of religion that he espouses.  Our military, stripped of God, will be left without a clear sense of morals or principles, and subject to the designs of evil men.  I cannot believe that Mikey Weinstein is in favor of that.

2 Timothy 2:3-4    "Share in suffering as a good soldier of Christ Jesus.  No soldier gets entangled in civilian pursuits, since his aim is to please the One who enlisted him."