Shame On The VA!

I believe it is not too contrived to suggest that how a nation treats those who are willing to fight and die on behalf of its citizens, is a measure of how decent is that nation's heart.  And, my friends, I am heartsick over the way our veterans have been treated in their hour of need.
As FrontPageMag reveals in a pointed article, the Veterans Affairs Department can no longer hide its abominable conduct toward our military veterans who seek the medical care they are due and have been promised.  Last month, at a hearing before the House of Representatives Committee on Veterans Affairs, lawmakers from both parties accused VA officials of allowing veterans to die, due to delayed or withheld medical treatments at VA facilities.  That is unacceptable and loathsome! 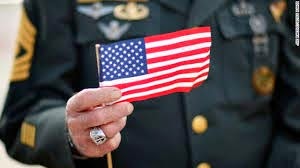 It is heart-breaking to hear stories like that of Gulf War Veteran, Barry Coates, aged 44.  Testifying before the House Committee, Mr. Coates said he is dying of cancer because a simple medical procedure was delayed at several VA facilities, including the William Jennings Bryan Dorn VA medical center in Columbia, South Carolina.  Mr. Coates testified after being a part of an in-depth investigative report by CNN.  After suffering for more than a year from rectal bleeding and seeking a diagnosis, he was told he had hemorrhoids.  Now, his condition is terminal.
But he is not the only veteran who was harmed because of lack of proper medical care by the VA.  The CNN investigation revealed that veterans waiting months for simple gastrointestinal procedures -- such as a colonoscopy or endoscopy -- have been dying because their cancers aren't caught in time.
Because of the scrutiny, the VA has confirmed six deaths at Dorn tied to delays. But sources close to the investigation say the number of veterans dead or dying of cancer because they had to wait too long for diagnosis or treatment at this facility could be more than 20.  That is 20 too many!  And more than likely that number is much higher!
Here are some further facts that are truly appalling:  In July 2011, a hospital physician sent a warning to VA administrators that the backlog for Dorn patients' gastrointestinal appointments had reached 2,500, and patients were waiting eight months -- until February 2012 -- for appointments.  Just several months later, in December of 2011, that backlog had grown to 3,800 patients.  It wasn't until September of 2013, that the VA's inspector general affirmed details of the delays at Dorn in stark language, stating that 700 of the delays for appointments or care were "critical."
Now, do you want to here what is even more disgusting?  Taxpayer money was actually given to fix the problem in September 2011, but only a third of the $1 million appropriated by Congress was used for its intended purpose at Dorn: to pay for care for veterans on a waiting list.  The explanation that the VA "redirected those dollars to go somewhere it was needed" is not good enough.
You should know that the South Carolina VA medical center is not the only guilty facility.   Internal documents at an Augusta, Georgia VA facility showed a waiting list of 4,500 patients.  The same holds true for facilities across the country.  At least 40 U.S. veterans died waiting for appointments at the Phoenix Veterans Affairs Health Care system, many of whom were placed on a secret waiting list.  A retired VA doctor, reported that there's an "official" list that's shared with officials in Washington and shows the VA has been providing timely appointments. And then there's the "secret list"; the real list that's hidden from outsiders, where wait times can last more than a year.
Yet, while veterans were getting sick or dying due to inexcusable delays, administrators got bonuses, not demotions, according to congressional investigators.  And it all makes me disgusted, angry, and very sad.
As upset as I was over the lack of medical care that my own WW II veteran father received at local hospitals, I shudder to think of how he would have been treated in the VA system.  But the thing that is glaringly apparent is that the VA Administration (and our federal representatives) have neglected the system for far too long.  Proper updates in equipment, psychological treatment, and manpower have not been implemented.  They are overwhelmed with Vietnam Vets, Gulf War Vets, and now a growing and complicated set of medical needs from two ongoing wars that have lasted over 10 years.  Sadly, I do not think things will get better in time to save the lives that hang in the balance today.   As a country, we are out of money, and our veterans are once again sacrificing their lives -- unnecessarily and tragically.  As a nation, we have failed them; and that speaks to our moral decline as well as our misguided policies and mistreatment.

1 John 3:17     "But whoever has this world’s goods, and sees his brother in need, and shuts up his heart from him, how does the love of God abide in him?"