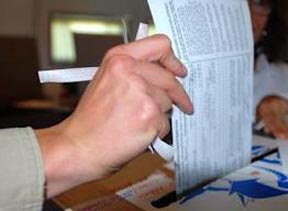 Somehow, after the Texas Primary Elections in March, I managed to misplace our voter registration cards.  Knowing that the Runoff Election is coming up at the end of this month, I decided to call off the search and just get them replaced.  I guess I shouldn't have been too surprised, as I talked to the County Clerks about voter participation, to find that the important 2014 midterms are not showing an increase in voter involvement.
I find that extremely unsettling.  I do not know of one person who has not expressed dissatisfaction at the present state of our nation --- from either side of the aisle; discontent seems to be nonpartisan.  Yet the most viable vehicle we, as citizens, have to express our desire for change is all but ignored.  Voting is essential to a free and democratic society, yet only 57.5% of the population of the country voted in the 2012 national elections.
As pointed out on the website, Global Politician, a Democracy is a nation ruled by its citizenry. In a true democratic society, it is essential to ensure a government that follows the will of the people; and not the one that force the people to follow it -- that is, a “government of the people, by the people, and for the people.”
French philosopher, writer, and diplomat Joseph de Maistre's oft-quoted warning is certainly applicable to our generation:  Every nation gets the government it deserves.  By this, he means that the actions -- or lack thereof -- of a citizenry will result in the character and morality of its government.  When nearly half of our country neglects its duty to safeguard the nation, then we are left with the natural demise of the nation.  And we can't say we weren't warned ... I would like you to contemplate the words of these wise men who exhorted us to protect our cherished liberties:

Samuel Adams, Founding Father (1781):  Let each citizen remember at the moment he is offering his vote that he is not making a present or a compliment to please an individual - or at least that he ought not so to do; but that he is executing one of the most solemn trusts in human society for which he is accountable to God and his country.

Alexander Hamilton, Secretary of the Treasury (1789-1795):  A share in the sovereignty of the state, which is exercised by the citizens at large, in voting at elections is one of the most important rights of the subject, and in a republic ought to stand foremost in the estimation of the law.

Matthias Burnett (Pastor, 1803):  Consider well the important trust . . . which God . . . [has] put into your hands. . . . To God and posterity you are accountable for [your rights and your rulers]. . . . Let not your children have reason to curse you for giving up those rights and prostrating those institutions which your fathers delivered to you. . . . [L]ook well to the characters and qualifications of those you elect and raise to office and places of trust. . . . Think not that your interests will be safe in the hands of the weak and ignorant; or faithfully managed by the impious, the dissolute and the immoral. Think not that men who acknowledge not the providence of God nor regard His laws will be uncorrupt in office, firm in defense of the righteous cause against the oppressor, or resolutly oppose the torrent of iniquity. . . . Watch over your liberties and privileges - civil and religious - with a careful eye.

Noah Webster, American textbook pioneer (1823):  When you become entitled to exercise the right of voting for public officers, let it be impressed on your mind that God commands you to choose for rulers, "just men who will rule in the fear of God." The preservation of government depends on the faithful discharge of this duty; if the citizens neglect their duty and place unprincipled men in office, the government will soon be corrupted; laws will be made, not for the public good so much as for selfish or local purposes; corrupt or incompetent men will be appointed to execute the laws; the public revenues will be sqandered on unworthy men; and the rights of the citizens will be violated or disregarded. If a republican government fails to secure public prosperity and happiness, it must be because the citizens neglect the divine commands, and elect bad men to make and administer the laws.

Daniel Webster, U.S. Senator (1840):  Impress upon children the truth that the exercise of the elective franchise is a social duty of as solemn a nature as man can be called to perform; that a man may not innocently trifle with his vote; that every elector is a trustee as well for others as himself and that every measure he supports has an important bearing on the interests of others as well as on his own.

Charles Finney (Pastor, 1868):  The time has come that Christians must vote for honest men and take consistent ground in politics or the Lord will curse them. . . . Christians have been exceedingly guilty in this matter. But the time has come when they must act differently. . . . Christians seem to act as if they thought God did not see what they do in politics. But I tell you He does see it - and He will bless or curse this nation according to the course they [Christians] take [in politics].

James Garfield, President of the U.S. (1883):  Now more than ever the people are responsible for the character of their Congress. If that body be ignorant, reckless, and corrupt, it is because the people tolerate ignorance, recklessness, and corruption. If it be intelligent, brave, and pure, it is because the people demand these high qualities to represent them in the national legislature. . . . [I]f the next centennial does not find us a great nation . . . it will be because those who represent the enterprise, the culture, and the morality of the nation do not aid in controlling the political forces.

As you can see, they all took the exercise of their voting right very seriously; they said it plain and clear ... we are responsible for the character and morals of our governing body.  And, my, how we have abdicated that duty.  The sheer number of non-voters has allowed our freedoms to slip away.  When we don't represent ourselves, we open the door to corruption, decay and evil.  We should never forget that people sacrificed their lives to preserve our freedom and our right to vote; it is our sacred obligation to exercise the opportunity they so selflessly afforded us.  True democracy in a republican form of government demands the involvement of the people --  otherwise, in absence of that participation, there is no moral government ... and our demise is certain.

Isaiah 9:16    "For those who guide this people have been leading them astray, and those who are guided by them are swallowed up."
Posted by Pam Kohler at 7:00 AM