Rebellion in the Heartland

I'm not going to sugarcoat my opinion today.  In the spirit of tolerance, progressive Christians are flirting with trouble and rebellion.  The Daily Caller has been keeping up with a project in Omaha, Nebraska, called the Tri-Faith Initiative.  Just what is this organization?  They describe themselves in this way:  Members of the three Abrahamic faiths — Judaism, Christianity and Islam -- we are committed to promote mutual respect and uphold the right to proclaim one’s own religion and serve God in his/her own way.
Nothing wrong with that, you might say.  We need more understanding, respect and trust among our religious communities.  And according to their website, this group plans to build a Tri-Faith Center to co-locate with Temple Israel, a new church for the Episcopal Diocese of Nebraska, and a mosque for the American Institute of Islamic Studies and Culture. These four buildings will form a multi-faith neighborhood of collaboration. 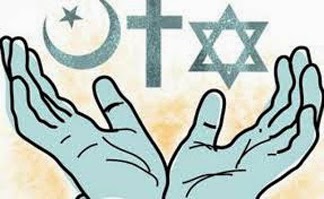 Further, their stated purpose is "impelled by visions of human harmony; a wish to share our grand and mutual heritage; that is, the belief in, and worship of, One Almighty God."  There's only one problem ... one of these isn't like the others.  And no matter how many protest, Allah is not Jehovah.
Of course, one can expect liberal theology proponents to counter with their standard lexicon of "inclusiveness, social justice, and acceptance."  In fact, this kind of project is perfect for the Emerging Church faction of Christianity, which disavows the veracity of the Bible and tends to promote political and social tenets over Scriptural doctrine.  This project also fits right in with what the President Emeritus of the Union of Reform Judaism is quoted as saying:  "Reform Jews are committed to social justice. Even as Reform Jews embrace ritual, prayer, and ceremony more than ever, we continue to see social justice as the jewel in the Reform Jewish crown. Like the prophets, we never forget that God is concerned about the everyday and that the blights of society take precedence over the mysteries of heaven. [my emphasis].”
Why can't they see that they have taken their eyes off Yahweh and His commands, in pursuit of their own efforts?  This is foolish, especially in light of the fact that the particular form of Islam to be practiced at this new Tri-Faith campus has yet to be revealed, as well as the name of the Imam, or even the sect of Islam from which the Imam will be drawn.
But there is hope that the veil will be removed from their eyes yet.  Through the diligent investigative work by The Daily Caller, it has been revealed that the Tri-Faith website includes links to groups previously named as “unindicted co-conspirators” by our government.  Specifically, these named groups are the Council on American-Islamic Relations (CAIR), and the Islamic Society of North America (ISNA).  Additionally, Dr. Mark Christian, the Executive Director of the Omaha-based Global Faith Institute, provided information that pointed to links between the Mosque organizers and the Muslim Brotherhood.
Dr. Christian knows whereof he speaks.  He is an Egyptian-born convert to Christianity from Islam. His family’s ties to the leadership of the Muslim Brotherhood go back to its founding, and his conversion to Christianity has earned him a fatwa of death, should he return to his home country.  Of course, social media intimidation was immediately directed towards him upon his announcements.
All these revelations have resulted in a debate about the un-vetted project among the citizens of Omaha.  After a radio program featuring representatives from all concerned parties, I am happy to report that the Episcopalians have withdrawn from the project, seeking a buyer for their share.  Whether it was out of true adherence to God's ways, or simply because the criticism became too uncomfortable, I cannot say.  But it is a sign of our rebellious times that there is sure to be another liberal denomination who will step in to assure this interfaith project in the name of "unity and love."
For the moment, Satan has been hindered.  But do not doubt that he will continue in his efforts to infect Christianity with his Godless temptations.  As long as Christian leaders embrace such notions as "Chrislam", the Devil will seek to merge apostate Christianity with his own brand of "religion".  And this project in Omaha, Nebraska is merely the beginning of the "falling away" that our Holy Scripture foretells.  We must gird ourselves with the Truth and take up our Shield of Faith … the Enemy is positioning himself for battle!

Acts 20:29-30   "I know that after my departure fierce wolves will come in among you, not sparing the flock; and from among your own selves will arise men speaking twisted things, to draw away the disciples after them."